Completely destroyed in an engine shed fire in Nuremburg in 2005 and rebuilt in 2011 from the ground up. The story of the locomotive 01 150 is quite unique. Trix honours this particular locomotive with a model of the prototype as it looks in 2011.

The Trix model depicts the steamer 01 150 as it looks in 2011. In other words we are dealing with an era VI (modern era) locomotive which can pull your museum trains around your modern layout. The class 01 along with class 02 was the first class of the German State Railway Company (DRG) founded in 1920.

The boiler of the renovated 01 150 is a completely new (2011) welded construction. The old boiler was too damaged and can be seen today at the German Railway Museum in Nuremberg. The 01 150 now has Wagner smoke deflectors where as it used to have the smaller Witte smoke deflectors. The prototype today looks almost as it did on that Saturday in October 1935.

Constructed almost entirely of metal the Trix model follows the Märklin way, which makes it a quite nice model. The locomotive is big, heavy and a great puller. The motor is placed in the boiler and connects to the traction wheel using a snail. The traction wheel is fitted with rubber rings for better traction.

There are several details on the model and I think it resembles to prototype well. I am not an expert on steam locomotives so there might be some mistakes or things missing that I have not noticed. The new boiler on the prototype means a changed smokebox door at the front of the locomotive. Which is why you will notice that the 01 150 lacks the door handle on the smokebox door, where as its sister 01 118 has it. Nice detail. 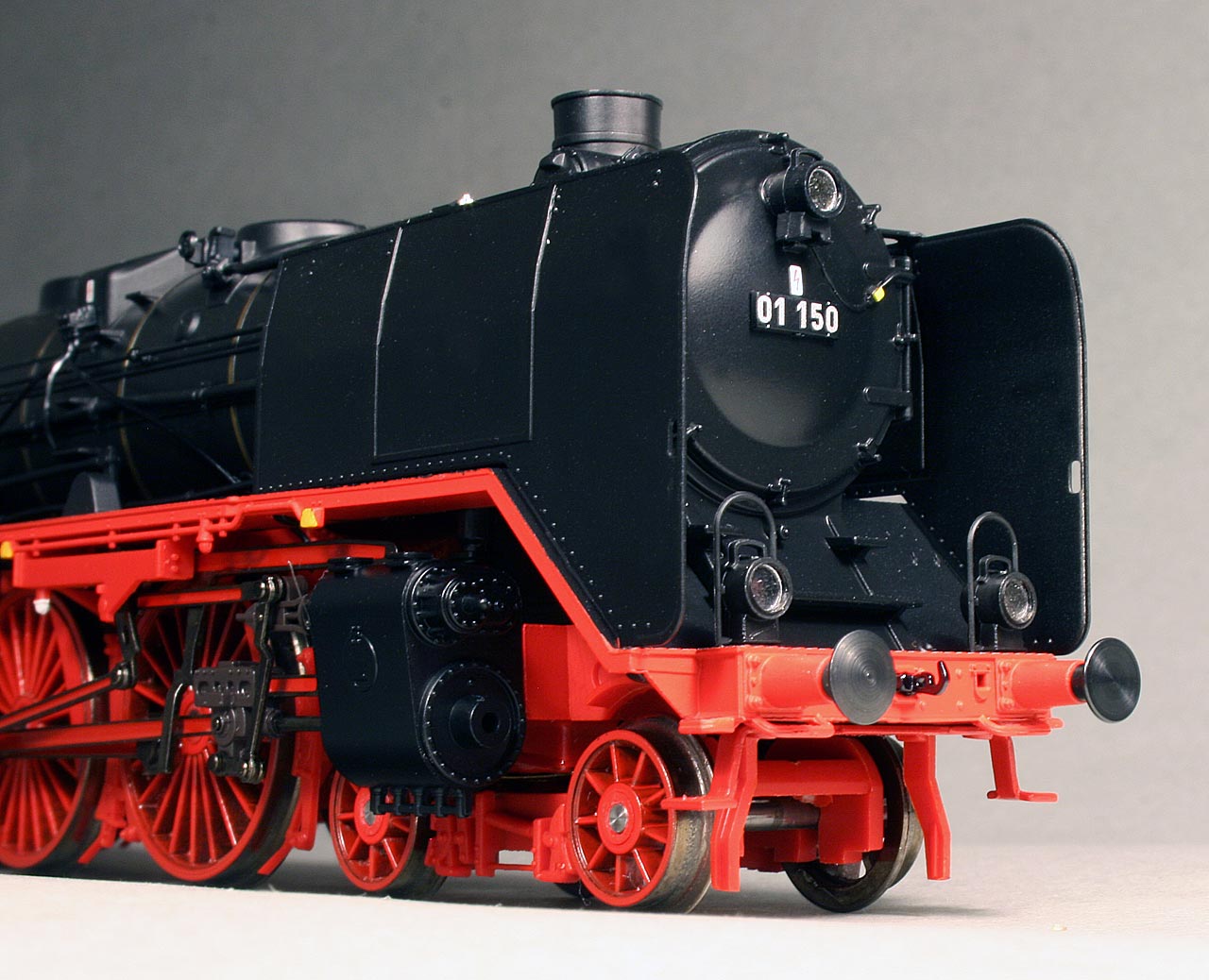 One immediately noticable thing is the way that Trix did not care to seal of the light source of the front light. The consequence of this is light coming up through the chimney (smokestack). Although easily fixed, I think a 450 euro model should not have problems like this. It makes the model seem cheap.

The revision date of the locomotive says '11. Which I guess must mean 2011. This places the model in Era VI, good for modern era guys like me, but if you like previous eras and do not care about revision dates, you can run the model from Era II and up. Although the prototype did have Witte smoke deflectors from around mid Era III until it was destroyed in the fire in 2005.

The small ladders on the back of the tender are made of metal as well. The tender has NEM coupler pockets in both ends with short coupler kinematics. The distance between the tender and the locomotive is approx 5 mm (0.16 inches). The coupler allows for the distance to be reduced to around 2 mm.

Technically the model is based on the previous designs that work so well. There does not seem to be any special design around this particular model. As previous mentioned the motor is placed in the boiler and powers just one of the axles. The rest of the axles are powered by the rods. The tender is unpowered and contains the sound equipment. The decoder is a Märklin/Trix standard DCC decoder with the usual feature limitations (compared to LokSound), but definitely a good decoder that gets the job done. A long with the locomotive is a small instruction booklet that explains the features of the decoder.

The model is equipped with warm white LED lighting on the front of the locomotive and the back of the tender. A flickering red LED is installed to immitate the fire in the firebox. The firebox can be turned on and off using function 6. There is no additional lighting. Unfortunately the front light shines through chimney when no smoke generator is installed. You can install a smoke generator (type 7226) from Märklin. If you do not want to install a smoke generator, you could put some black paper in the chimney to block the light from coming out.

Default sound volume is way to high. I started out with reducing it from 255(!) to 16. At the level of 16 you can just about hear the steam engine and nothing more. Lower than that the real noise from the locomotive takes over. With regards to the noise, the running noise is fair, but not that silent. I have seen Roco models do better. The sound scheme is a standard Märklin steam locomotive and to my knowledge not an actual class 01 sound scheme. Not that it matters that much to me. The locomotive whistle is deep and beautiful!

I love this locomotive I really do. It has been on the top of my wish list for ages and I think the class 01 is one of the most beautiful steamers ever built. The small details and the digital functions makes this model very exciting. The model comes in a fine wooden box with a picture of the prototype and a 20 minute movie (in German) on restoring the prototype from scrap to its former glory.

If you are a modern era enthusiast, with a little love for steam, you should go ahead and get this locomotive. 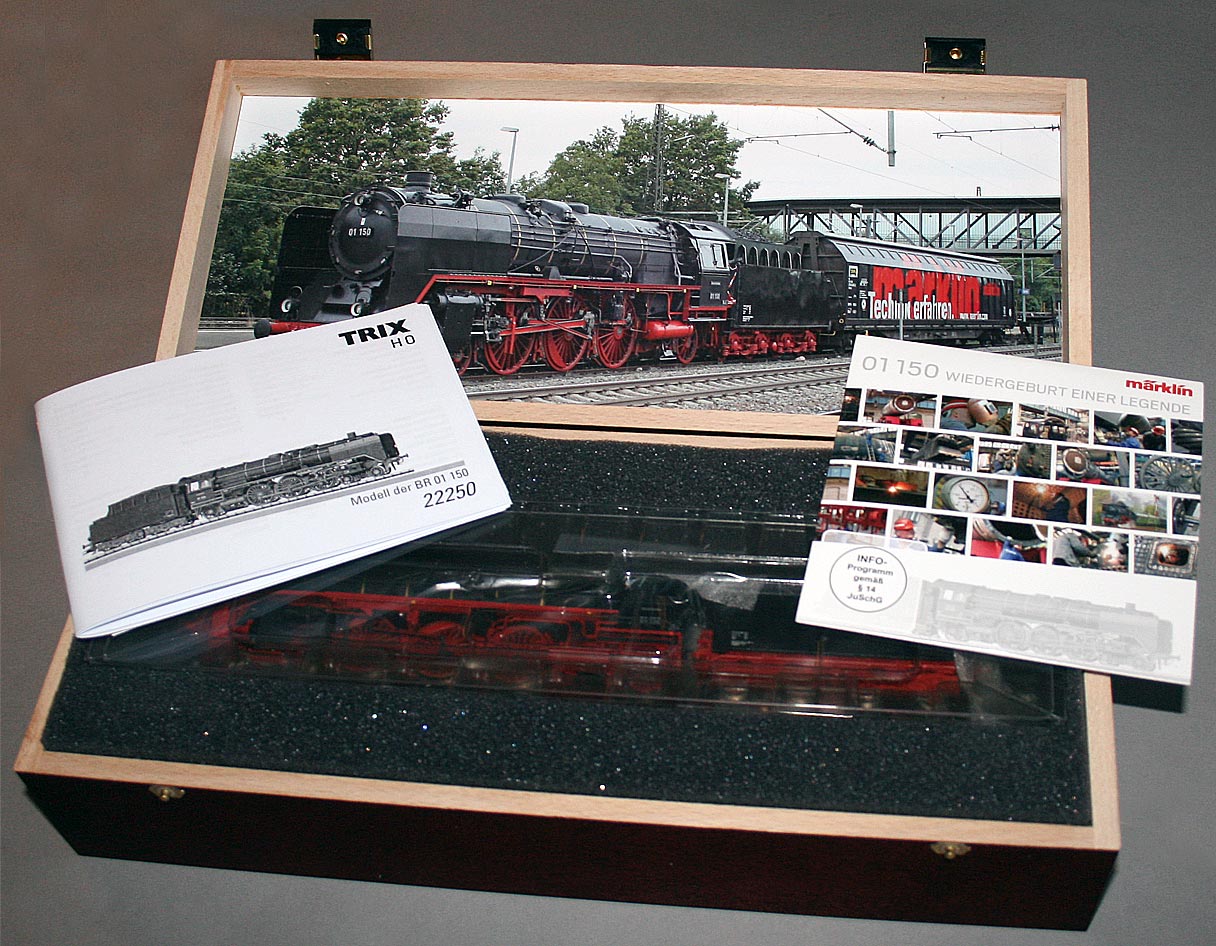 Looking at the picture in the wooden box, I just had to have the freight car following the locomotive. I mean, how can you resist the look at peoples faces when you put a train together like this. :-) "It never happended", they will say, and you can pull out the picture and say "guess again"...