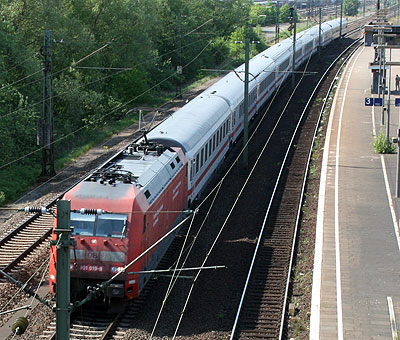 I have researched into German IC consists and this is a summary of the information that I have found. For this exercise I will use the coach lettering only, so you can follow along using your own model coaches, which would have the same or similar lettering. If you are unfamiliar with coach lettering I have provided a small crash course near the end of the article.

Now let's see what all this means. We have two first class coaches, a first class restaurant coach and three second class coaches of different types, the latter beeing a driving trailer coach. Looking at the tables on www.fernbahn.de, we will find a train, that can match these coaches.

I have found the IC2362 going from Munich to Karlsruhe. It consists of the following:

We are missing the Bvmsz, which is a second class coach with compartments and room for baggage. Not to worry, we will pretend it is broken and cannot run along.

Now for the model counterpart. In order to construct a prototypical consist, you will have to look closely at your coaches and find the lettering matching the ones from the fernbahn table. The lettering gives away a lot of information about the coaches, we will use this information to construct the train.

If we leave out our Bvmsz and replace the driving trailer coach the train will now look like this:

Notice the coach named Bpmbz? This is a special coach since the small "b" means it is fitted for handicapped people with sections for wheelchairs. This coach must be close to the baggage coach. I do not know if this is a rule, but every consist seems to follow this pattern. Since we have no baggage coach, we leave the coach close to the dining coach instead.

The Apmz coach almost never runs in consists with the Bimdzf driving trailer coach. I do not know if this is a coincidence, but it makes the use of the Apmz unprotoypical, we will make an exception in this case. Afterall modelling is always a comprise and theoretically the consist is still possible, thus making it good enough for me.

The Avmz is a coach with compartments, the "v" gives it away. The "p" in the Apmz means "no compartments" (Grossraumwagen). The A of course is first class.
Since the fine people sitting in their compartments in the Avmz should not be disturbed by the lower ranking people from the Apmz running back and forth between the dining coach and their seats, we put the Avmz coach closest to the locomotive. In between the dining coach and the Avmz we put the Apmz (Grossraumwagen).

The planning of our train is now almost complete. If we put it together using the Roco coaches it will look like this:

A small train, but almost prototypical. It could use a little more of the Bpmz coaches, as they tend to be the most used. You will have to wait until new numbers are released or, if you can live with your coaches having the same number, you can go ahead and buy a handfull. ;-)

There are several Bpmz coaches from Roco on E-bay from earlier releases. You can buy them as well.

Another funny thing is to put a driving trailer coach in the middle of the train. This happens on several of the consists from the fernbahn tables. And it is always a conversation starter, when some visitor to your layout, claims it to be "totally out there and unprototypical". I have seen these consists myself, so they are perfectly legal. I even have it on video.

Which loco to use?

I know there are loads of exceptions to what I am about to write, but this post is about TYPICAL operation, not all the funny special cases.

If you leave out the driving trailer coach, say you would like to create an international train, perhaps a trip to France, you have more choices. I use the BR 181.

Especially the BR 181 is an exciting locomotive, because it will let you use the 181 206-4 in the original blue colour and with the old Bundesbahn logo. The locomotive runs this way because it is being preserved as a museum locomotive. Roco has a model of this locomotive for both DC (63716) or AC (69716). It fits right onto your era V IC coaches.

This pretty much rounds it up. I hope you can use this information.

Now a crash course in coach lettering (I will not get into all the details, and there are more letters than the ones mentioned, if you have questions feel free to ask):

A = First class.
B = Second class.
D = Baggage compartment.
AB = First and second class (first class department indicated by a thin yellow line above the windows)
WR = Restaurant coach with either A, AB or B lettering.
AR = First class coach with seating department, a kitchen and a dining room.

p = Long distance coach or short distance coach with aircondition and center aisle.
v = Long distance coach with less than 10 A compartments or 12 B compartments.
i = Coach for the InterRegio in connection with the letter m (eg. Bimz)
m = Long distance coach longer than 24,5 meters. With 10 A, 12 B, 5 B (if AB), 6 B (if BD) compartments.
s = Sidewalk along the baggage compartment and baggage compartment or sleeping coach.
d = Bicycle compartment
b = Fitted for handicapped people, with special extra space for wheelchairs etc.
k = Fitted with eiter a dining room, small buffet or wending machines. Think of "k" as kiosk.
z = The coach is fitted with a central electical heating system.
f = The coach is fitted with a driving stand (driving trailer coach). "f" alone says something about the technical connection to the locomotive. If "f" is combined with the "u" some other techinal demands needs to be fullfilled. This is very technical, but you can think of "f" or "fu" as a driving trailer coach.

Now we can guess and find out, how I knew the details about our missing Bvmsz coach:

I hope this clarifies some of the questions about IC operation.