When the Danish State Railways (DSB) in early 1950’es needed new engines to replace the expensive steam locomotives they turned to the Swedish manufacturer Nydqvist & Holm Aktiebolag (NOHAB) for a prototype of a locomotive fit for the job. The result was the class MY. NOHAB delivered the first MY in 1958 and continuously delivered them until the mid 60’es. The class MY quickly became a legend on the DSB network and the distinctive rounded look appealed to many people. NOHAB also produced locomotives for other European railway operators, whereas the Belgium State Railways are one of the well known customers as well as the Norwegian State Railways (NSB).

The construction of the locomotive took place in Sweden and Denmark. The Danish train manufacturer FRICHS in Aarhus produced the frame and the bogies. MY 1125 was the first locomotive with its number painted on the front, until then, locomotives only had their number on the sides.

On Saturday August 17, 1957, MY 1125 arrived at Helsingør harbor and started doing service on the island of Sealand from 1957 until 1984. In 1984 it received the legendary design paint scheme (Red/Black) and was transferred to the Jutland peninsula where it remained until 1994. In 1994 it got an environmental overhaul and was transferred back to Sealand and named “Ketty”.  The following years it went back and forth and ended up in Jutland in 1997/1998 until it was finally sold to Eichholz in 1999. Eichholz later became Strabag Rail.

During its period at Strabag it received the Santa Fe paint scheme. Late 2010 MY 1125 was sold to a private person in Hungary. A Strabag owned MY is often seen in front of freight trains and often with freight cars from the Dutch wagon rental firm RailPro.

Roco has done a well job in creating the model of the class MY. The model molds are not entirely new as there have been several MY models during the past years, but this has no influence at all on the look of the model.

Although there are some noticeable differences from the prototype, especially around the nose and windows, they are not eye-jumping. The side windows are a bit longer in reality. On the front of the prototype the headlights are smaller than the top lantern, on the model; this is also the case, but due to the way the light glass is fitted in the model, it looks as if they are all the same size. Nothing that I mind though, but I know, that some of my fellow model railroaders see this as a huge mistake.

The boggies are very well detailed and so is the printing on the model. The NOHAB factory plate is in place, mounted next to the driver stand door. This is a fine little detail. There were only little attachable parts, which is good, you can take the model from the box and put it straight on the track. I personally prefer to give it a bit of light weathering as it is kind of bright and shiny, but because of the very fine paint scheme I will only weather it very light.

The model is constructed on a die cast metal frame it is very heavy, which gives it good running characteristics. The locomotive has all six axles powered by a standard Roco engine five-pole engine with a fly-wheel as found in all other locomotives of the same size. The headlights will change from white to red with the direction of travel.

Flipping the model bottom up shows us that the cog wheels in the gear box lives in an enclosed space. This is very good - an of course - typical for a Roco model. An enclosed gear box prevents the cog wheels from picking up dirt and dust from the layout and they need far less cleaning and oil.

The engine is fitted with a 8-pin decoder plug and has short coupler kinematics. Unfortunately no PluX plug or LED lighting.

The running characteristics are typical Roco, which means extremely good. The model slides silently around on the layout without any noticeable engine sound. This is particularly good if you later want to put in a sound decoder, then you can keep the decoder volume at a minimum because you do not need to drown out the engine noise. I have replaced the couplers on my model with my coupler of choise, the Roco Universal coupler. 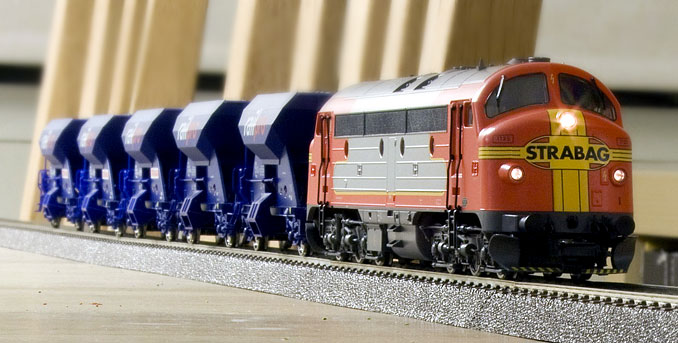 Prototype photos: Søren M. Andersen. Model photos: Søren Jacob Lauritsen. For this article I am still looking for pictures of MY 1125 that I can borrow and put in the article. Especially in DSB livery.