Review of the Roco Class 155

In 2009 Roco released a brand new H0 model of the Deutsche Bahn AG class 155, an old East German design that made it all the way up till today, where it still operates in almost all of Germany. I recently bought this model and thought that I would write a review. 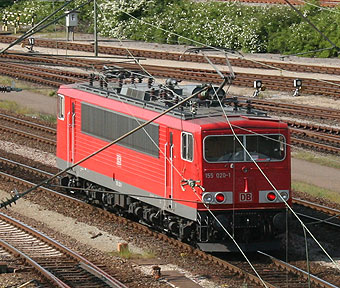 The story of the class 155 (former 250 of the Deutsche Reichsbahn) is the story of an all purpose work horse.

It all begins with the expansion of the East German electrified railway in the early 1970's. In 1973 only 1.000 km (621 miles) of the 14.000 km (8699 miles) railway in East Germany was electrified. Then came the oil crisis and the East German government quickly decided to expand the electricfied railway and go for electric traction power instead. This called for more electric locomotives to substitute the old steamers, diesel locomotives and the pre-war electric locomotive E94. The answer to this demand was the prototype of what was to become Deutsche Reichsbahn class 250. In 1974 the prototypes 250 001 to 250 003 was delivered and ready to undergo extensive testing. A few years later in 1977 the production began with the 250 004 as the first in a series of 270 locomotives.

The industrial look of the locomotive lead to nick names as Energie Container (energy container) and Kabelcontainer (Cable Container). Because the locomotives were needed fast, the design of the electrical system did not cause that much new development and is mostly based on the well known best practices and parts of its time.

When Deutsche Reichsbahn and Deutsche Bundesbahn merged in 1990 the class 250 was renumbered to class 155. In 2006 all locomotives had been painted in the well known traffic red color scheme. Through the years the old pantograph was replaced with the Einholm Strombabnehmer (Einholm Pickup) type DSA 200.

All locomotives are registered in Seddin from where they travel around entire Germany in front of heavy freight trains.

I must say the class 155 is one of the finest models I have ever seen from Roco. There, I said it! The detailing is just amazing and very, very well made.

Details like the small pipes on the sand boxes is not something you see every day. I had to take off some of the details, because they would simply break when the locomotive is in everyday use. Taking off some of the smaller parts, does not matter that much, since you will not spot them anyway on an operating layout. I will save the parts and use them if I put the locomotive on display.

Almost all parts are factory mounted. 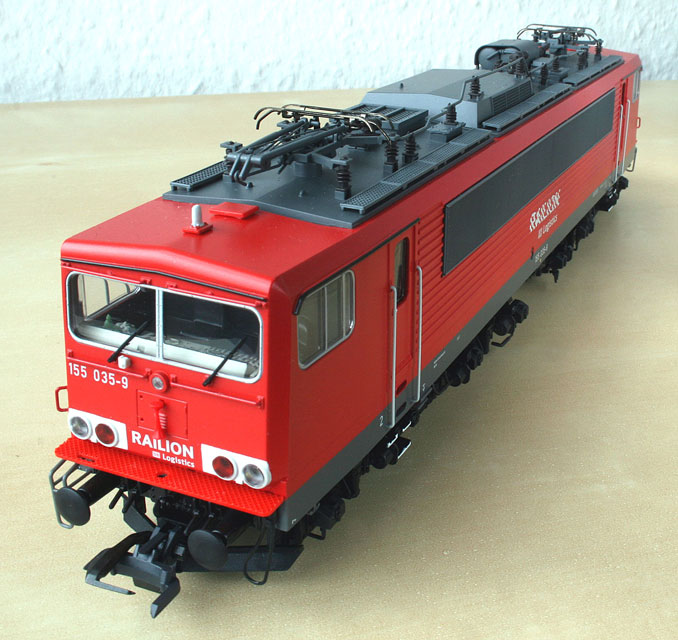 The roof of the model is also very detailed with all the small isolators in place. The model of the class 155 is prototypically correct fitted with the Einholm pickup of type DSA 200. Roco also fitted their model of the class 155 with warmwhite LEDs and red taillights. The taillights needs some reduction in the power they get, because they really, really light up, but fortunately this is easy to do with a decoder or modifying the electronics.

The interior is also amazing, just take a look at the dashboard of the locomotive. Notice the mounted break handle.

The fine details and the smooth running really makes this locomotive worth its price. Roco did save some expenses though for one thing the pantographs are for show only. You cannot use them to pickup power. I can imagine a lot of customers today have digital layouts, so I guess they wont need an extra pickup anyway.

The locomotive has a center mounted engine with a flywheel and cardan shifts drive all six axles. The same goes for the three rail version, which is very good, since Roco some times changes the boggie on three rail models in order to make room for the pickup shoe. 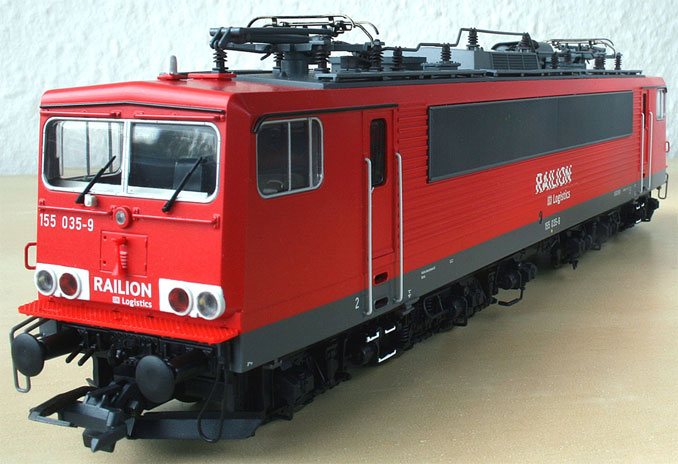 This is one of the greater models of the past years and if this is to be the new Roco standard, then I am going to look forward to the next new developments from Roco. The model is available for just around 179€ which brings you good value for your money. Roco has also released a Deutsche Reichsbahn edition of the model as class 250, here the top front light has prototypically correct been moved to the roof.

And for once Roco released not only one locomotive, but two locomotives so you can buy another one with a different running number. This is great for prototypical double traction in front of heavy freight trains.

The Model at the Roco Web Site

The following sources were used in this article.