The Station Building and Prototype 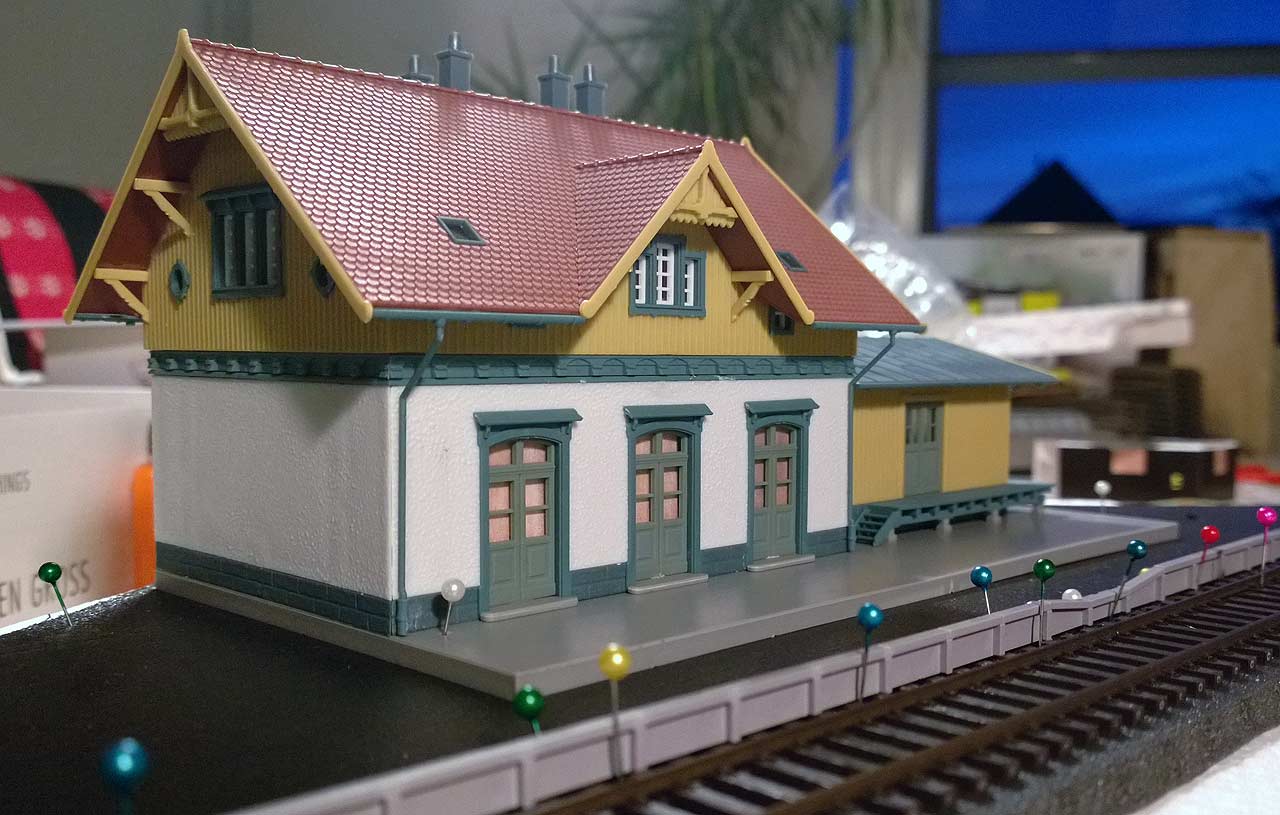 The station building test-fitted into my diorama

Auhagen produces several stations of similar architecture, most of them based on the "Krakow am See" kit (Auhagen #11381). These stations have a north-east German look. For my railway I wanted to go with a more southern German appearance, so I went with the kit "Blumenfeld" (Faller #110097) from Faller. This station is actually a fictivious station, but it is based on another kit "Güglingen" (Faller #110107), which is a real station building. 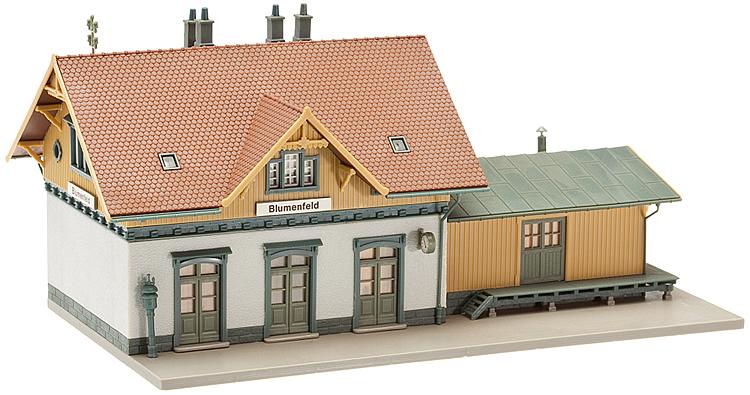 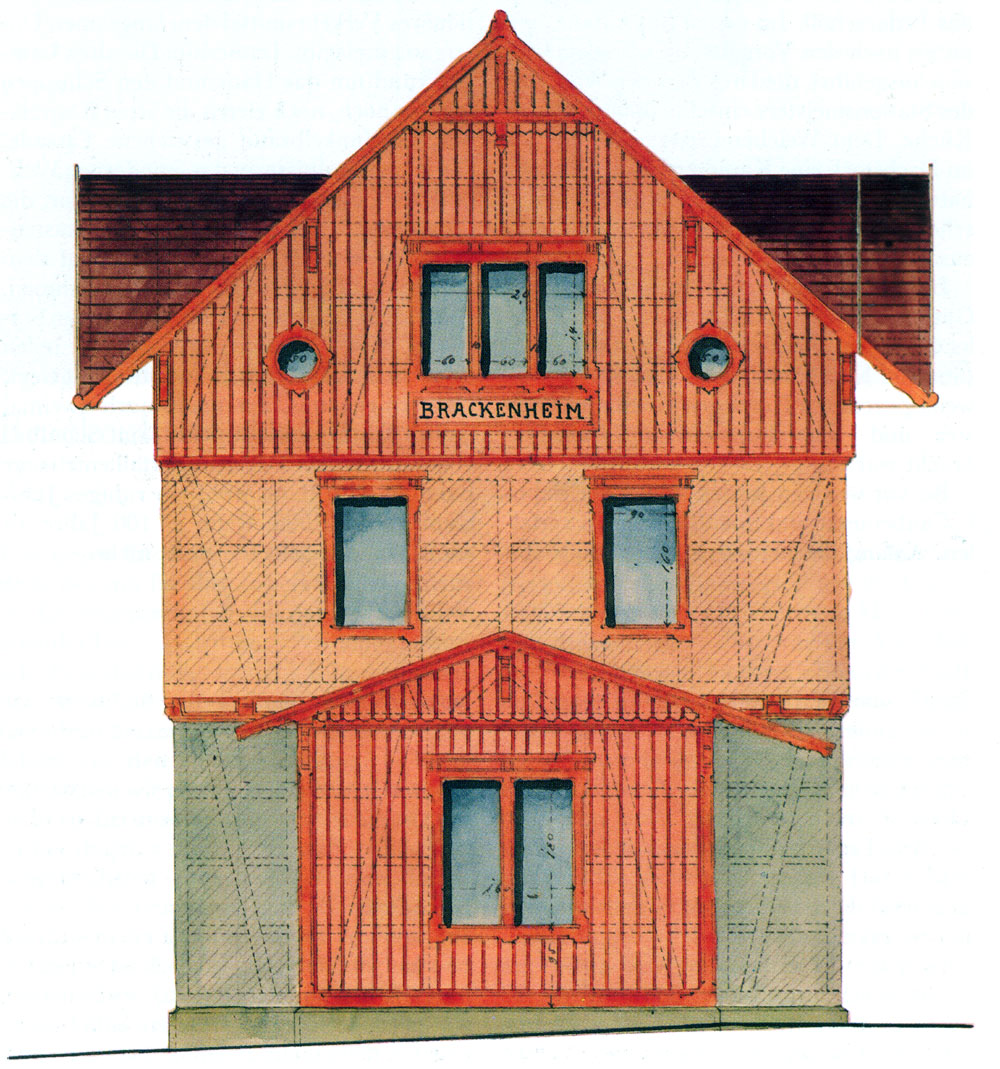 Güglingen was a station on Zabergäu Railway a branch line from the Franconian Railway. The station building is very common in these areas, as it is a standardized building design called "Württembergische Einheitsbahnhof typ. IIIa" (Württemberg Standard Railway Station Building Type 3a).

The station building of type IIa and IIIa are well known, and thus models are very easy to come by. Faller's Güglingen is a type IIIa station building. Kibri produces a model "Dettingen" of the type IIa (Kibri #39507), and you can buy a real wooden kit "Kupferzell" (it'll cost you) from Busch (also type IIa) (Busch #1468).

The key here is not to look at the station name, but the building type. All buildings originating from the Württemberg design, will have similar features and will go together on your model railway. Great!

The "Blumenfeld" kit from Faller is a freelance version of the IIIa design, with the third floor missing. To my knowledge no such station building exists or have ever existed in reality. The designs I and II all had one and three floors respectively. Does not matter though, because the building looks like a smaller version of the bigger one, which was what I was going for in the first place. 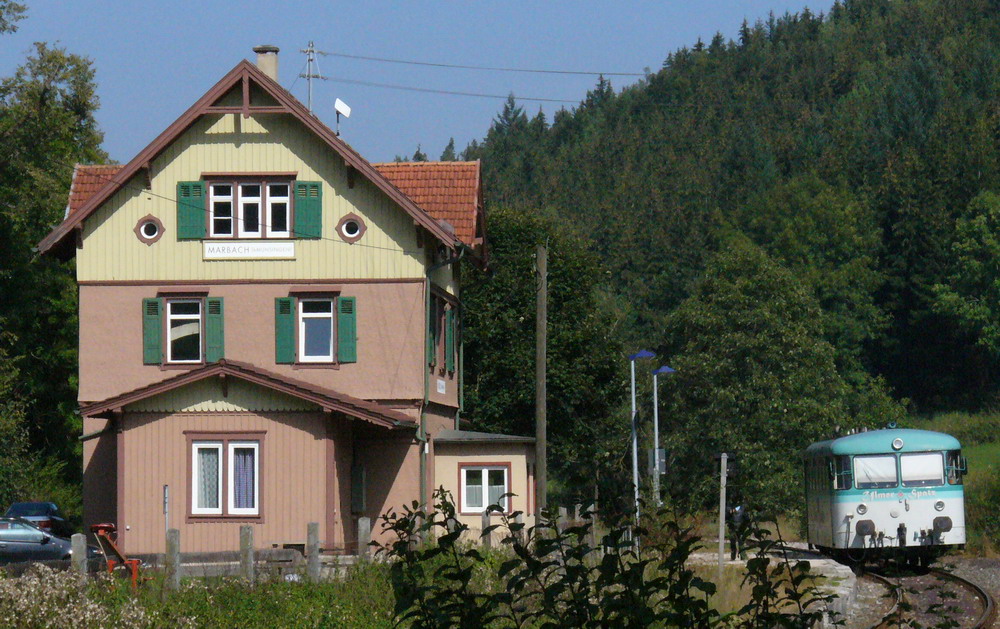 The station of Marbach in 2006, photo by Klaus Enslin via Wikipedia

As usual with Faller kits, they come in a nice cardboard box which you can use for storing stuff afterwards. Faller included a storage label with the box. Obviously, you also get building instructions and you get several different station names to put on your station. I have not decided on a name for my station, and I do not know if I will use one of those in the box, or come up with my own name.

Before I started assembling the building I painted all the plastic parts with a matt varnish using an airbrush. I did this to kill the plastic glow that most plastic kits suffer from. I use trusty Vallejo Matt Varnish (Vallejo #70.520) for the job. When the building is complete I will weather it using different weathering techniques.

I will use this model in a small winter diorama with the theme "a small station on a winter day". The first thing I did was to test-fit the baseplate to see how much space the building the building will take up. 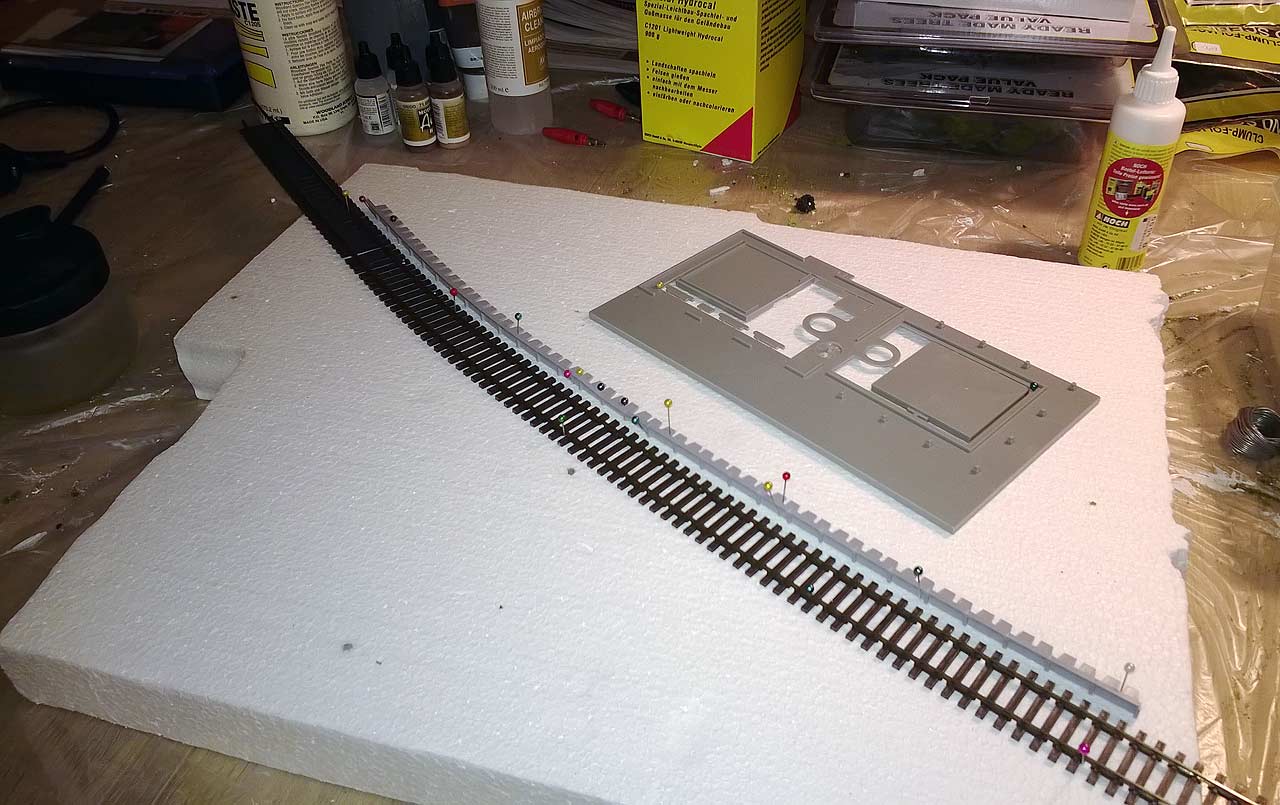 I test-fit the baseplate and station platform to get an idea of the size.

Because of the quality of this kit, assembling the station is very easy. All the bits and pieces fit together with no problems at all. The instruction tells you to glue the station building to the base plate, but I would not recommend doing that, if you want to be able to service any interior lighting, because the instruction also tells you to glue the roof on. I usually build my base plates into the layout, or create a different baseplate, so I glued the building together with the help of the baseplate but without gluing it to the building. 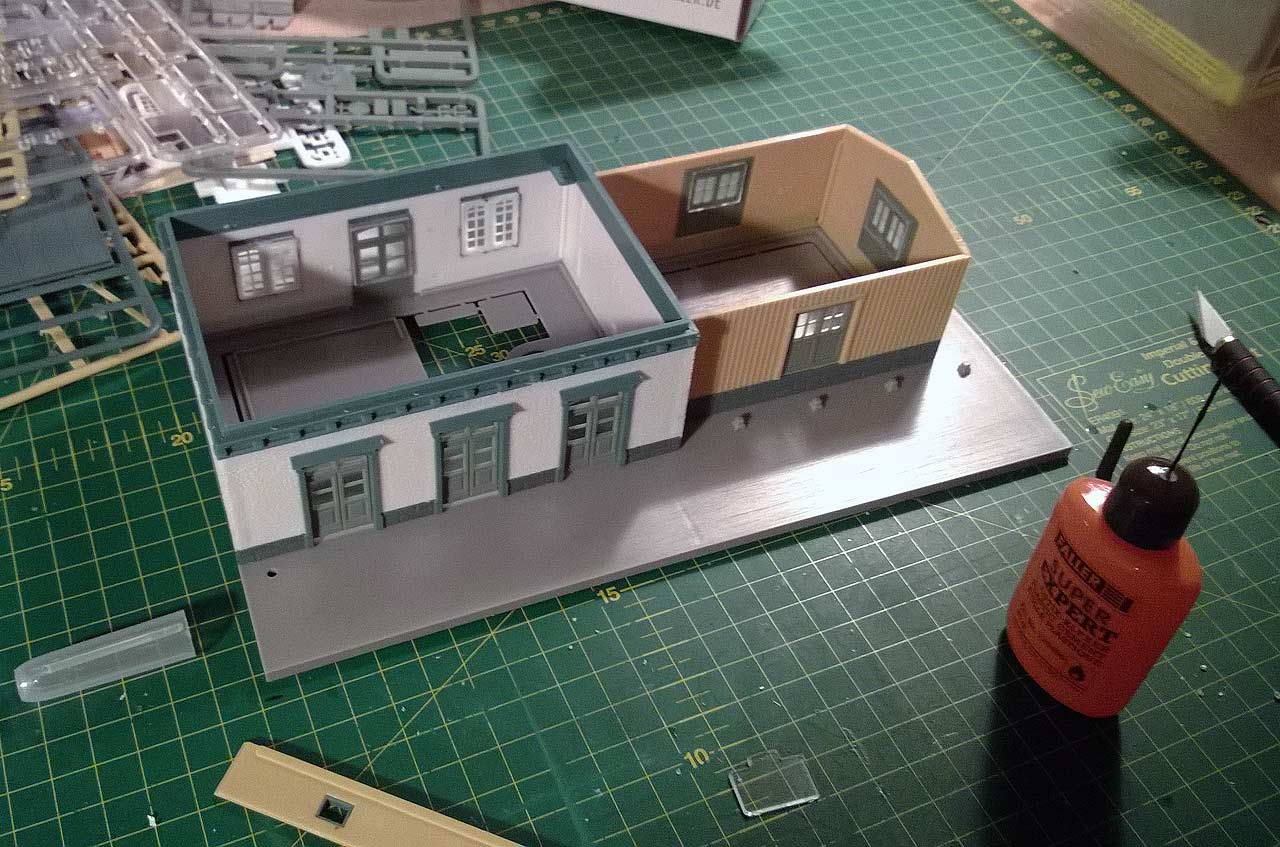 When gluing building together I use a technique I have learnt on the Auhagen YouTube channel. People tend to think, that you need a lot of glue to build plastic kits, but what you actually need is almost no glue. Gluing plastic together is not like gluing paper. Gluing plastic is more like welding or soldering. You weld the pieces together to form a strong bond. The glue simply starts the welding process.

The Auhagen YouTube channel has a video demonstrating how to create details with windows and doors. In the process, they also show how they glue plastic pieces together. Take a look, even though the video is in German, you should get the general idea:

It is much easier this way. When gluing the window glazing this technique will help you not to get any glue on the windows themselves. Just a few small blobs of glue on each side of the window and it will hold. 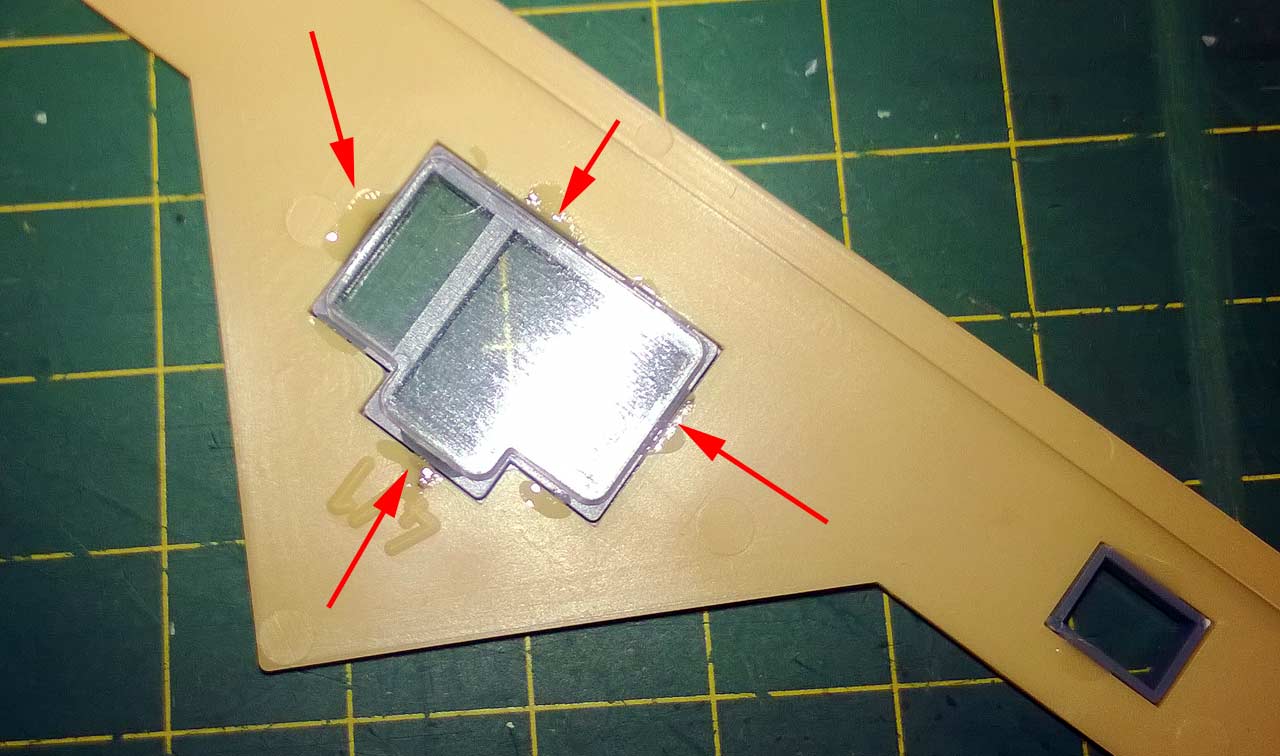 I put a small blob of glue where the arrows point.

Another great benefit from gluing this way, is when you realize you put the glazing on before the actual window detailing, and have to take the model apart again, you will be happy that the windows is only held in place a few places instead of all over. Trust me on this one. 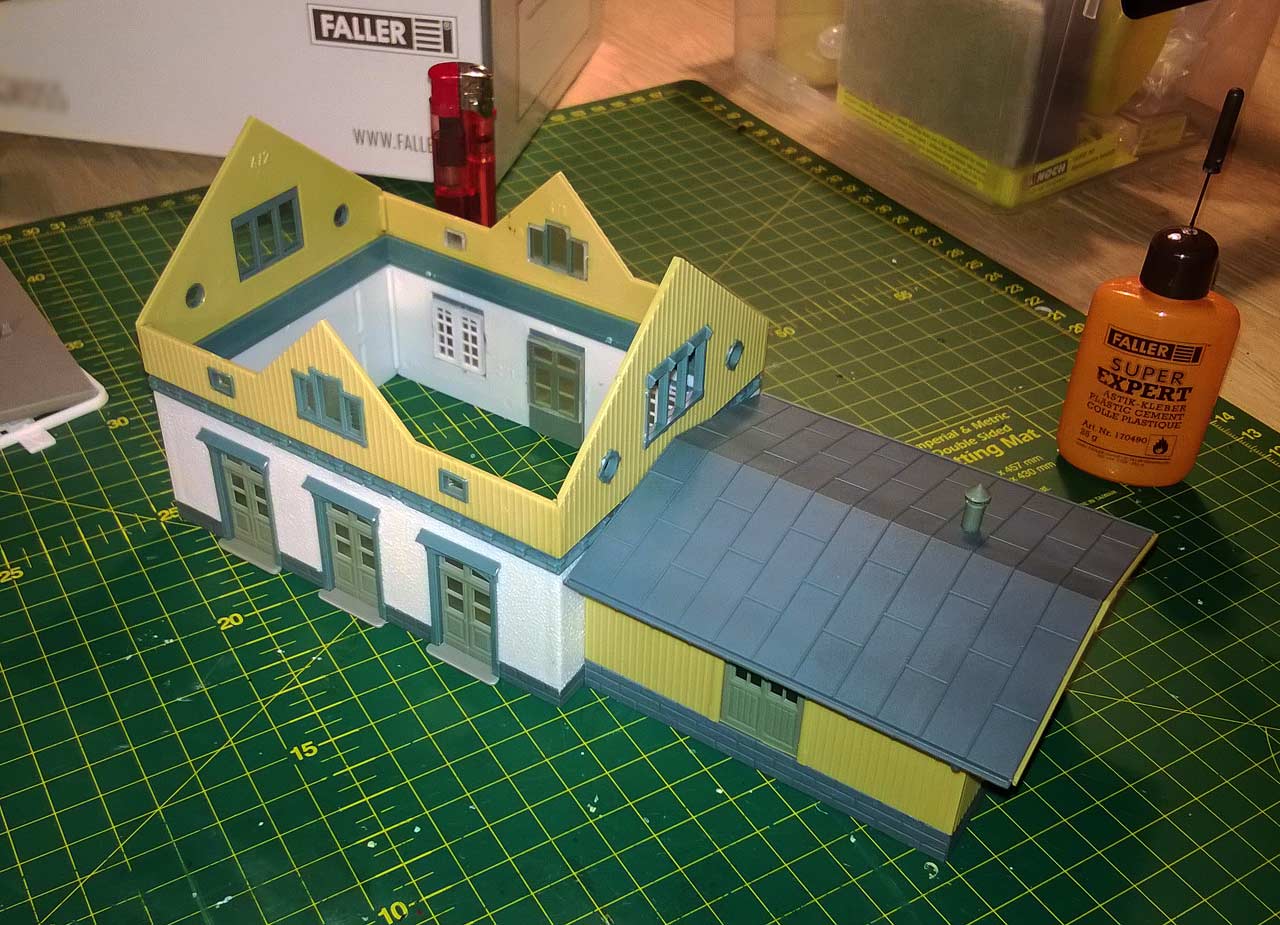 The roof on the storage building is loose.

I glued all the small plastic parts together before finally assembling the building. That way you only need to concentrate on getting the walls straight and getting the roof on. 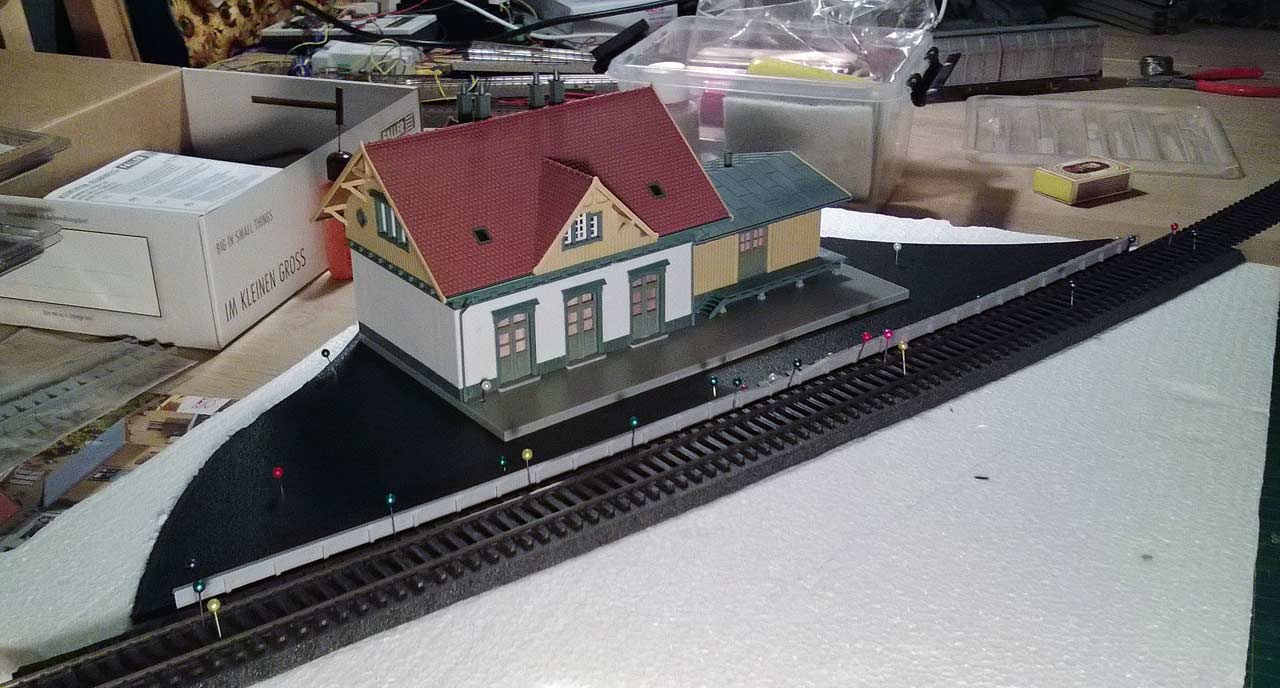 Test fitting the station into the diorama.

Now that the building is complete I will continue on prepping the diorama baseplate for the winter theme. I will take pictures of the process, so eventually an article will show up.