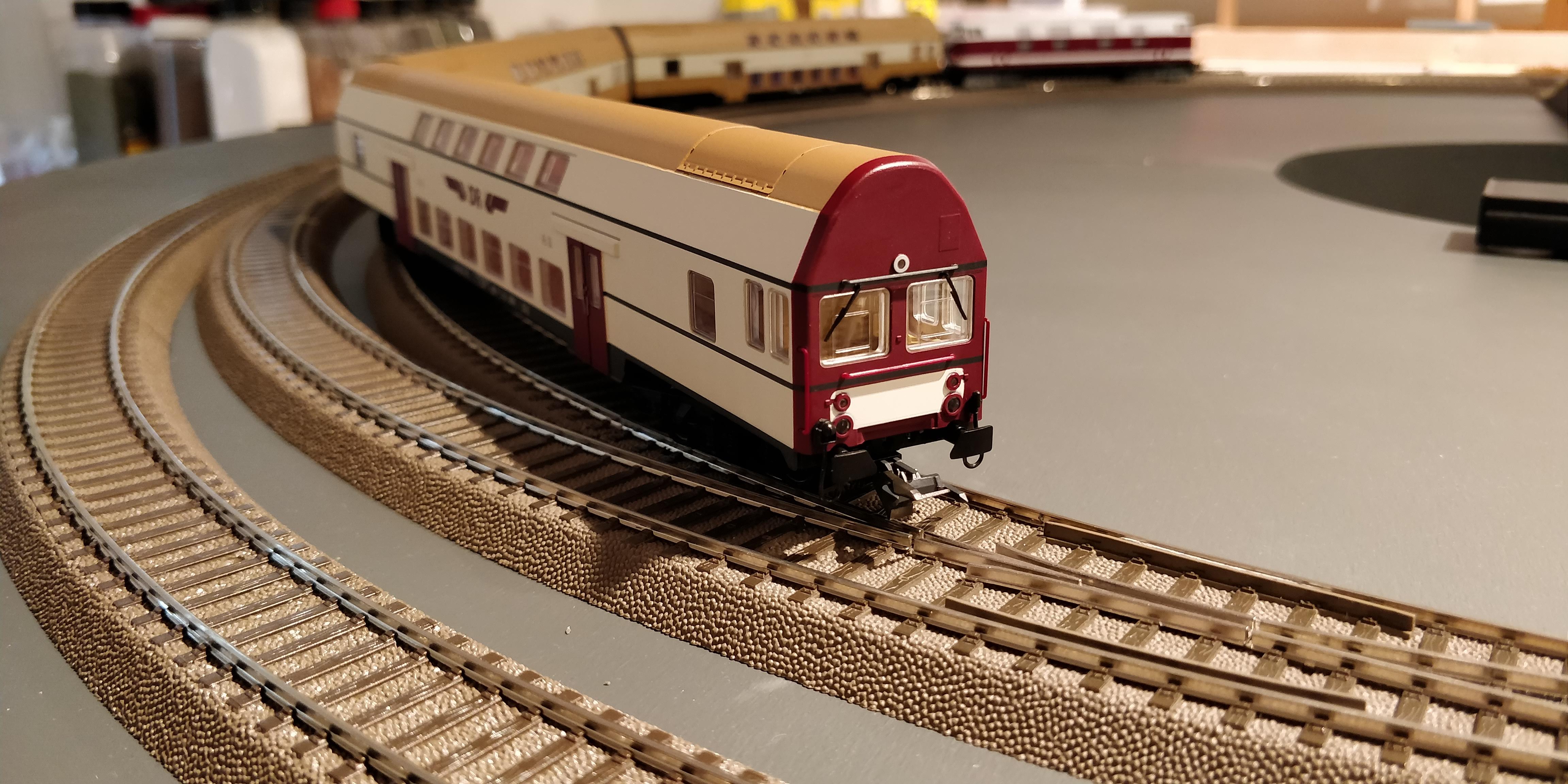 I recently installed a couple of the larger radius curved turnouts on my layout. They look great and work absolutely fine, but when combined with rolling stock from other manufacturers than Märklin/Trix, they introduce an unexpected problem with bogie type wagons and coaches: Derailments.

Derailments are a pain no matter how you look at it and I have zero tolerance for derailments on my layout, so I started to investigate the problem. You see, Trix C track is usually very reliable track so it was rather unthinkable to me that it would cause derailments.

The root cause of the problem is that the flanges of the wheelsets hits the tip of the center of the frog when going through the turnout on the inner track. Hitting the frog will cause the wheel to jump on top of the frog and run anywhere from there. The coaches don't derail on the outer track.

The next thing was to figure out why this happened to some coaches and not others.

Take a look at this picture, it can be hard to see, but the flange sits on top of the frog. This coach will derail or jump at best.

For comparision here is how it is supposed to look, you can clearly see that the wheel sits inside the frog. 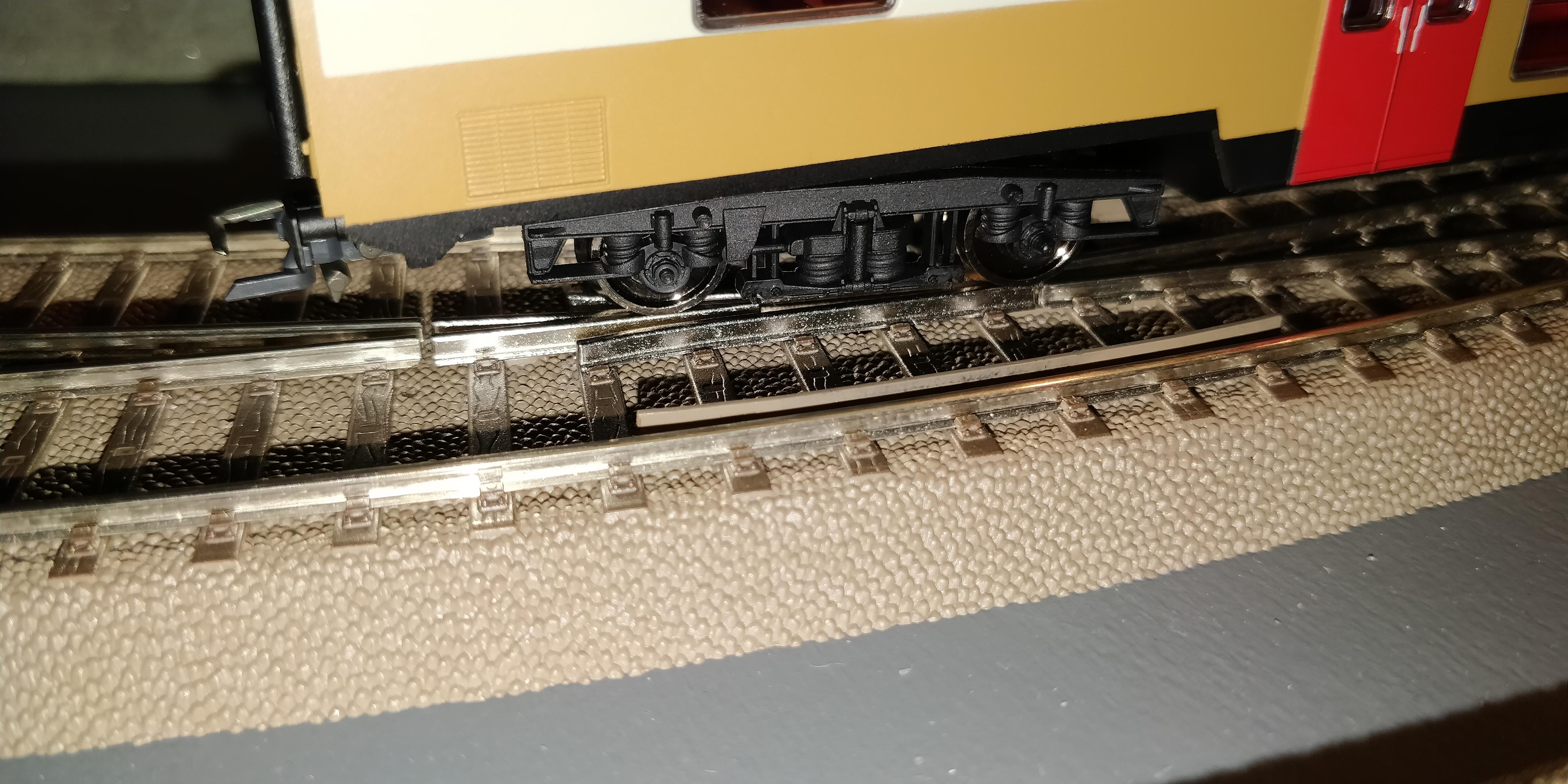 I have used Trix C track for over 10 years and not had a single problem with derailments. I have had zero problems with the Märklin and Trix rolling stock running through the curved turnouts, including bogie type wagons and coaches. Then it occurred to me that using solely Trix and Märklin rolling stock might be the reason I have not had any problems. Not that they are better or anything, but there might be something in the design of their wheelsets that make them work without problems.

I run 2-rail and this includes replacing the axles on Märklin rolling stock with the Trix DC wheelsets (also known as Hamo wheelsets). These are basically DC versions of the Märklin wheelsets with no additional changes.

And that is the cause:
The Trix DC wheelsets are about 14.1 - 14.2 mm wide. Just like the Märklin wheelsets. This is the reason that they don't derail on the curved turnouts.

All other wheelsets from other manufacturers are about 14.2 - 14.3 mm wide. Most are 14.3 mm wide. That extra 0.1 mm is enough for the problem to occur. I noticed that I could push the coach away from the frog to avoid the problem. This means that there is more than enough wiggle room for the coach to pass without problems.

So how do you fix it?

You could change the width of all your wheelsets to the lesser 14.2 mm, but that is just a pain to do and not really a viable solution.

You could also change the turnout which is far easier to do. So that is what I did.

The turnout has guide rails that guides the wheels to run in the correct direction. If I widen the guide rail just a bit, the thicker guide rail would pull the coach away from the frog and the problem goes away.

So I took a piece of Evergreen styrene strip and cut it into a length that matches the part of the guide rail opposite the frog. I also filed the ends of the strip so they would sit flush against the guide rail allowing the wheels to easily move past the styrene.

Note: You only need to do this on the inner curve. The outer curve is not causing any problems.

Tip! To blend the styrene into the turnout I recommend that you paint it in a similar colour instead of leaving it white as I did in the pictures. 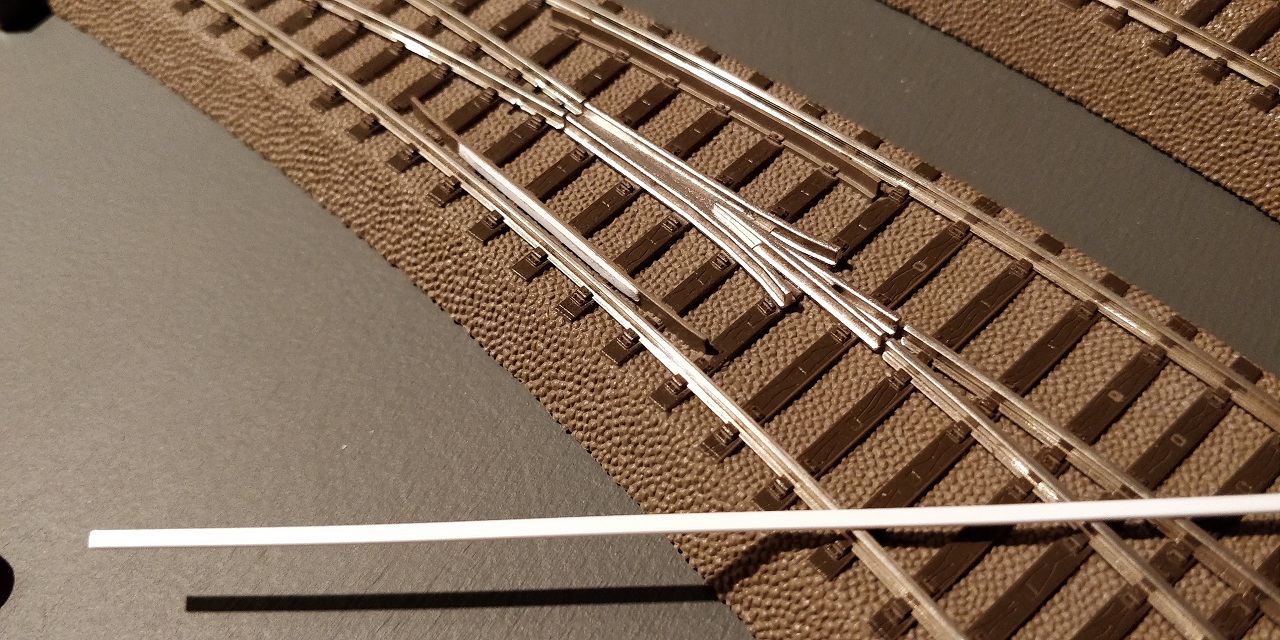 The strip I used is too thick for the fix to work, so I filed it thinner. You could probably go with a thinner strip in the first place, but I did not have any lying around. 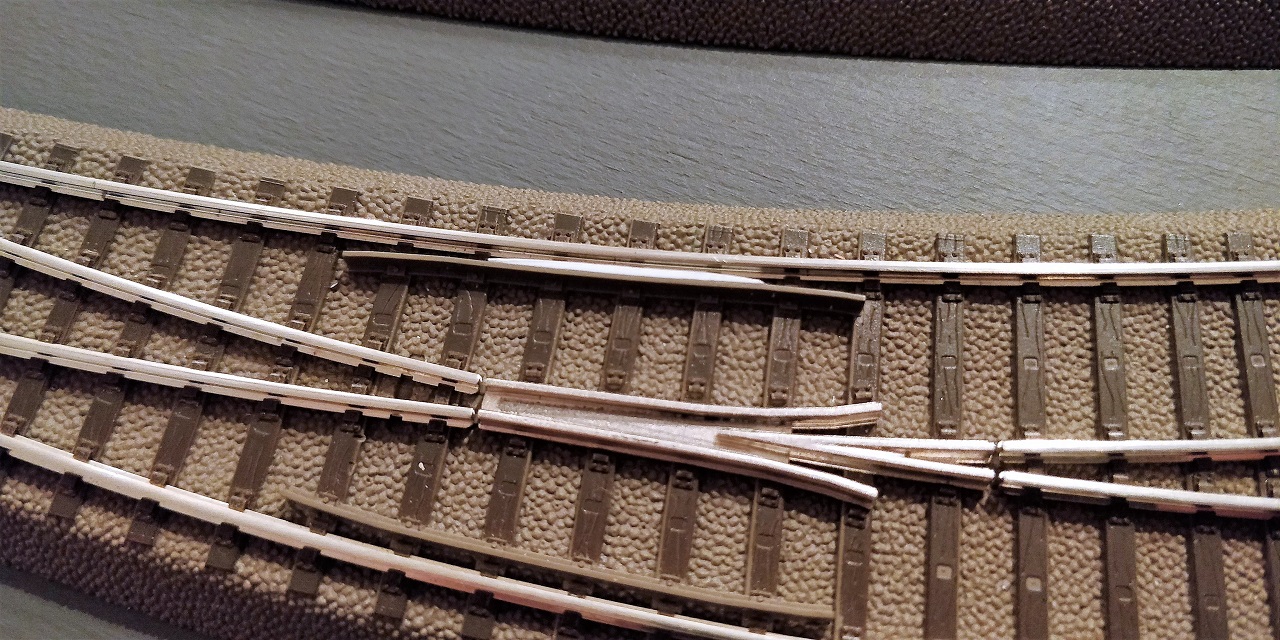 It works perfectly all my coaches now run with ease through the turnout. 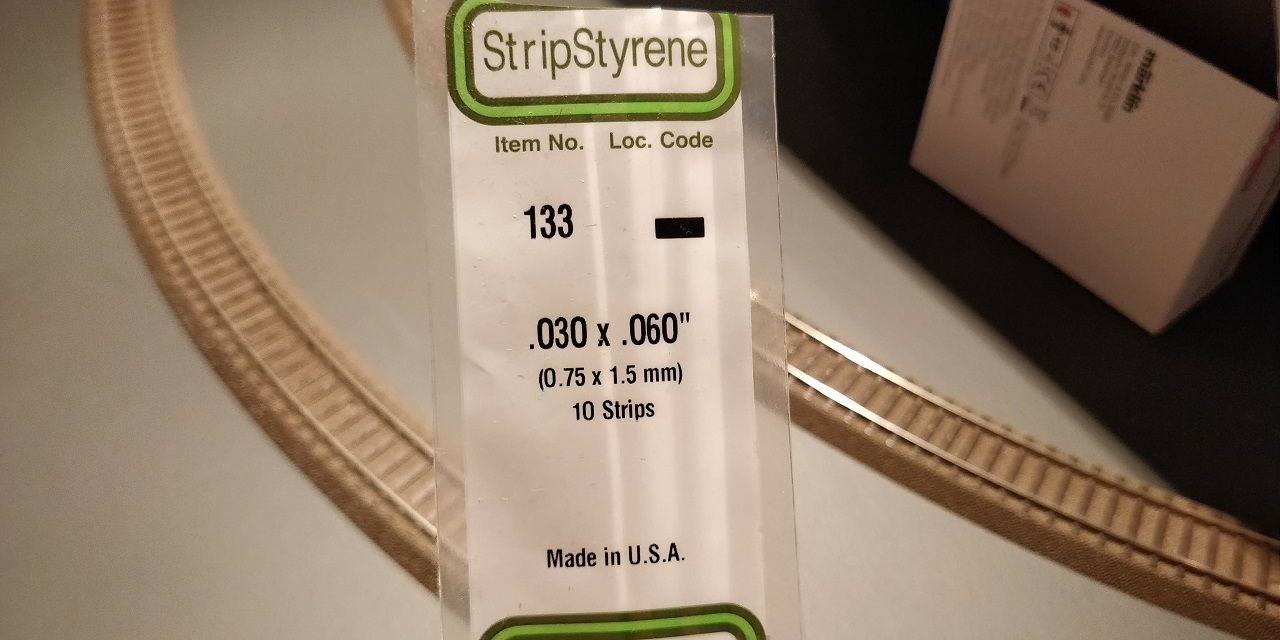 To attach the styrene to the turnout I use my trusty Noch Hin & Weg-Kleber. This has the same behaviour as Woodland Scenics Scenic Accents Glue. The idea is that you can remove the styrene strip if you ever want to replace it or do maintenance. The fix is not permanent, which I personally like. 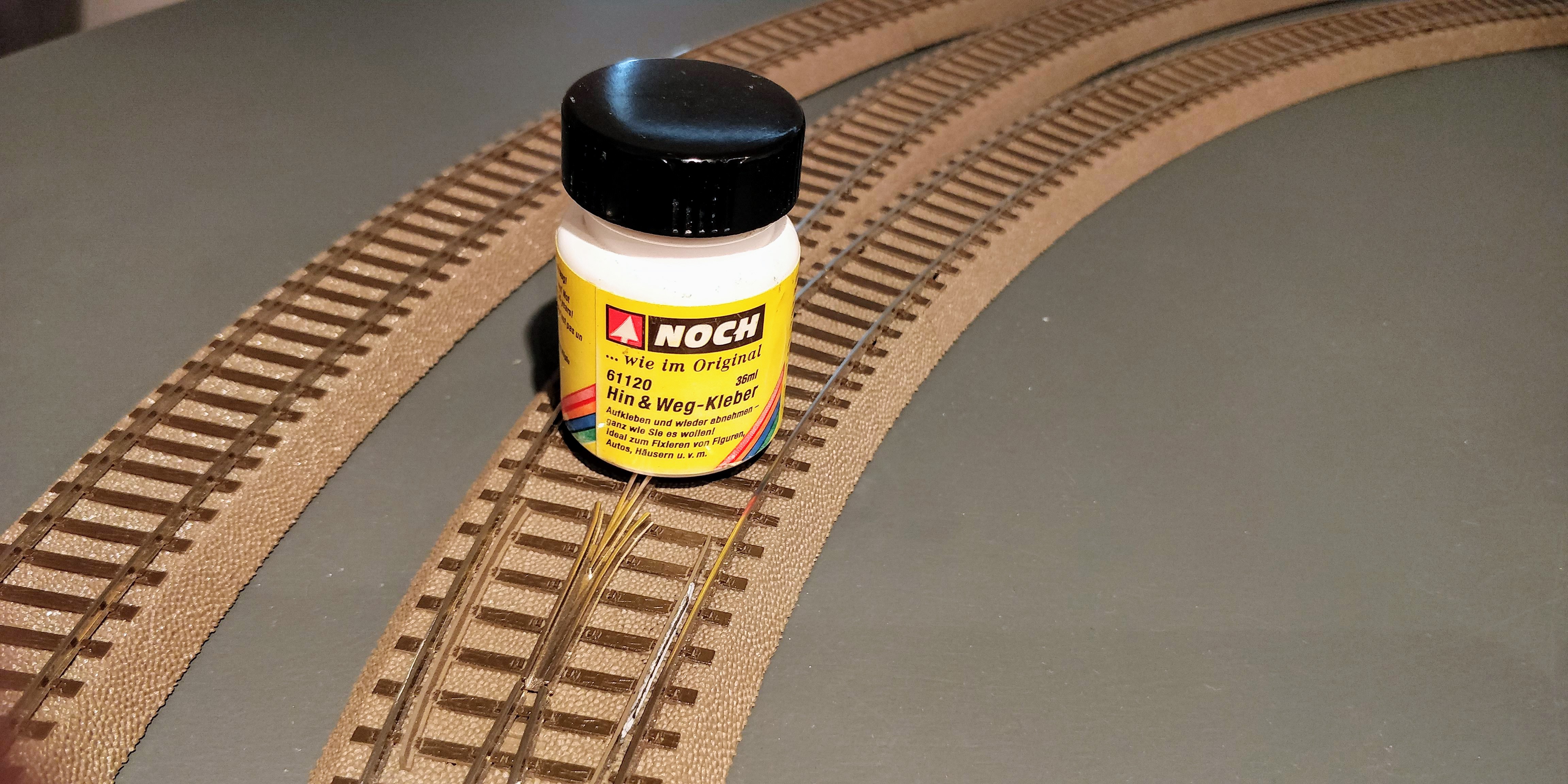 Adding thin plastic strips to the guide rail works and I am happy with my turnouts again. But I don't like having to modify stuff like this. The turnouts are not cheap and they should work with any type of rolling stock without me having to be creative.

As I said: The above fix will work, it is fairly easy to do. If you have problems with the curved turnouts, give this fix a try, I am sure you will be happy with the result.

I have passed my findings on to Trix so they have the option to do something about it, should they wish to do so.

What about the 3-rail version? I have not heard of anybody having problems on the 3-rail larger radius curved turnouts. So I do not know if this is specific to the Trix version. The Märklin version has additional guide rails to prevent the slider from short circuiting the layout. These additional guide rails might correct the problem as a side effect. My recommendation is to only perform the fix if you experience problems and you can identify the cause of being the above mentioned.