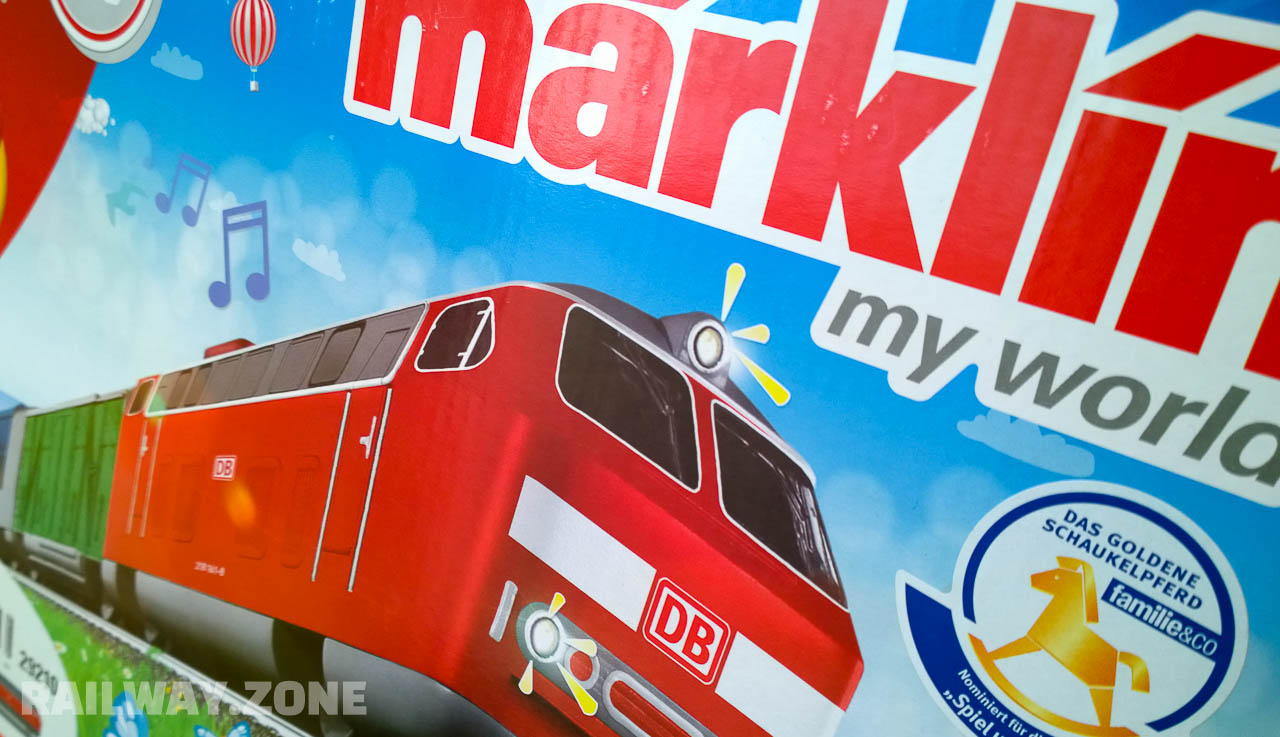 We all know how small children are thrilled by playing with model trains and how they want the trains to go faster, and faster and perhaps even crash and so on.

I bet you also know the feeling when your own precious models are at risk of being played with by children. This is why I bought a train set from the Märklin My World range of products. A great way to entertain the kids and keep your own models safe from the damages that small hands can do!

The Märklin My World product range is directed at children from the age of 3 and around 7 years old. The products have attractive prices and the models are robust and able to take som beating. This set costed me around 60 euros (USD 68, DKK 450). 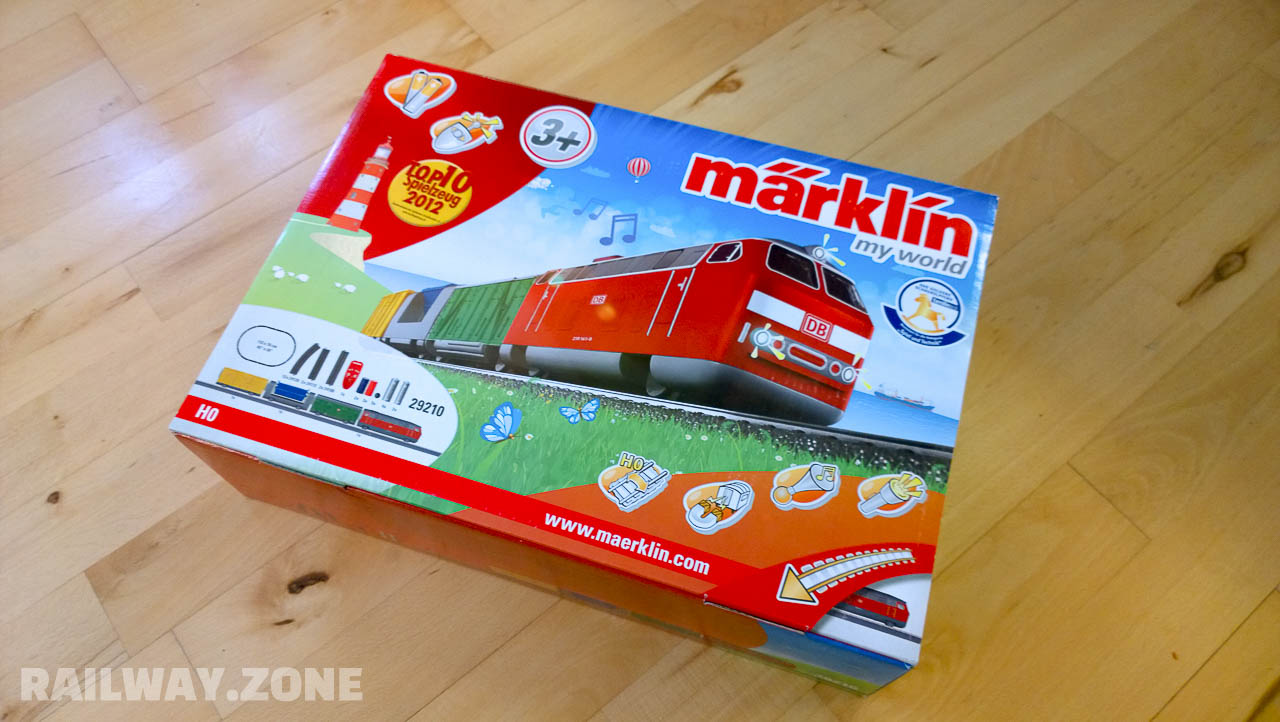 The boxes are colourful and inspiring. You can open the lid and have a look inside, much like on boxes from LEGO and other toys. There are easy to use instructions in the lid to get you started immediately. 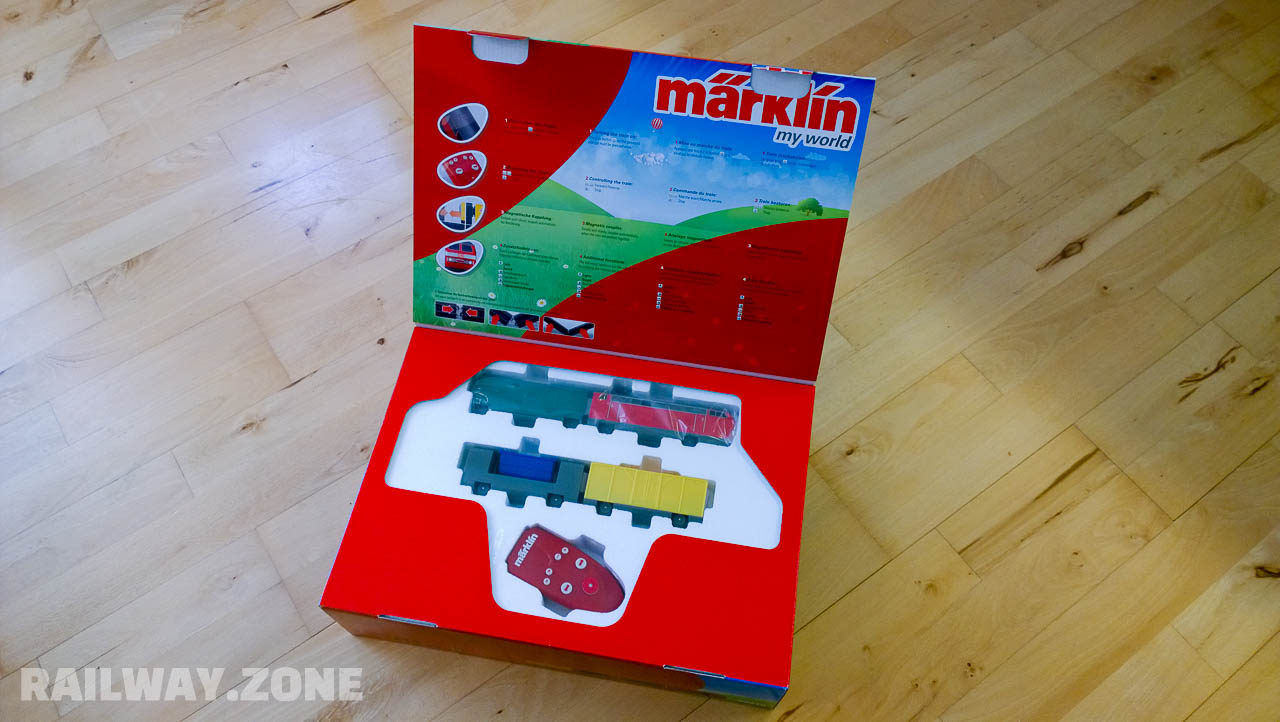 The package contains the locomotive, a battery wagon, two goods wagons, a remote control, some goods and track. 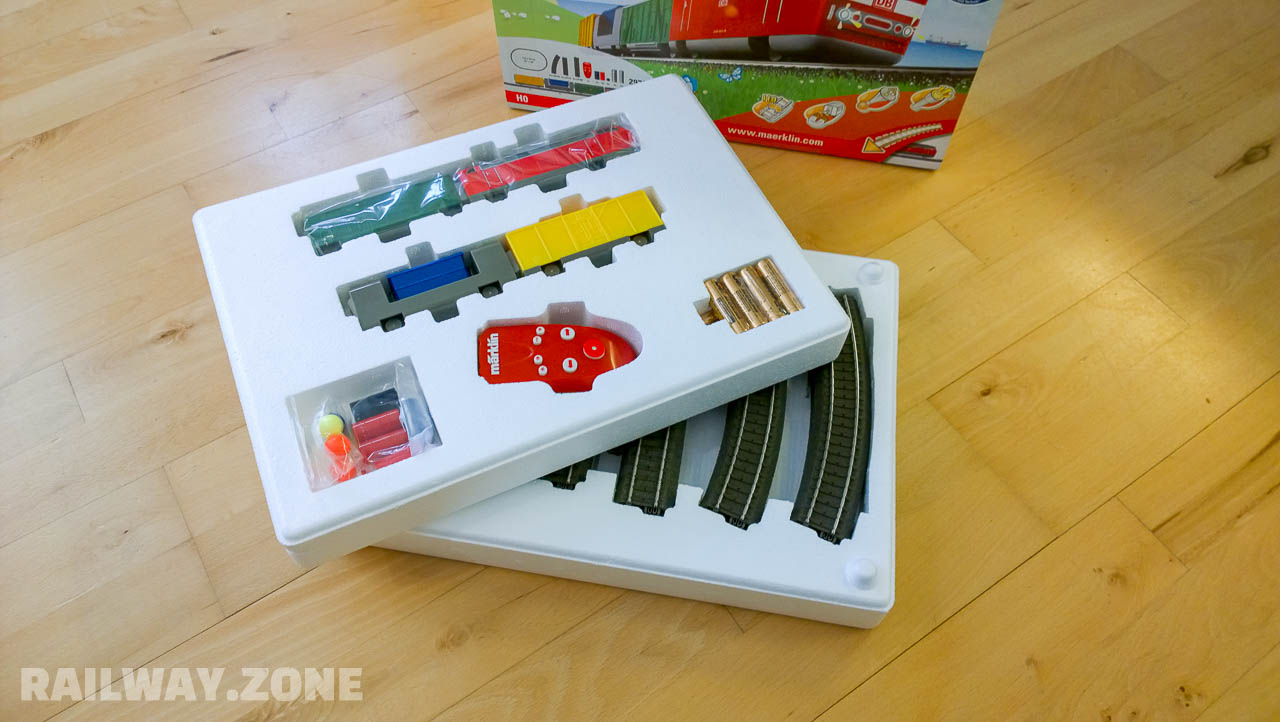 The content is placed in two drawers that easily comes out of the box. It is easy for even a kid to pick up and get started.

The train is a model of a German freight train. The wagons are of course a long way from their prototypes, and so is the locomotive, but to a kid that does not matter at all. My first train had no prototype as well, and I never cared. The locomotive is inspired by a class 218, which is a well known German mainline diesel.

The locomotive has LED headlights and comes with a basic sound chip. Using the remote control, Junior can activate the lights and sounds. 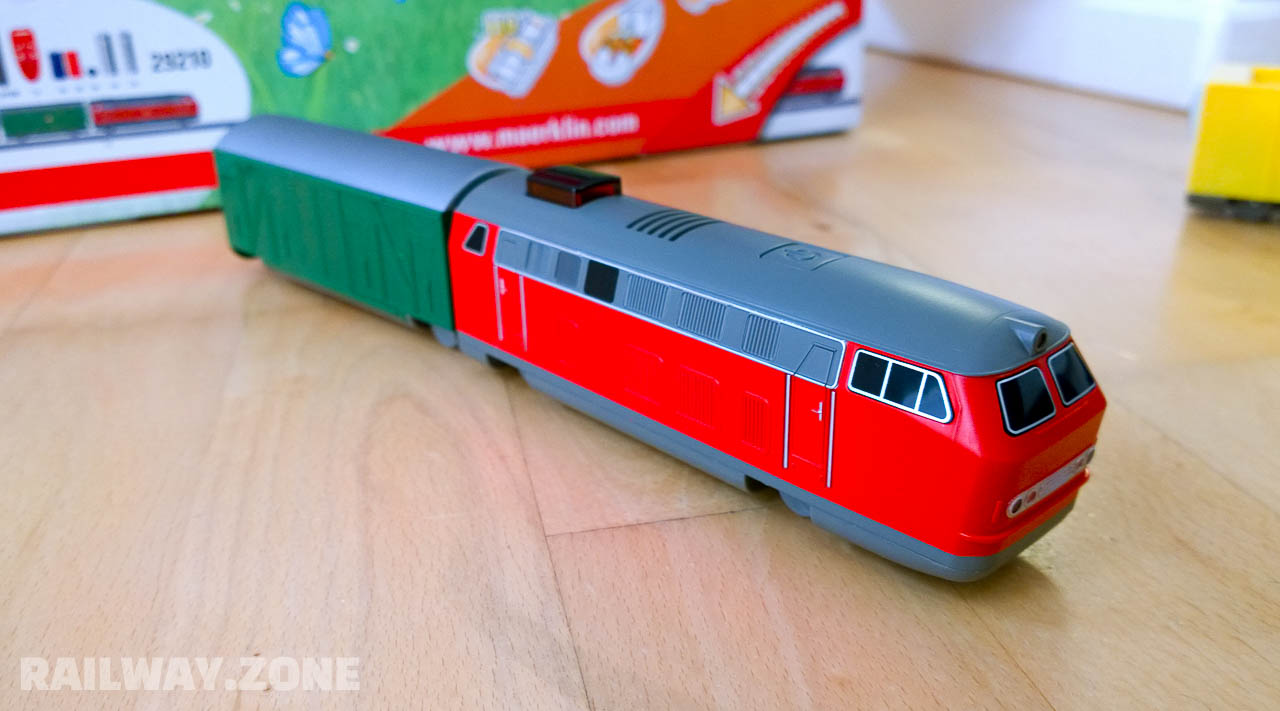 Tip: The locomotive has plastic wheels. This allows for dad and Junior to run the locomotive on dad's layout without having to worry if dad's model railway is a 3-rail system or 2-rail system. It will work regardless (for an explanation of the 3-rail- and 2-rail system, check below the article).

Included are also two goods wagons, and some goods to put in them. The blue hopper can tilt its container to unload the goods inside. You can buy additional accessories such as a crane to load goods into the wagons. There is a product catalogue included in the box for inspiration. 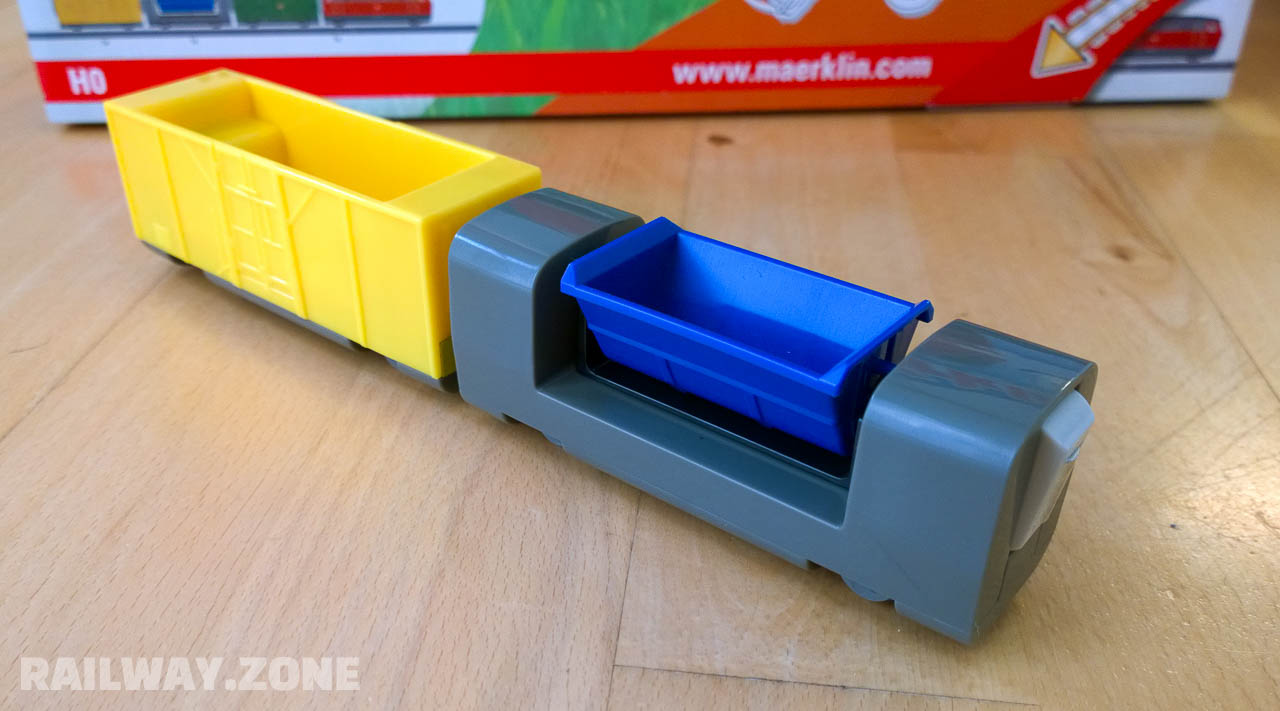 The goods in the package is some barrels and coloured balls. You can also buy other types of goods when Junior gets bored with the included ones. The stickers are for decorating the locomotive - a fun project to do together with Junior. 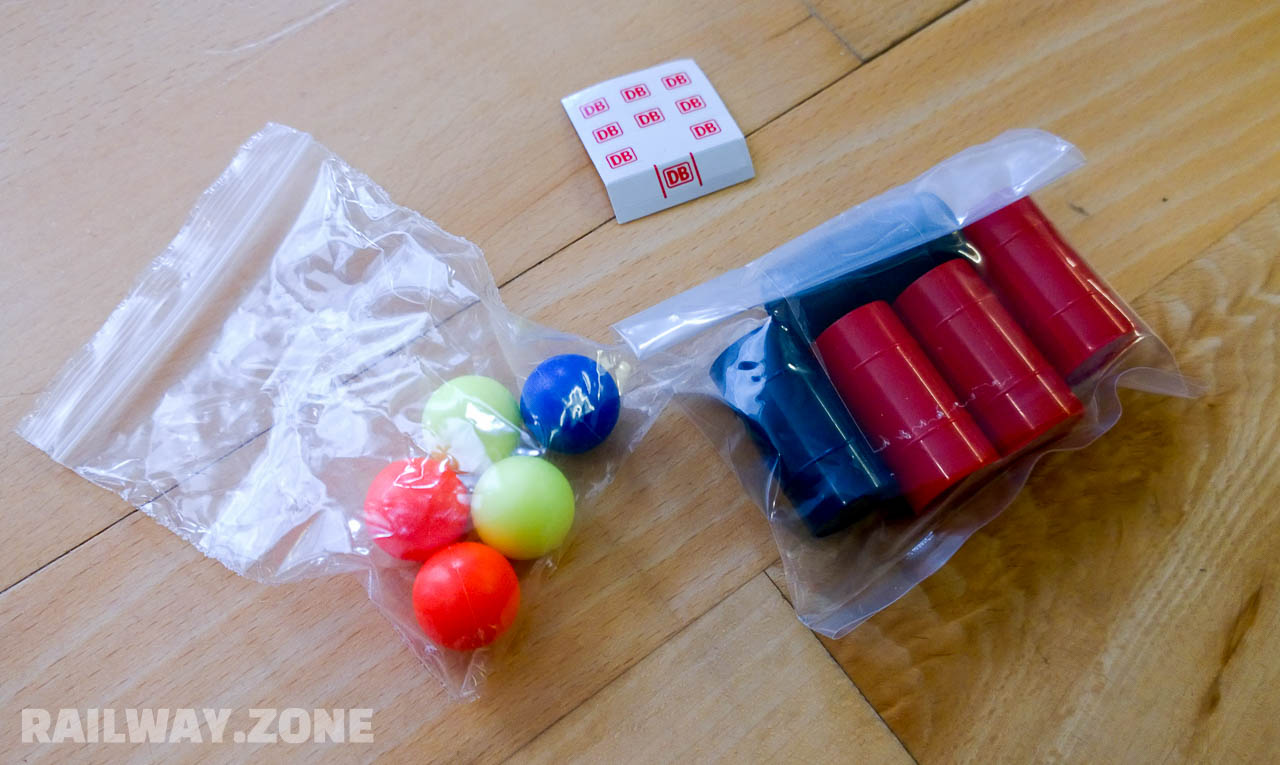 The remote control has buttons for activating the sound and lighting. You can choose the direction of the train and clicking the direction button repeatedly will accelerate the train. There are three speed steps to choose from. The giant red button is an emergency stop. 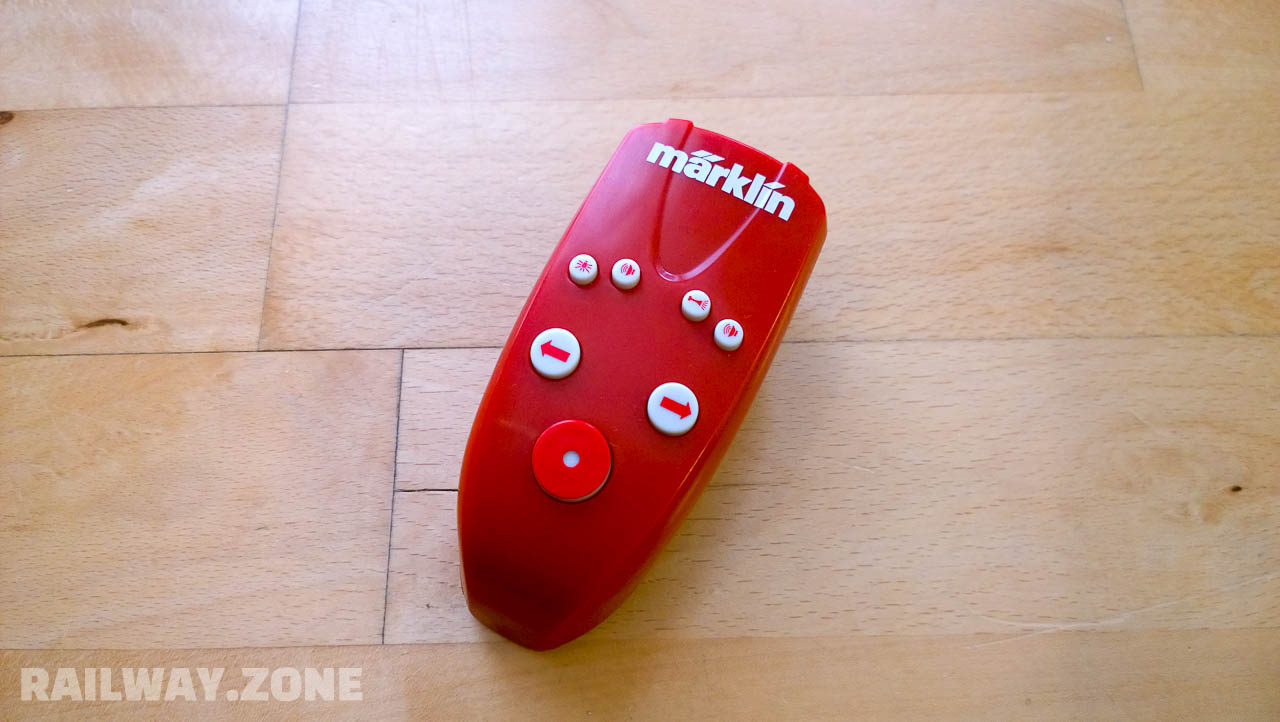 The remote control can control two locomotives using a channel selector. There is a similar switch on the locomotive. 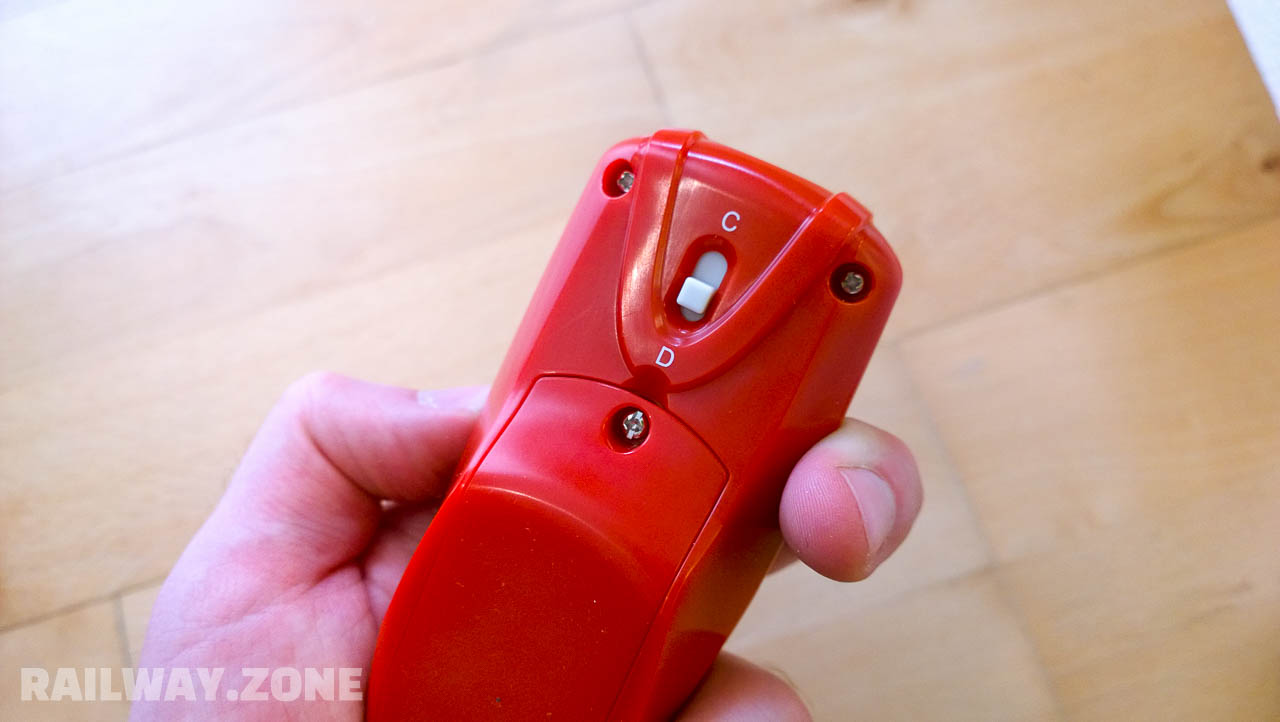 Batteries come included, so Junior can be running trains within minutes. Batteries are included for the train and for the remote control.

The battery wagon is permanently connected to the locomotive. You install the batteries by removing two screws in the bottom and pulling out the battery container. The train requires four AA batteries. The remote control requires two AAA batteries. 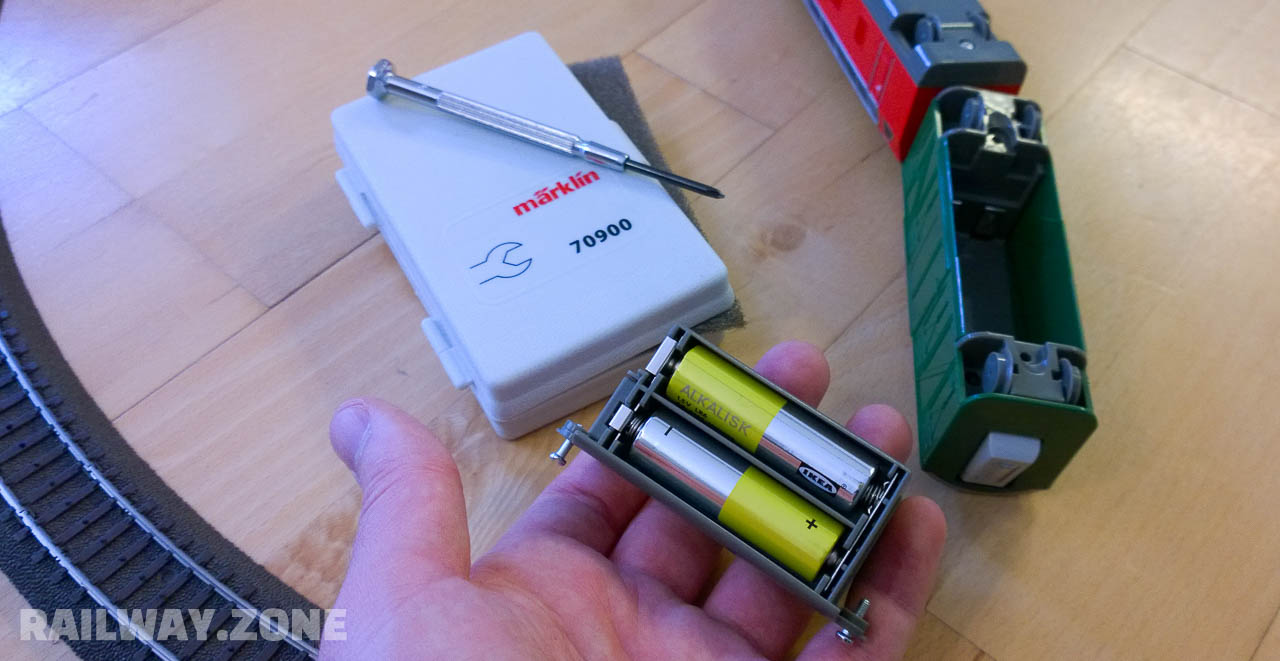 The train uses the same track as any H0 train! Meaning that Junior can expand the layout by buying additional standard track or perhaps even borrow track from dad. 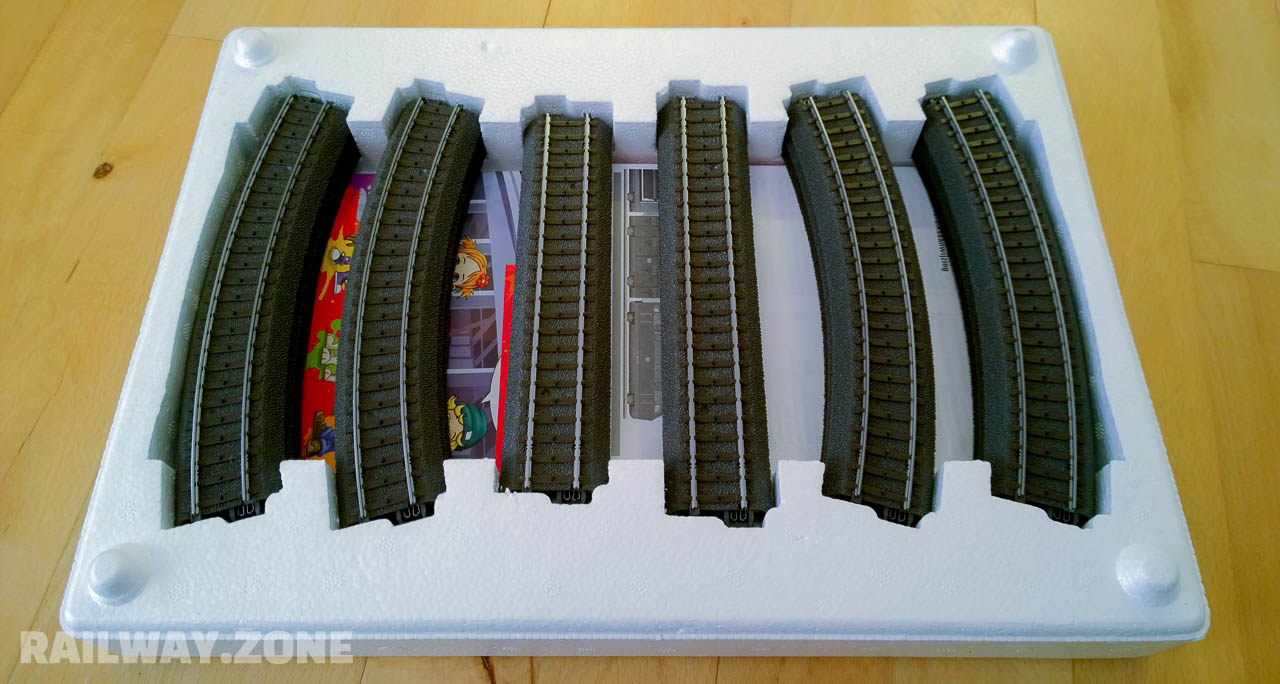 The track included is Märklin's C track, which is a robust and easy to use track. You connect the track by "clicking" the pieces together (hence the C - click!). The included track is for the 3-rail system, but C track is also available for the 2-rail system from Trix. Additionally, the Märklin My World product range also includes an all-plastic version of the C track which is cheaper than standard C track.

Tip: Since the track in this package is standard C track, when Junior gets older, he can expand his model railway to include products from the other Märklin product ranges. The product will work seamlessly with the My World products. He can also choose to expand his layout using Trix C track if he wants to enter the world of the 2-rail system. The possibilities are endless.

When the layout is set up, it is time to run the trains! You turn on the locomotive by clicking the on/off button on the roof. Choose a direction and off the train goes. 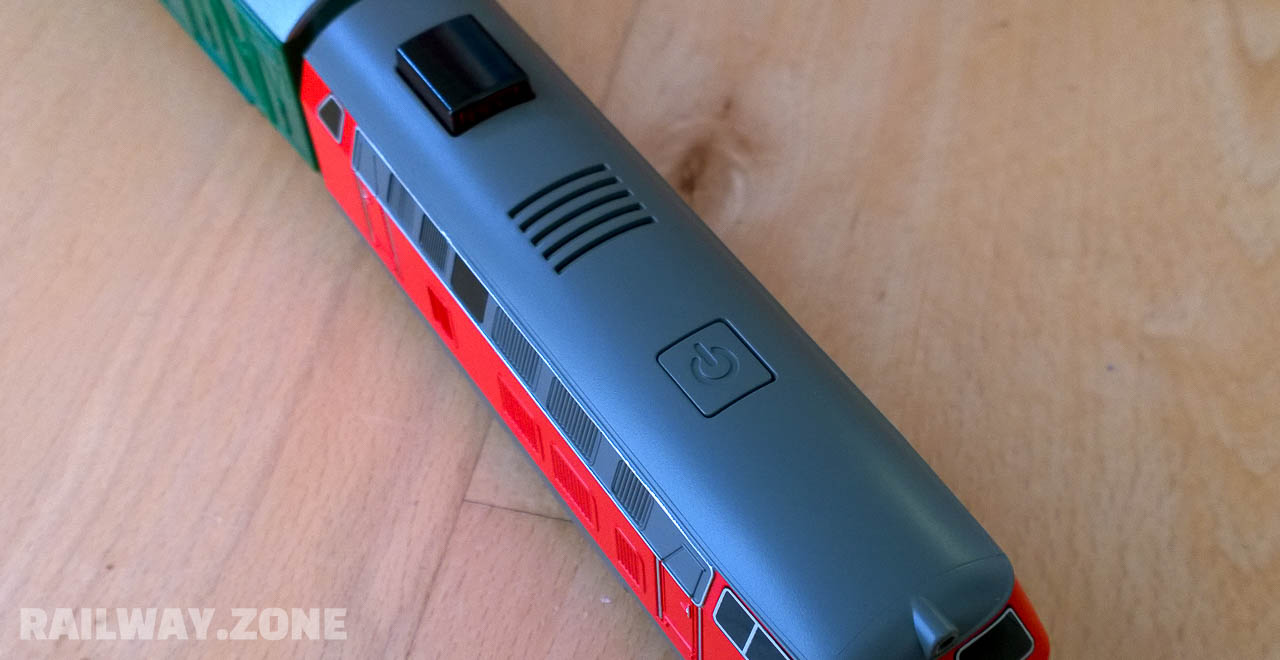 Also In The Package

There are additional things in the package, that might be of interest. First of all a manual that explains in detail how to set things up and how to take care of the models. 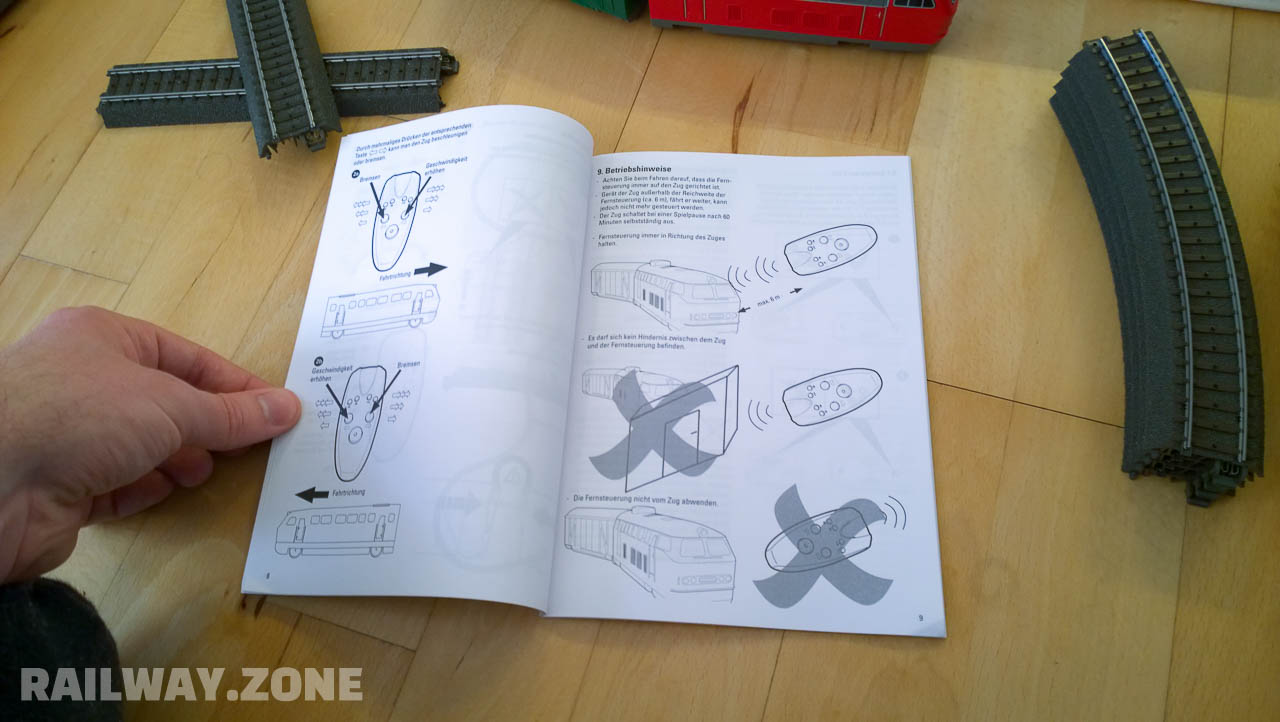 Additionally a paint book is included. The paint book contains tips and ideas for building and expanding the model railway. It also gives you an overview of the currently available products. 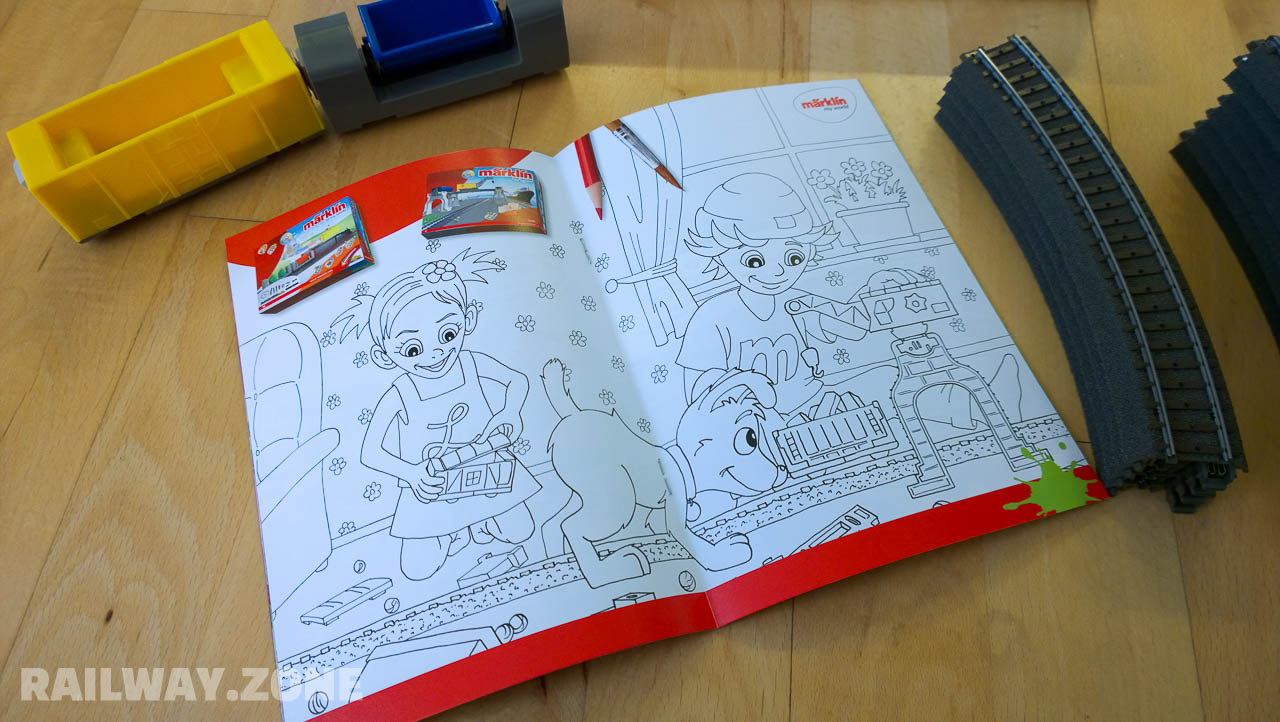 The Märklin Minis Club is the Märklin club for children. A registration form is included and membership is free. Four times per year, they will send you more paint books and stuff that Junior can use as inspiration. 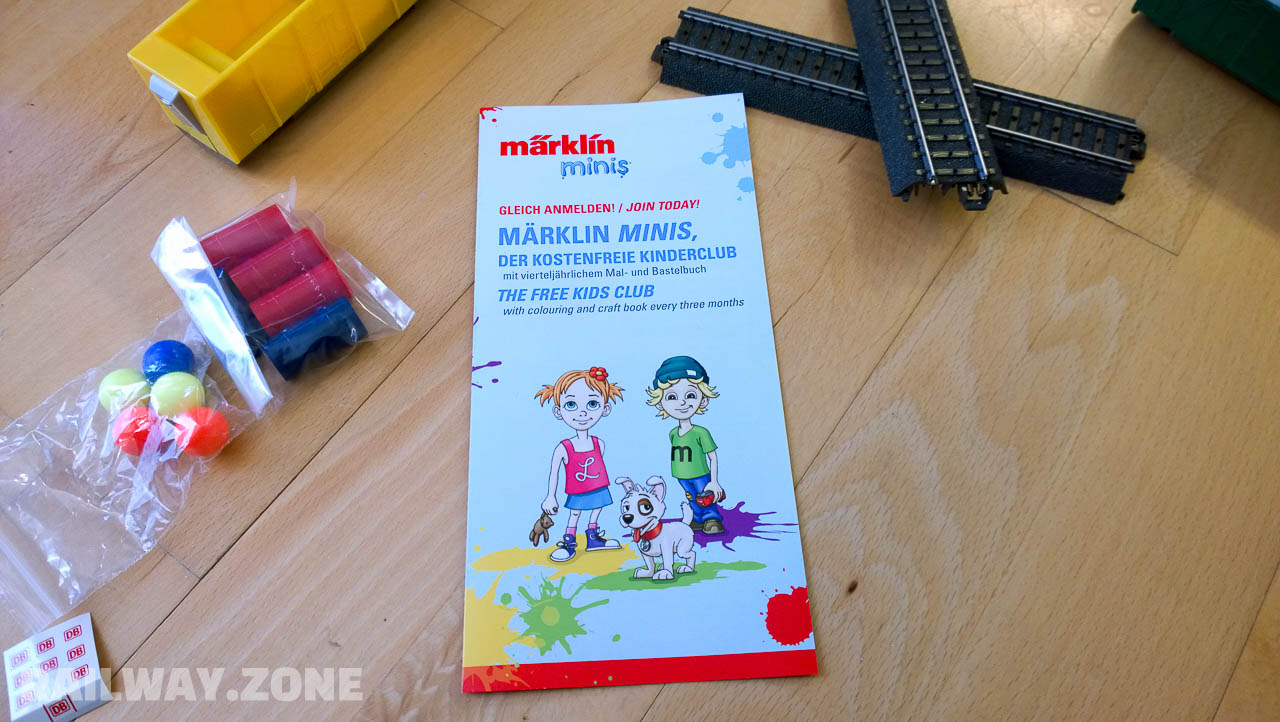 Here is a video of the train and functions in action.

The Märklin My World products are great toys for starting with the world of model railway. The world's greatest hobby - that will last you a lifetime. When my dad brought home my first train set for christmas, he probably did not know what he started. Any kid should have this opportunity, and with the Märklin My World products every kid can. The products are cheap and robust, and can take serious beating form being played with.
There are lots of accessories that come in all price ranges, so grandma and grandpa, big brother or sister, can help expanding Junior's model railway with both small and - hopefully - bigger birthday presents.
If you have small kids around what wants to play with your model railway, and your are not too happy about them being in the train room, I think you should give Märklin My World a try, I am sure you will have many hours of fun and enjoyment.
Just remember, to let the kids play with the trains as well... ;-)
Happy modelling!
Information about 3-rail system and 2-rail system. What's the deal?

If you are confused about 2-rail and 3-rail, here is a quick explanation. On 2-rail, the two rails distributes the power. 3-rail means that the power is distributed by a center rail in the middle of the track. The 3-rail locomotive picks up the power through a slider underneath the locomotive. 3-rail is often refered to as the AC-system, and 2-rail is refered to as the DC-system.

This is not something to worry about with the Märklin MyWorld train, as it runs on batteries. But it will have a say in the future of Junior's model railway, when he starts to play with real electric trains. When choosing system, you are basically choosing a path.

3-rail locomotives, will not run on 2-rail track and vice versa. This only goes for the locomotive. The wagons can have their wheelset exchanged and can thus be used on both systems. Märklin offers to exchange the wheelsets for free when you by a wagon.

2-rail is more widely used, and 2-rail track is manufactured by several companies. Märklin offers their C track as a 2-rail version from Trix. Märklin also offers lot of their locomotives as 2-rail models through Trix.

I personally run 2-rail with the Trix C track as my main track, and I have collected a lot of Märklin goods wagons as well as Trix locomotives over the years.

If some of Junior's friends have a model railway, it might be a good idea to choose the same system (3-rail or 2-rail) so Junior and friends can play together when the trains starts to become real electric trains. Running trains with your friends is a rewarding experience, that should not be underestimated.