The PIKO A-track has seen more love in the later years. Last year PIKO introduced a concrete sleeper version of the track to suit the modern era modellers. This was a welcome change as most track today only has wooden sleepers. The special thing about the PIKO track was the inclusion of a pair of turnouts with concrete sleepers.

Turnouts with concrete sleepers are not that common, but they do exist and they are becoming more common in the recent years. Most of them on high speed lines, but they can also be found elsewhere.

This article is a review of the PIKO concrete sleeper turnouts. 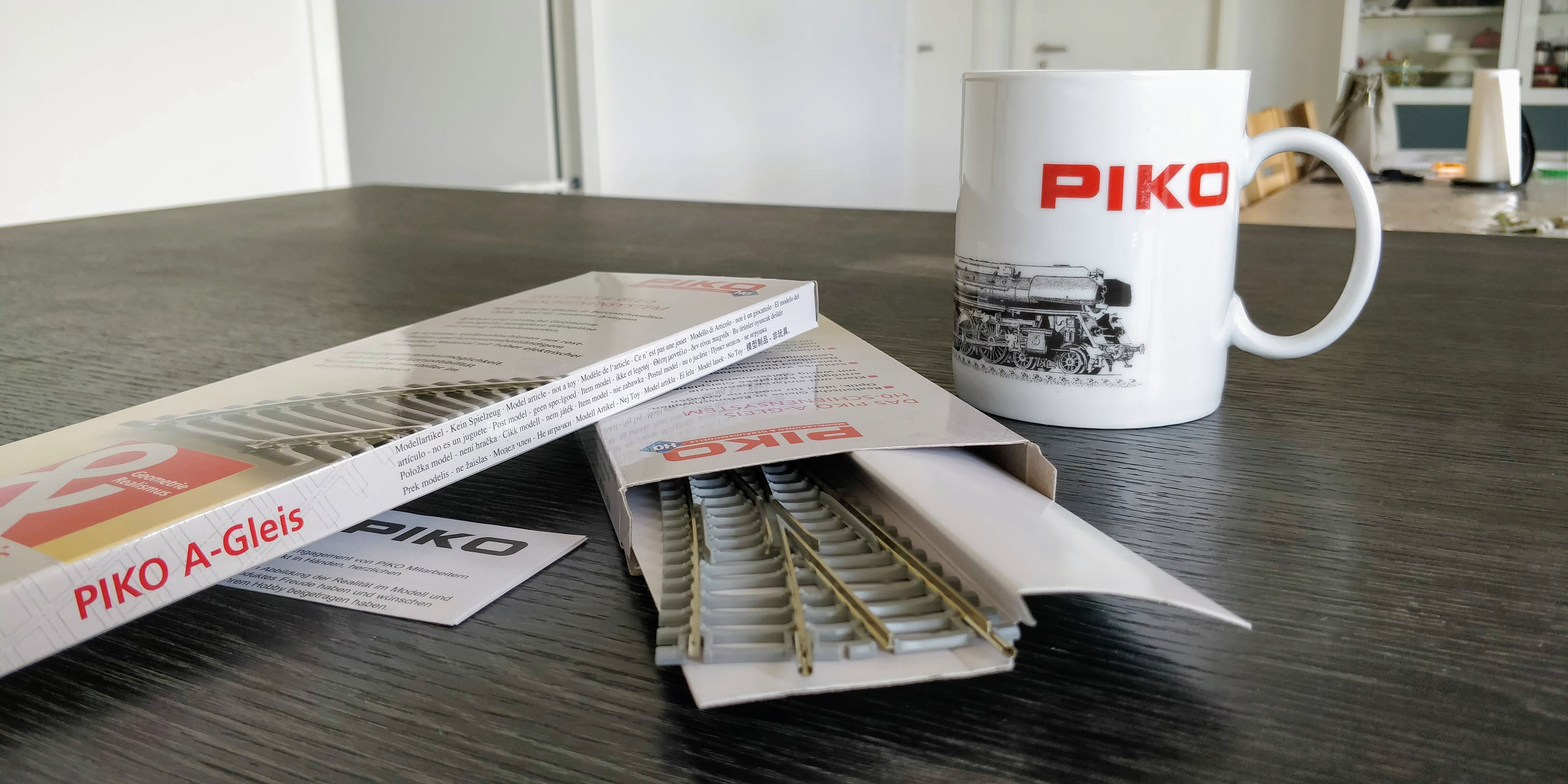 There is not much to say about the packaging. The turnouts comes in the well known PIKO A-track box with a picture on the front and a little inlay thanking you for buying the product. The package is sturdy and protects the track during transport. 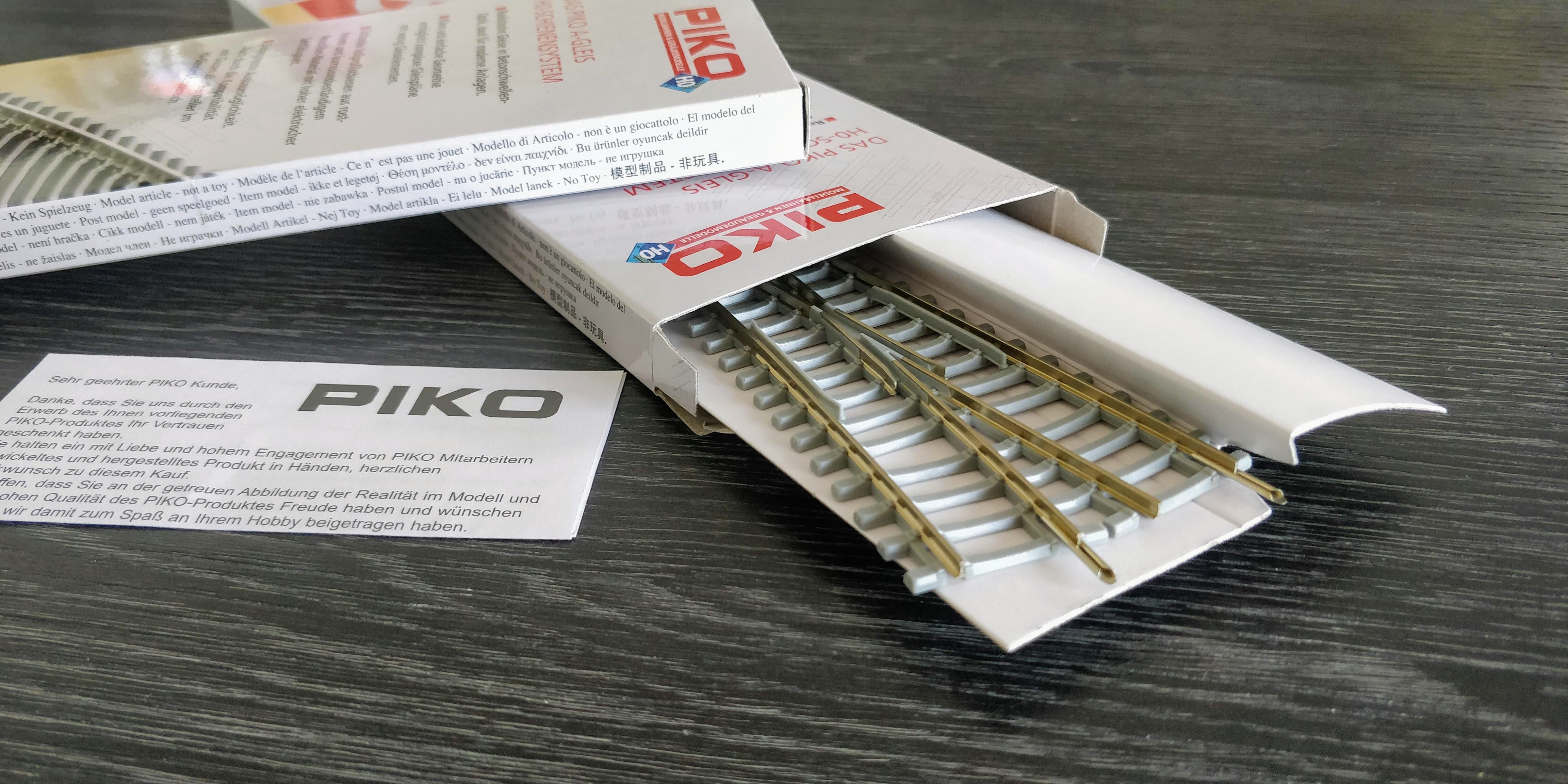 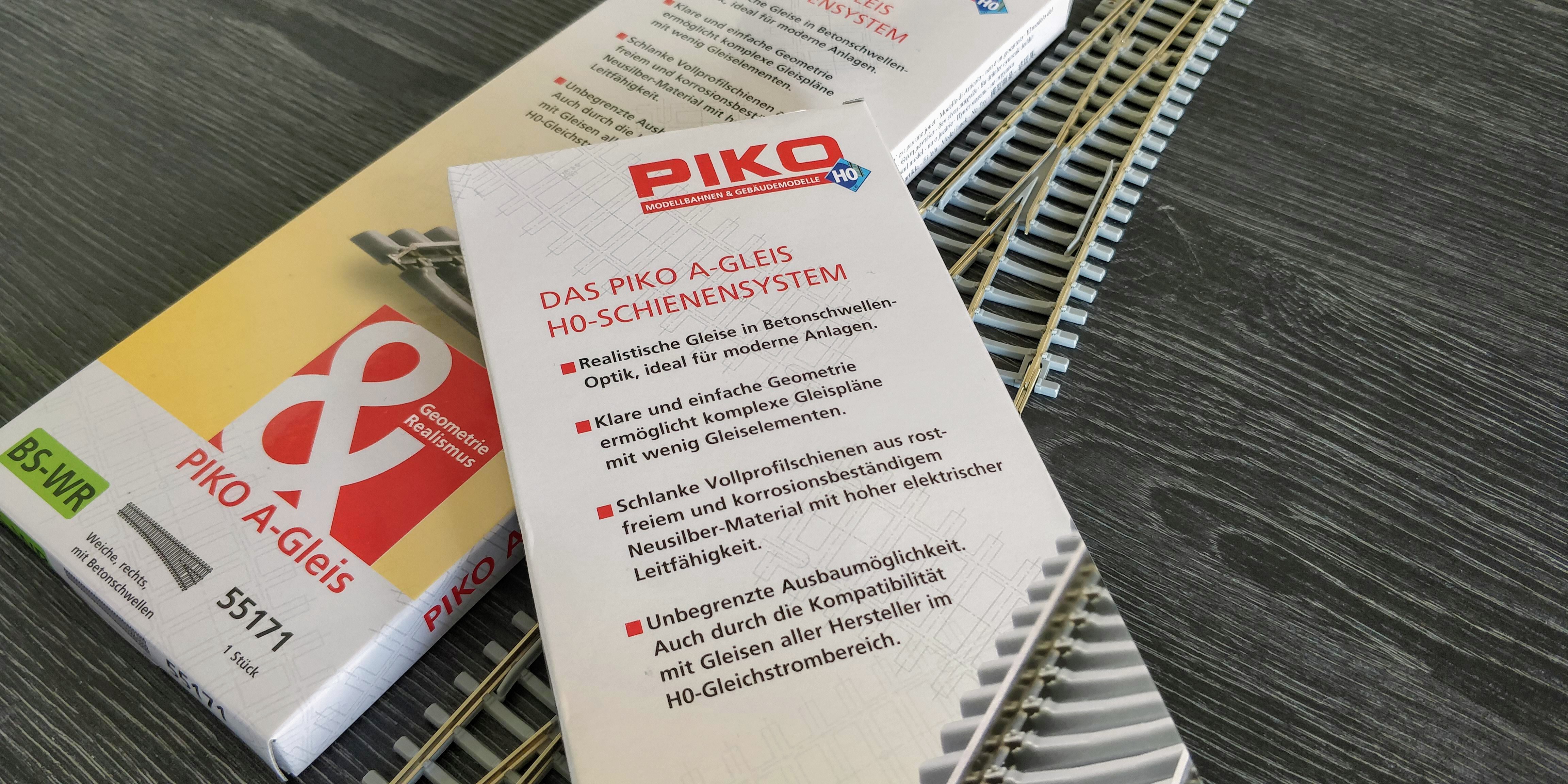 The turnout itself is a concrete version of the wooden counterpart. Just as you would expect. All the features are the same, all the technology used is the same. This is very good as you don't have to buy special things to make this turnout fit into an existing layout. It is important to point out that the sleepers are completely new tooling. This is not a wooden version painted gray. It looks like real concrete sleepers with all the details that they have. 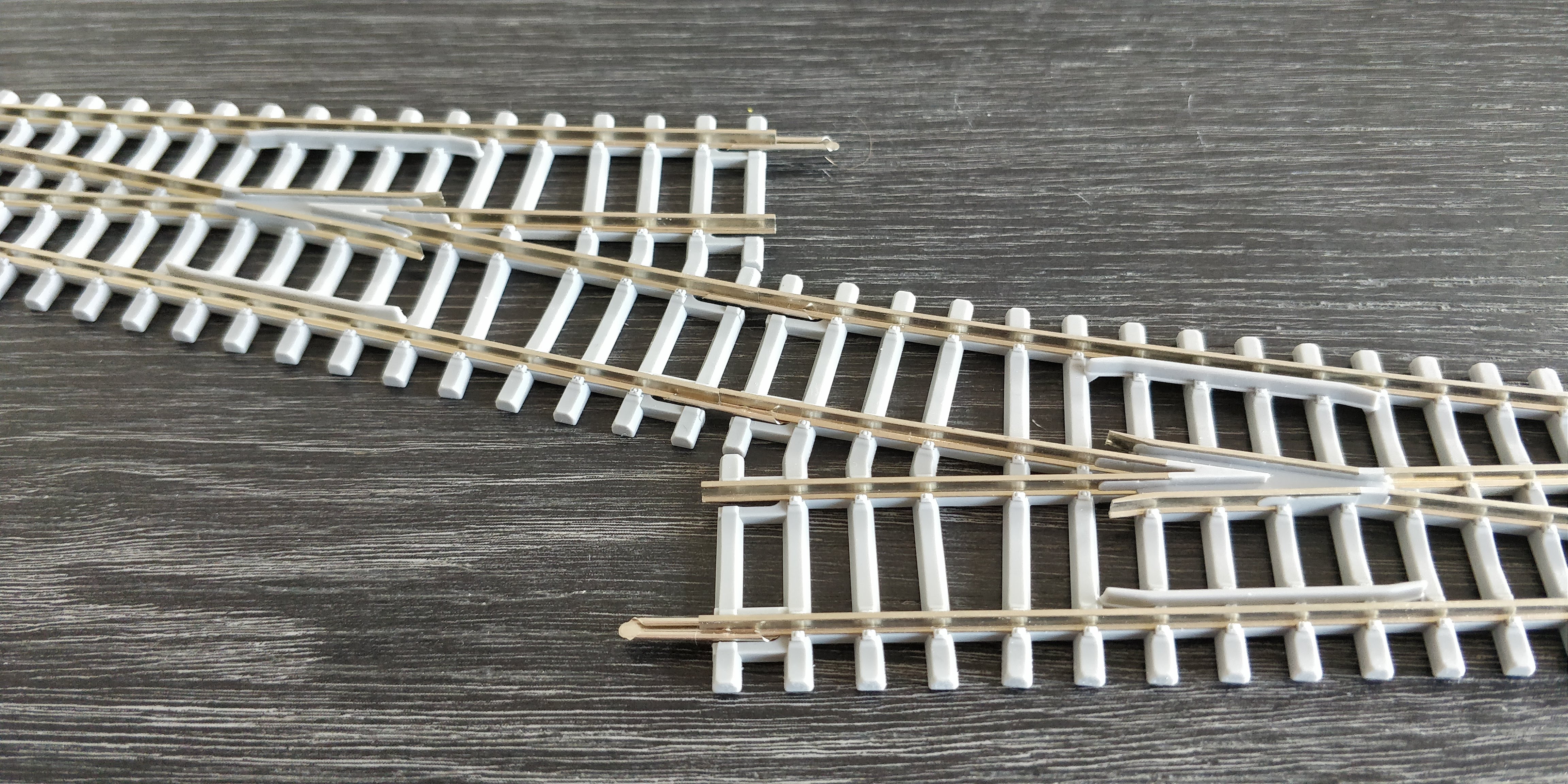 Just like the wooden version you can attach a solenoid drive to the side of the track or use the PIKO servo motor and decoder for "under the table" operation. You can of course also use other motors like the Tortoise or similar. 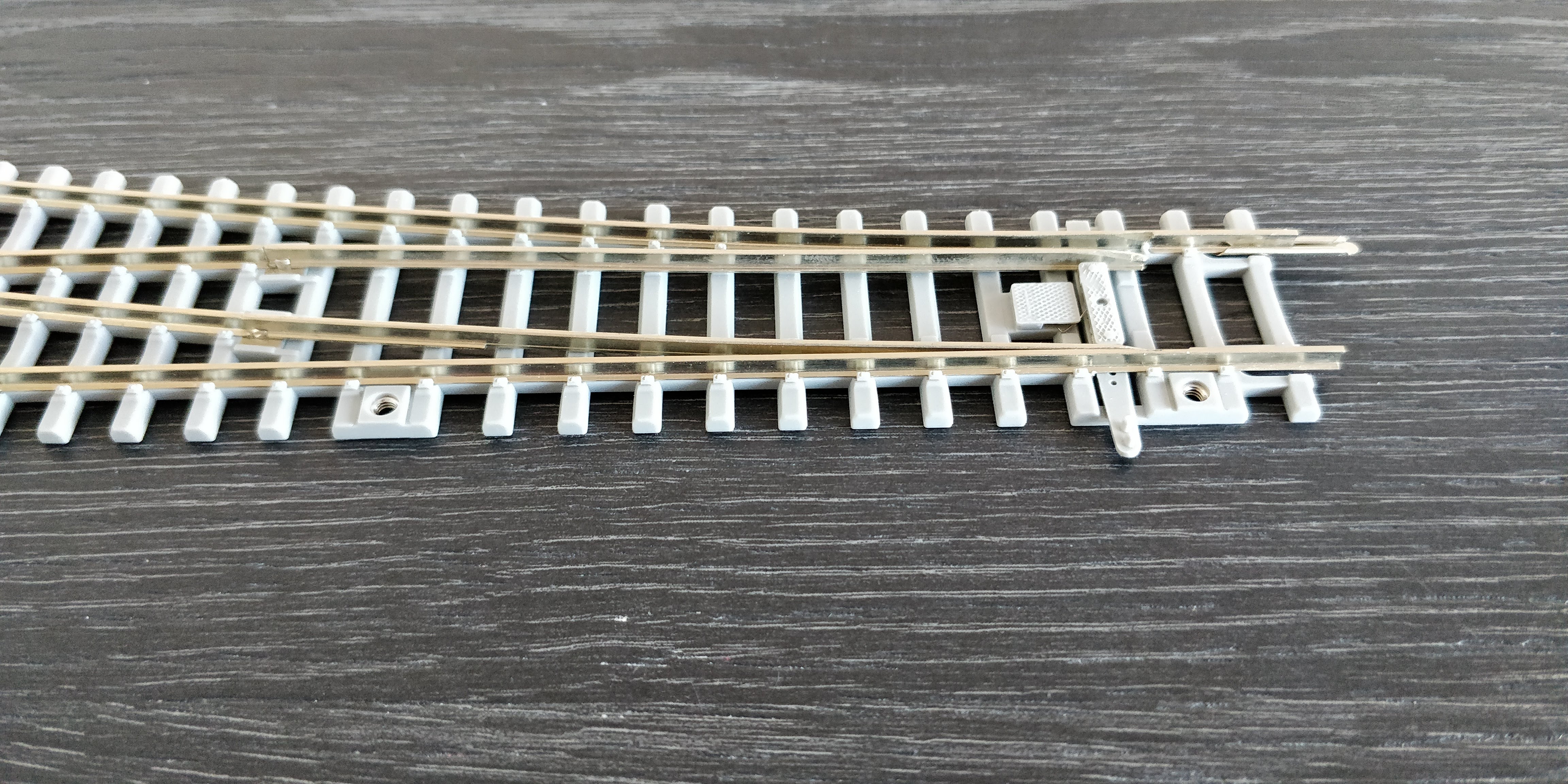 The turnout holds its position, so you don't have to actually power it before use. It can be operated by hand out of the box. Simply flip the turnout with your finger to change the direction. 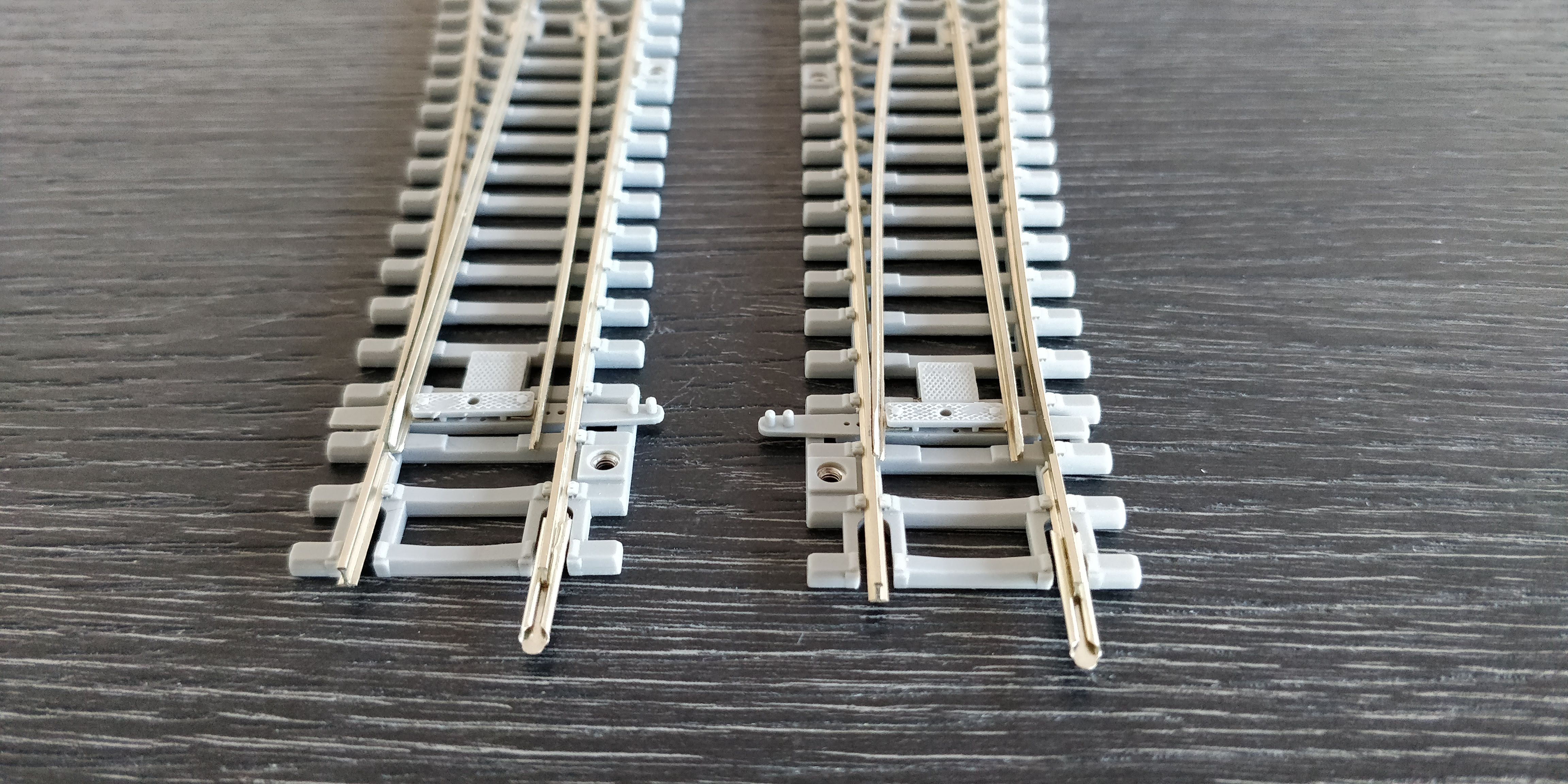 As with all PIKO turnouts the frog is not powered and you cannot power it. This is great if you don't want to mess around with powering a frog and an unpowered frog is usually not a problem on the PIKO turnouts because the frog is short. This means that even the smallest locomotives will be able to travel through the turnout without problems. A great advantage and great for beginners. 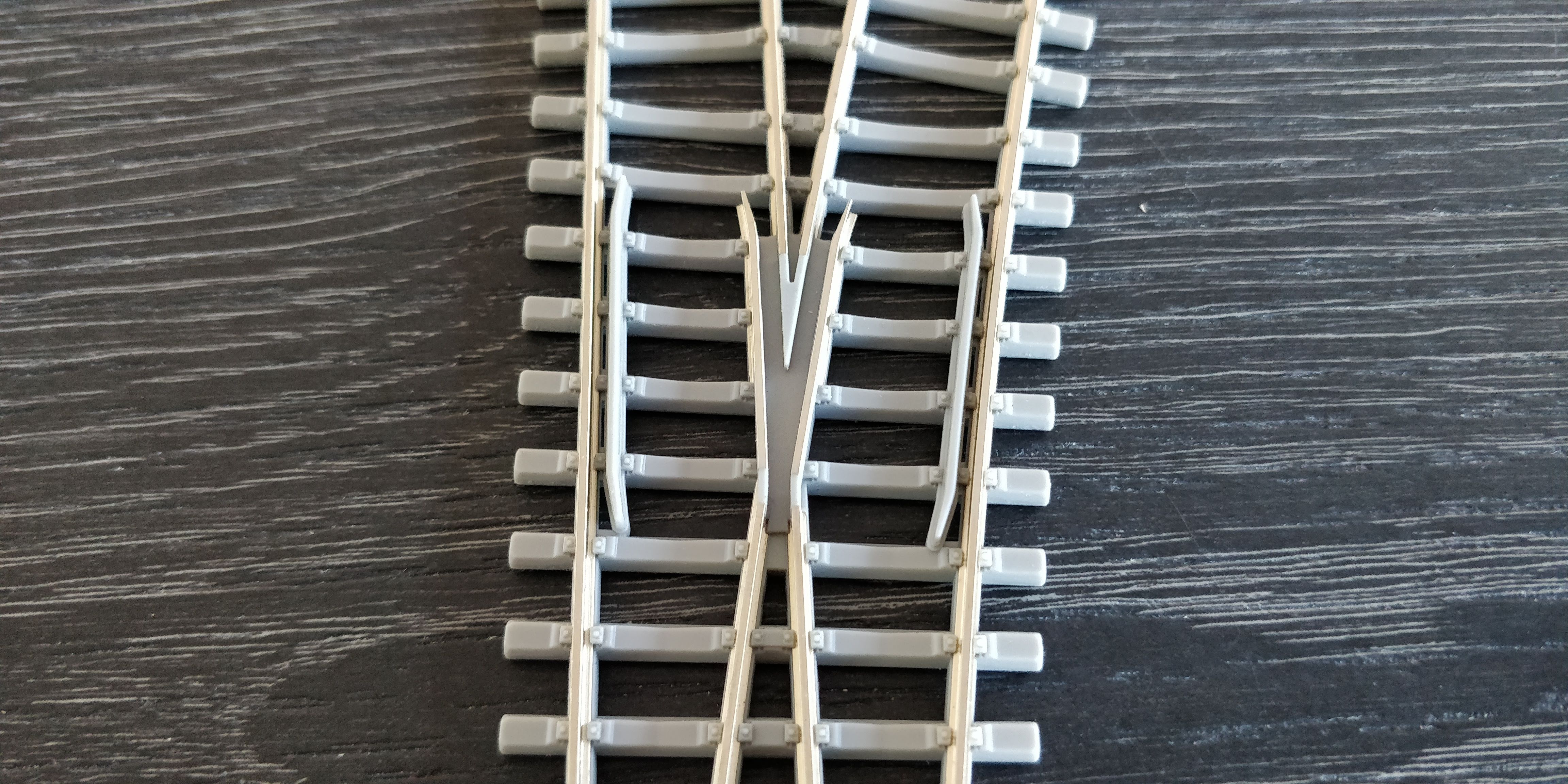 The tongues are of the new type where a real rail is used instead of the older version with bend metal. The rail is attached to the turnout using a hinge. It feels very robust and a lot better than the ealier versions.

Note: The wooden version has got the same treatment, so you should not encounter the older design anymore. Only the crossing and 3-way turnout still has the old design. It may change in the future. 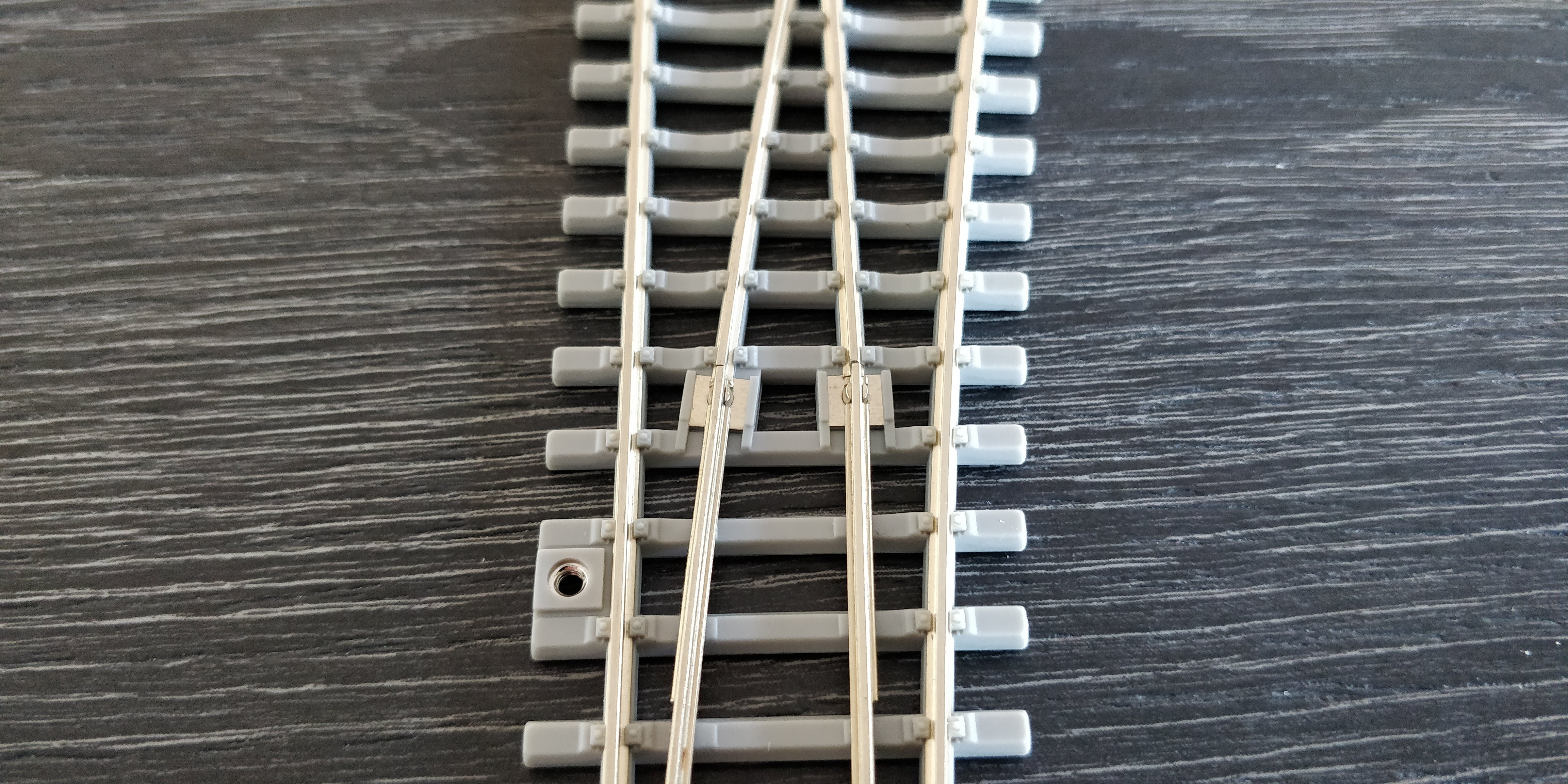 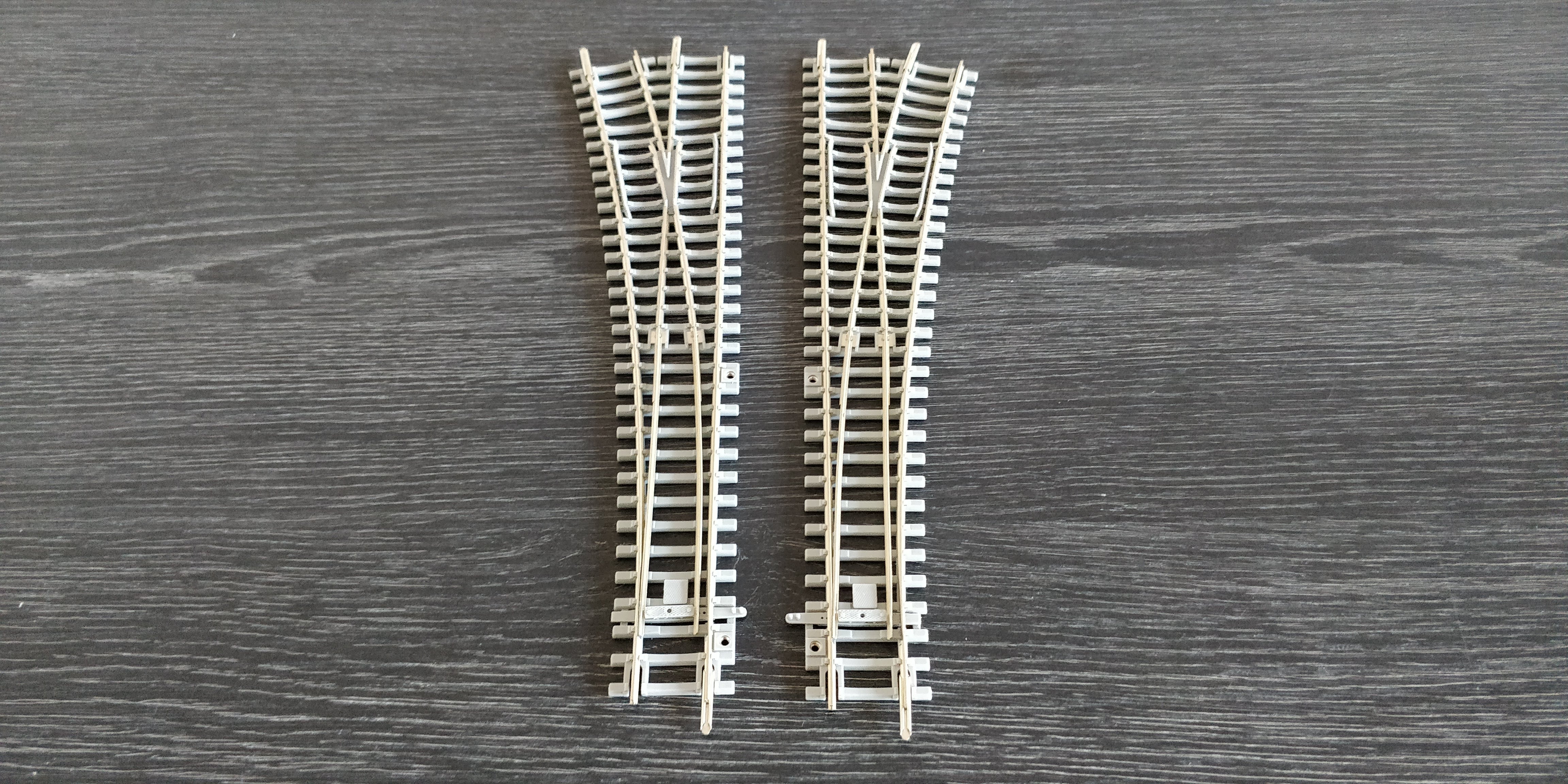 If you flip the turnout upside down you can see that the power is directed to the center rails by bridges underneath. This is great for operational stability and saves you some headaches having to mount this yourself. The two round pieces are the bottom of the hinges mentioned before. 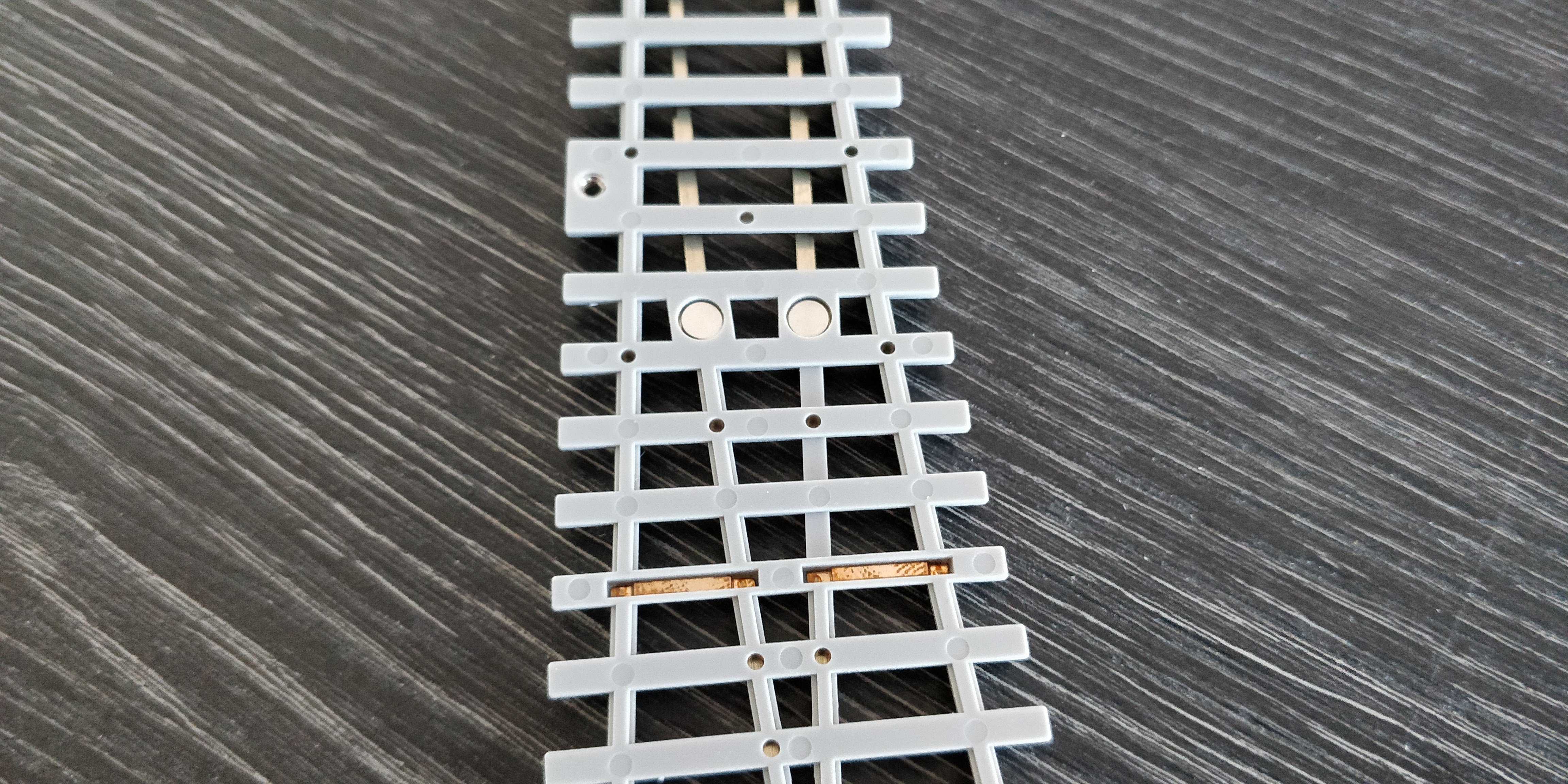 The product number and manufacturer logo is embossed into the sleepers. 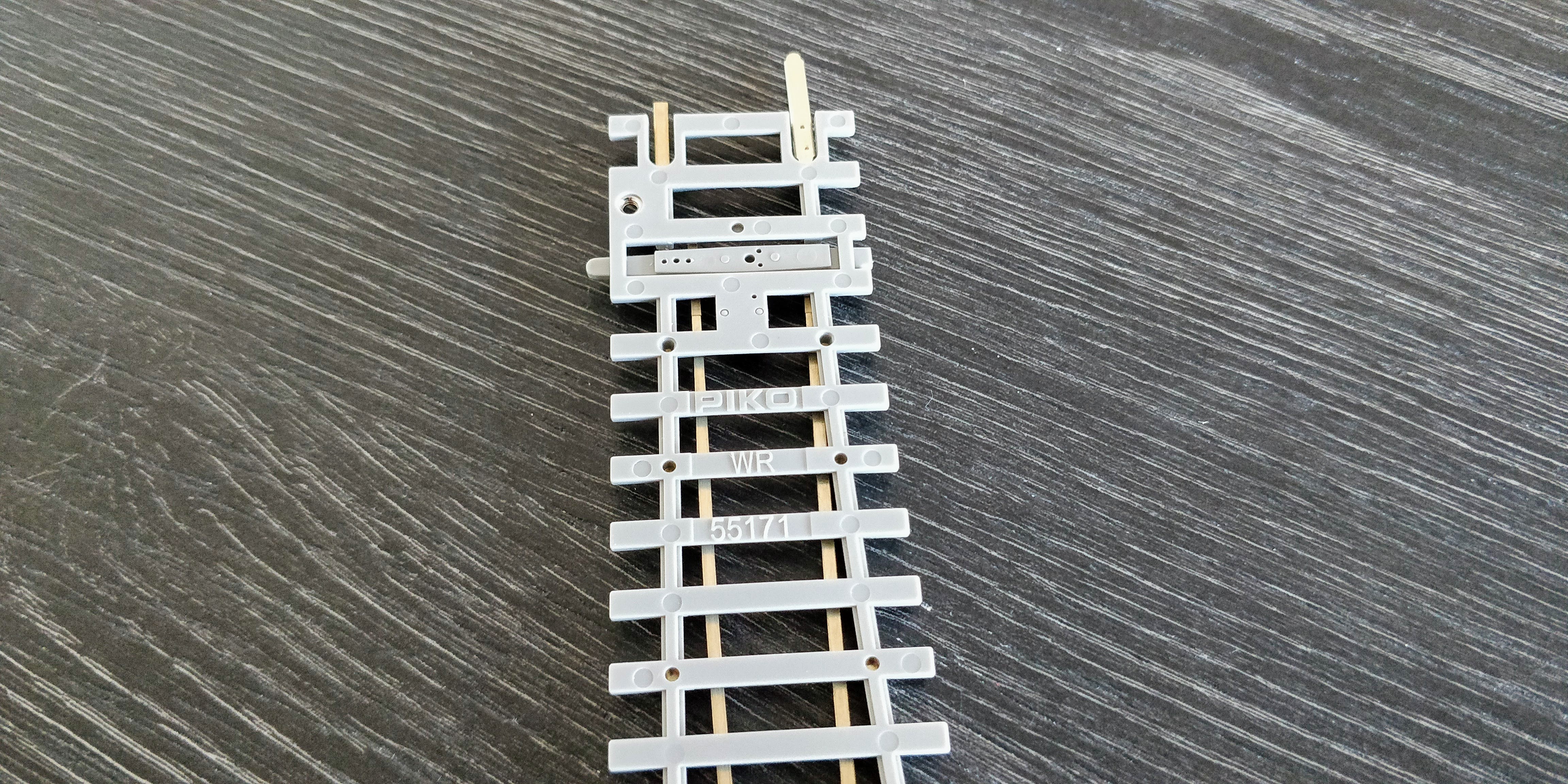 Rail joiners are pre-attached and of the usual quality. The track is easy to put together, but can also be rather fiddly at times. You will need to take care if you are often setting up and taking down your layout.

This year (2019) PIKO announced a version of the A-track with ballast. This might also do the trick, but you will still have to fight with rail joiners. I have not yet had the ballasted version in my hands so there is not much I can say about it. 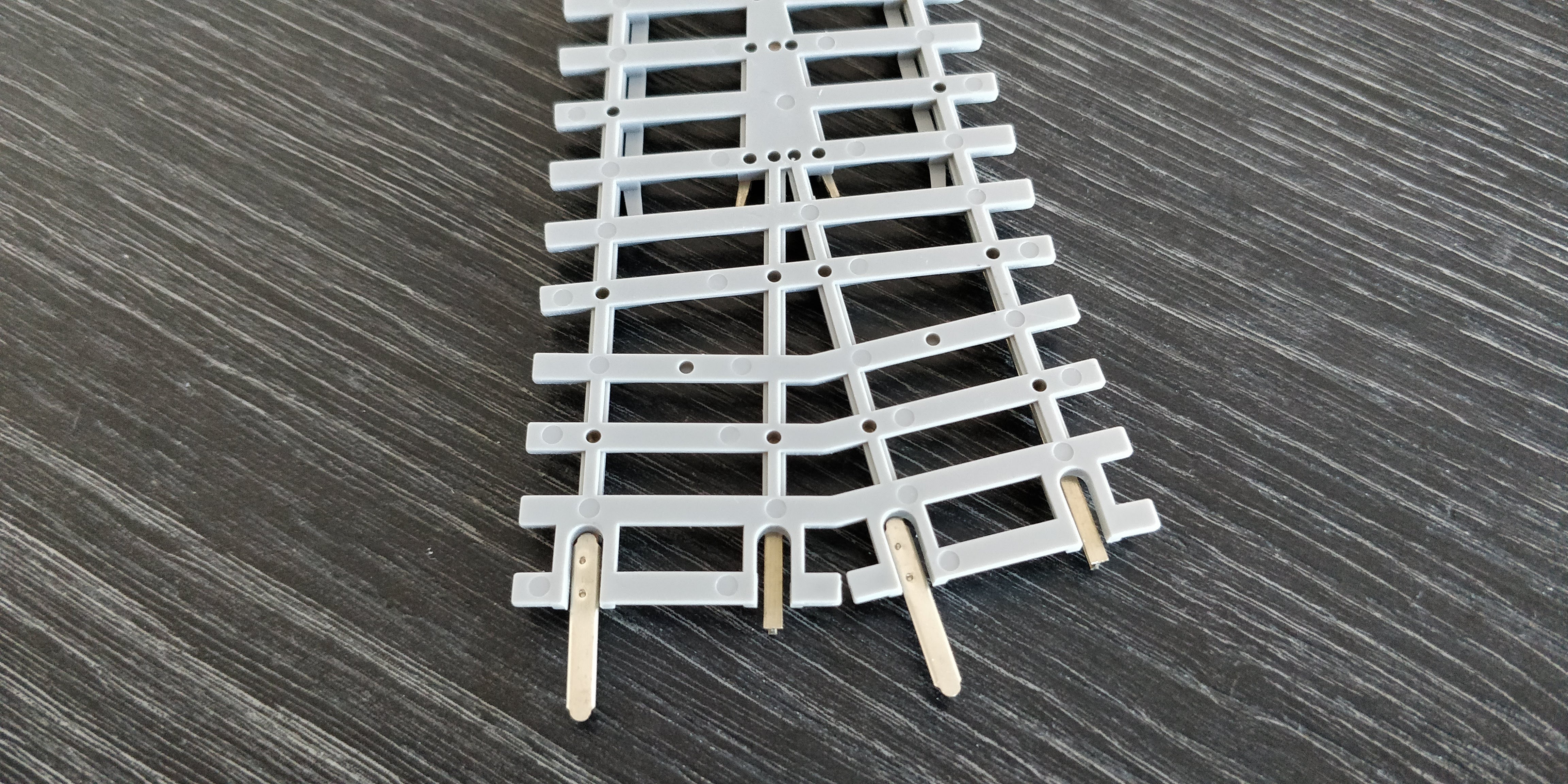 Is it all good you might think? Well, for a start, I do like this track. I find it to be great value for the money. Yes, there are other track systems out there, but they also come in at a heavier price tag. The PIKO A-track, as with much of the PIKO stuff, has a price and quality that go very well together. This is what I like about PIKO.

That being said. I do have one point where this track could need improvement. The track does not align well when put together. As you can see on the picture below, I have put the tracks together as you normally would: No gap between the rails on either side. 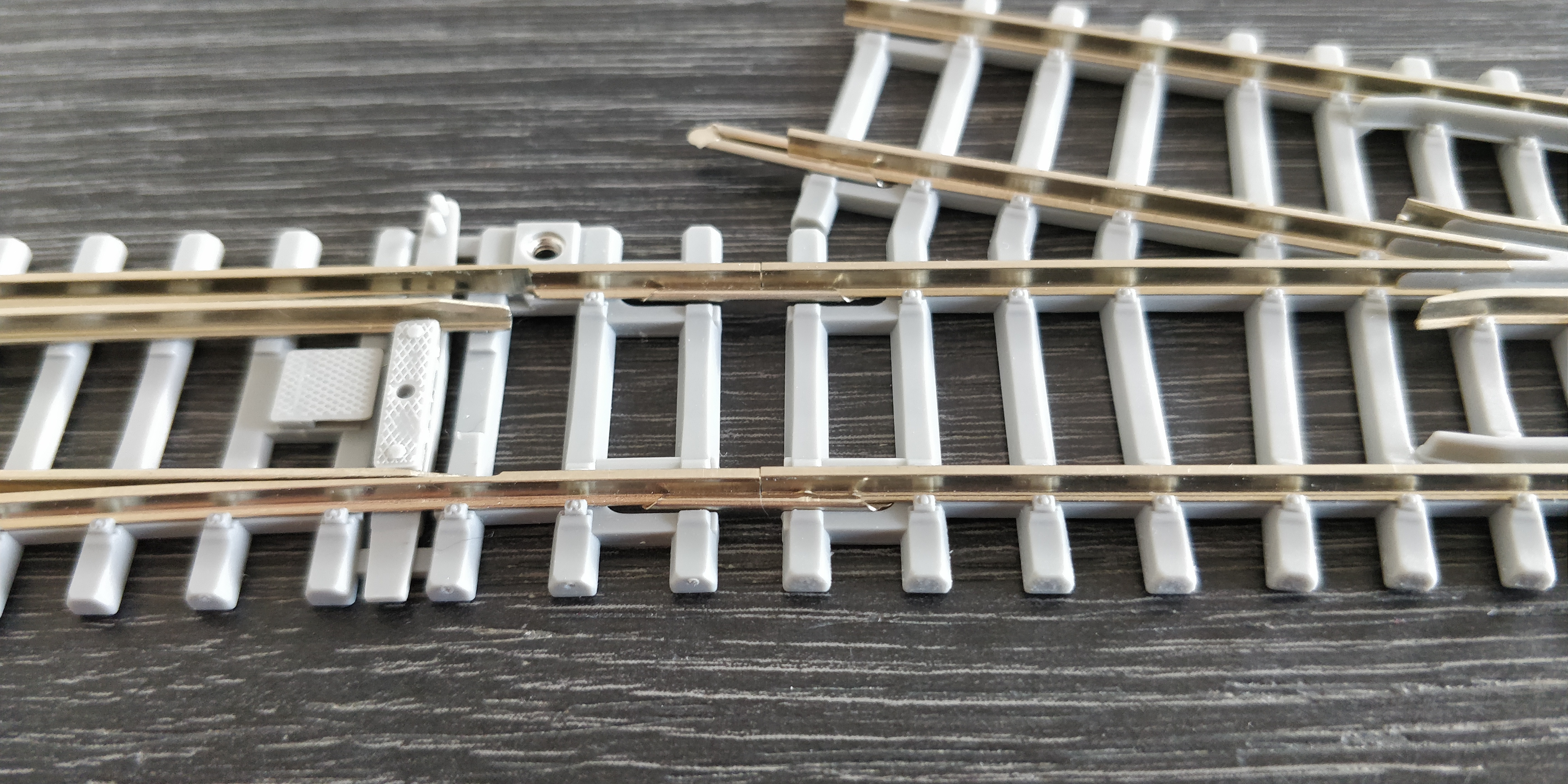 This will cause the track to not be completely straight. Like this, notice the slight bend on the last turnout. 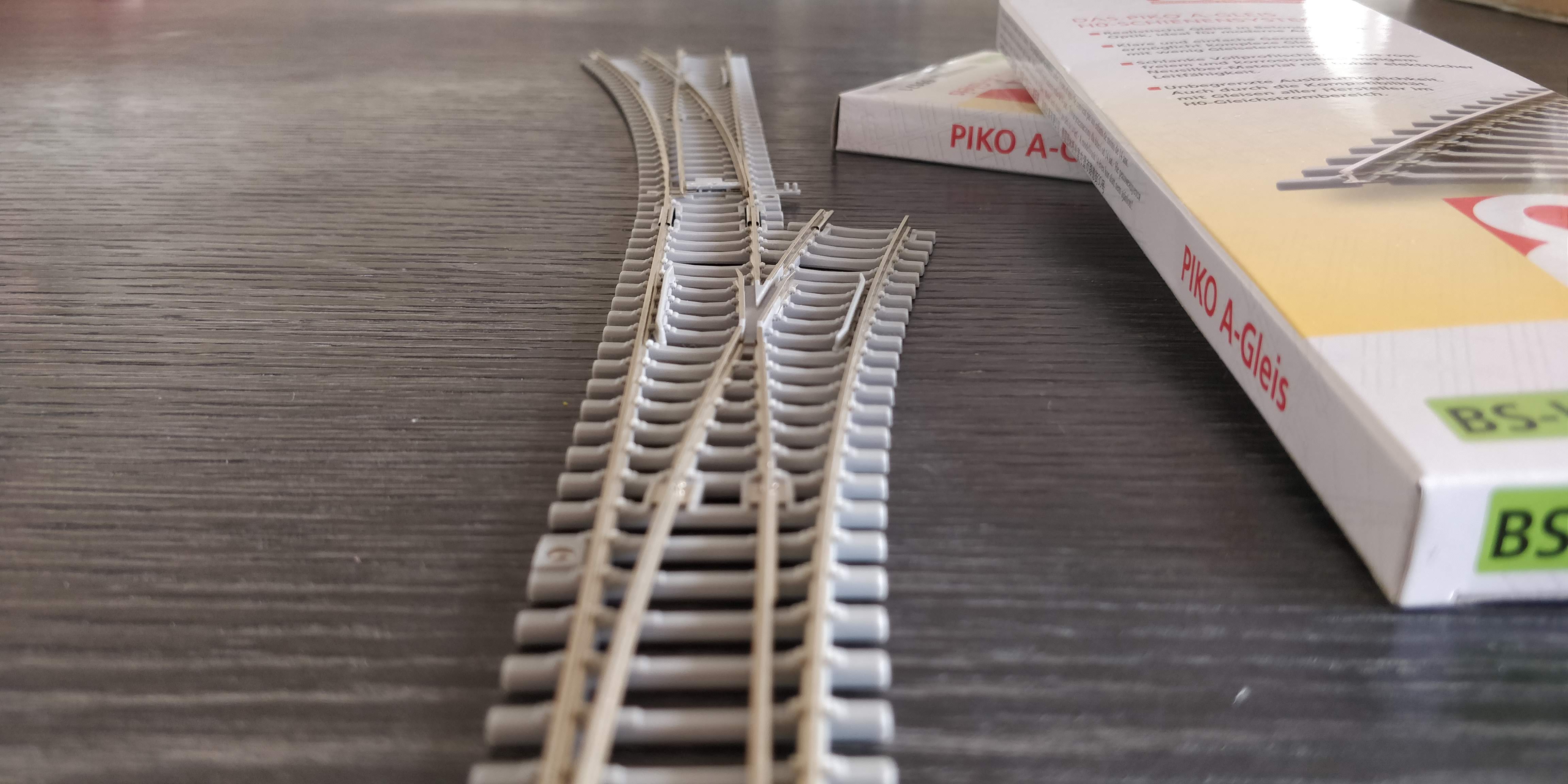 You have to adjust the track to get it straight. Like this, notice the gap between the rails at the bottom, but no gap at the top.

Now the tracks are straight, no bend. This is not something related only to my two samples, I see this often with the PIKO A-track pieces. So it is worth mentioning. 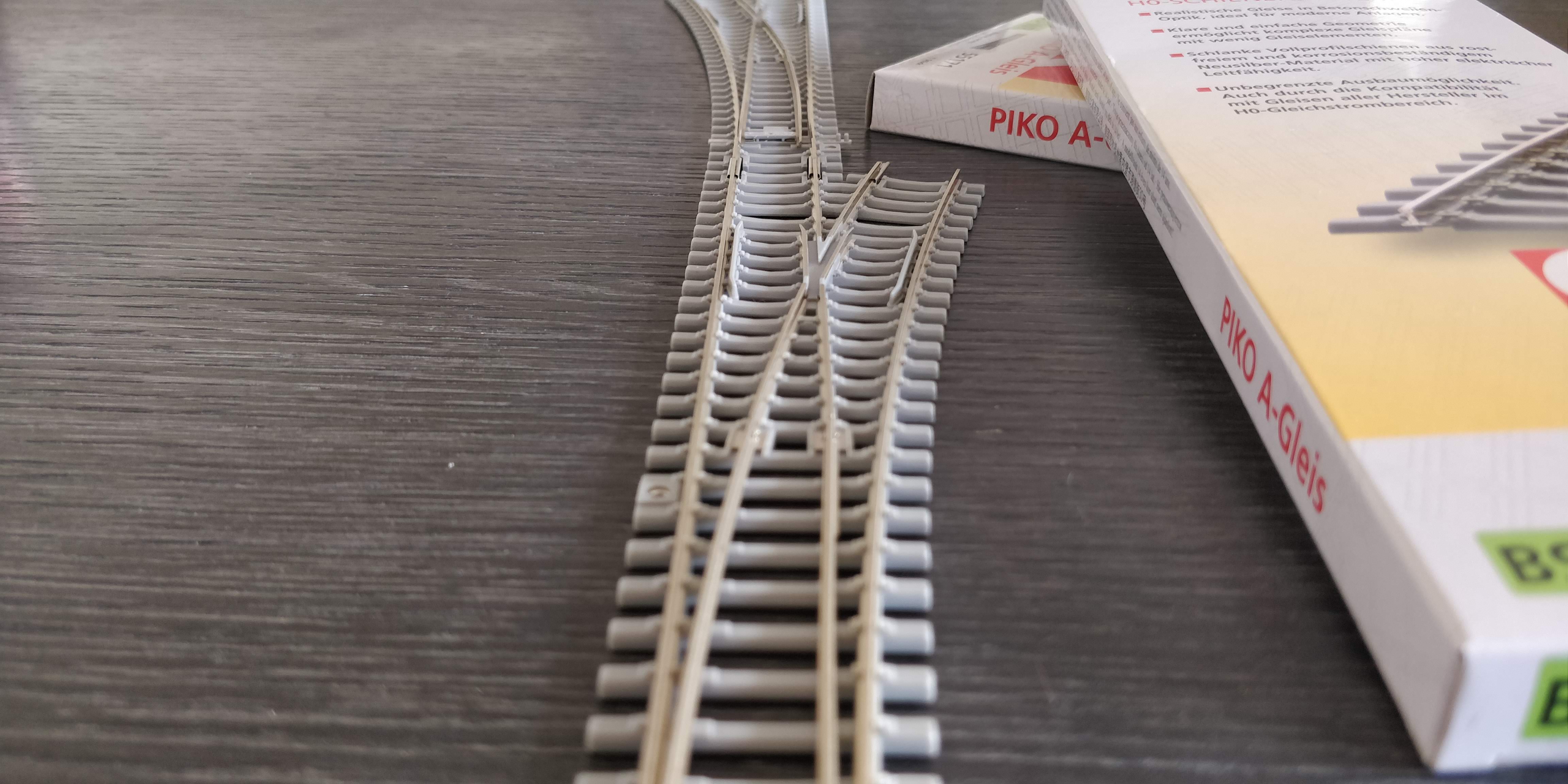 Is this a problem? Not really, but it is something you have to be aware of. How much adjustment there is needed differs from track piece to track piece. If you use flex track it is not a problem at all, since you have to align the track anyway.

A turnout with concrete sleepers is a very welcome addition to the PIKO A-track programme. Besides a version from PECO this is the only concrete sleeper turnout available on the European market. It feels sturdy and robust and overall nice quality. It is not as expensive as other track systems and that is also good.

It can be a bit fiddly to build straight lines, but you can compensate for that when putting the track together. Definitely room for improvements here.

In general I believe that you will find a concrete turnout a fun addition to your modern era layout and combined with the PIKO servo motor you can automate it and make it look awesome.

If you run code 83 but desperately want a concrete turnout, PIKO offers converter rail joiners that will raise the code 83 track to code 100 height. The product number is 55294.

The PIKO A track seems to be a good seller. It has won a lot of fans. I would bet though that PIKO would be able to sell even more of this track if it were code 83. That would be truly amazing. So there is an idea.