Trix Club Wagons Through the Years

I have been a member of the Trix Club for ages. I enjoy the magazine and the club materials that I receive. Each year Trix also releases a special wagon just for club members. You get the wagon as part of your membership fee.

These wagons are not just some random wagon with a Trix logo. They all have some root in the Franconian/Bavarian history. I think it shows that Trix actually thinks quite a bit on what story their club wagons should tell.

I thought it would be fun to write a post about the club wagons, as they are something I look forward to each year. I also think they are beautiful models.

So here they are, every single wagon since the beginning of the Trix Club in 2000.

The first wagon is a goods wagon from the brewery Joh. Humbser in the city of Fürth, Bavaria. The brewery was founded in 1782 and closed in 2008. Some of the buildings can still be seen today.

The wagon is a standard K.Bay.Sts.B (Royal Bavarian State Railways) goods wagon with a little cabin for the breakman. 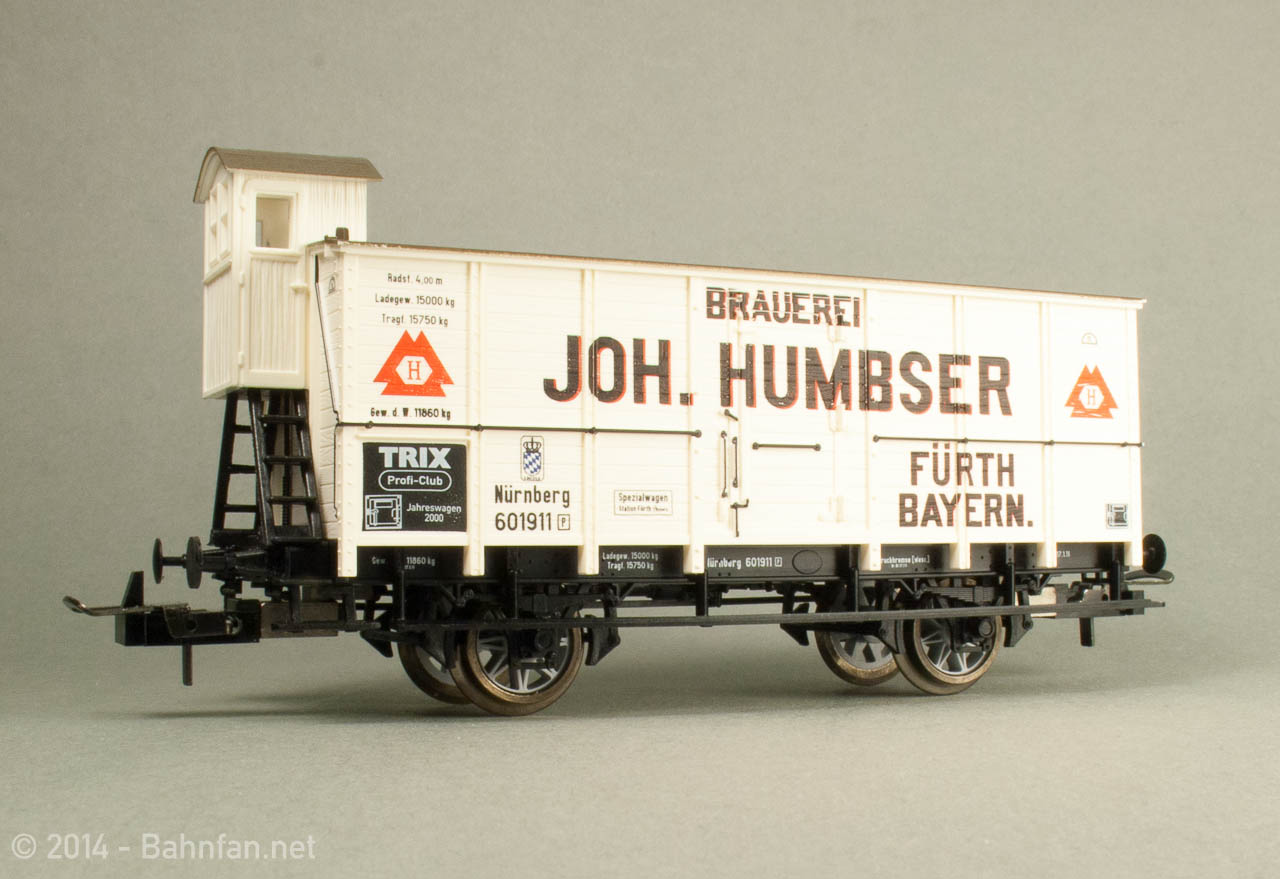 The 2001 club wagon is a special tank wagon from the city of Fürth, Bavaria. All Trix Club wagons represents some kind of era I wagon from the Nuremberg region. This is where the Trix company has its roots. 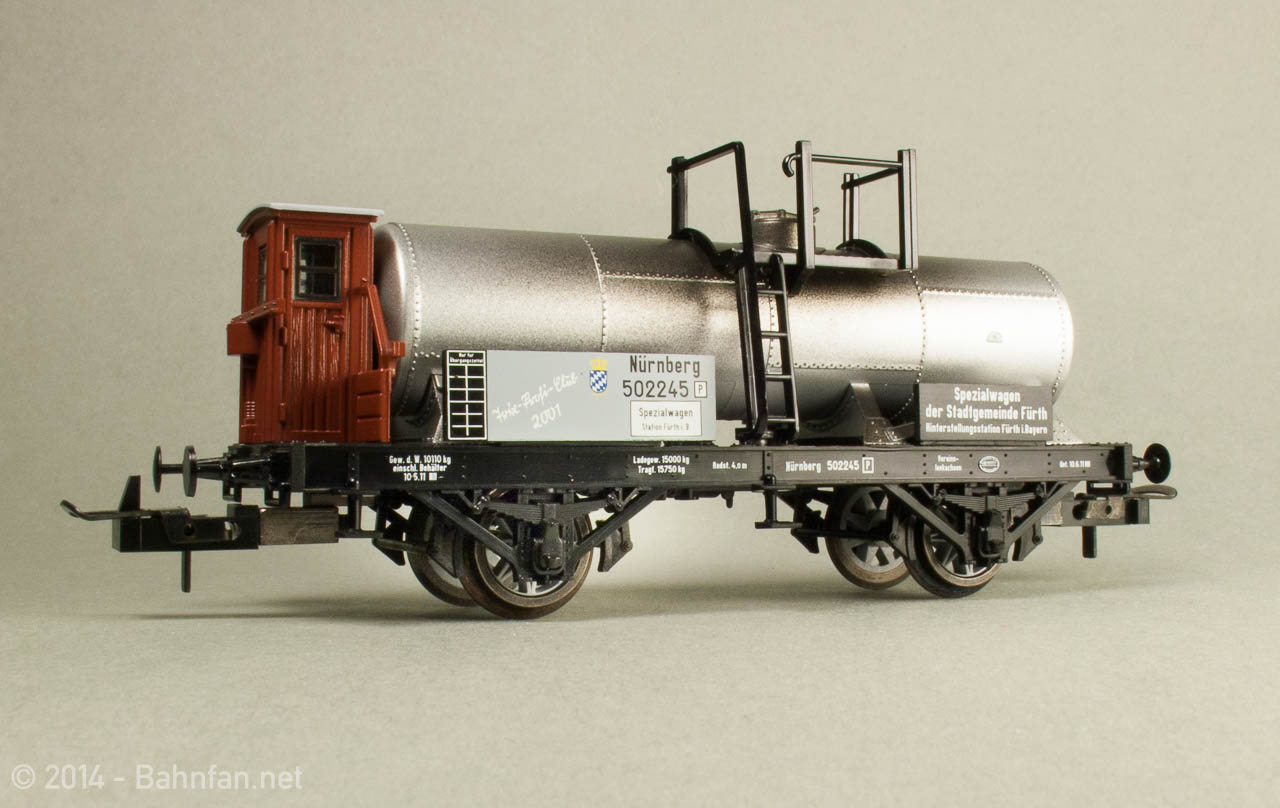 Coal were needed for lots of things in the good old days. Especially on railways of course. The mobile crane was the club wagon of 2002.

I have not been able to find any information on a company called "P. Henlein". P. Henlein could also just be a tribute to Peter Henlein who was a clock maker from Nuremberg (1479 - 1542). He made small wearable watches.

This is my absolute favourite club wagon. I like the detailing and the fact that you get two wagons. It was also the first club wagon fitted with the Märklin short couplers. 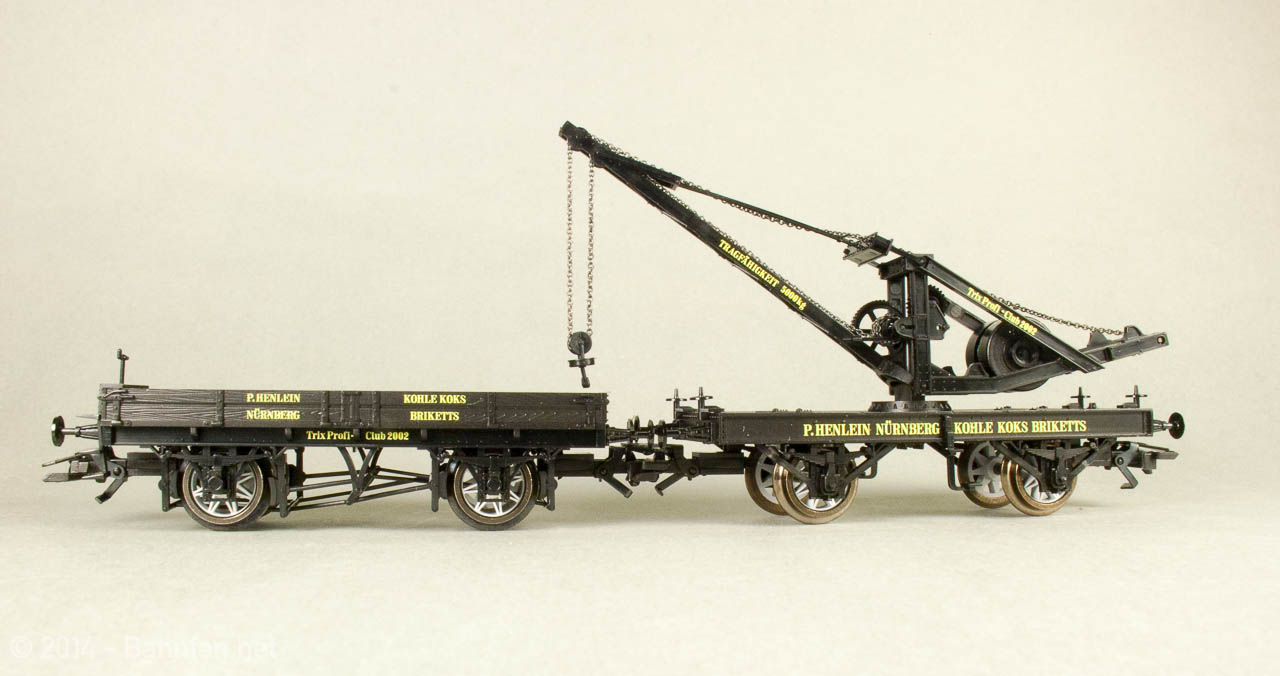 Ludwig the 2nd was the king of Bavaria from 1864 until his death in 1886. He is known for commisioning the construction of the fairytale'ish Neuschwanstein castle near the village of Hohenschwangau, Bavaria. (The castle also happens to be the inspiration for the Disneyland castle). The Trix Club wagon for 2003 is a small flat goods wagon loaded with a statue of the famous king. 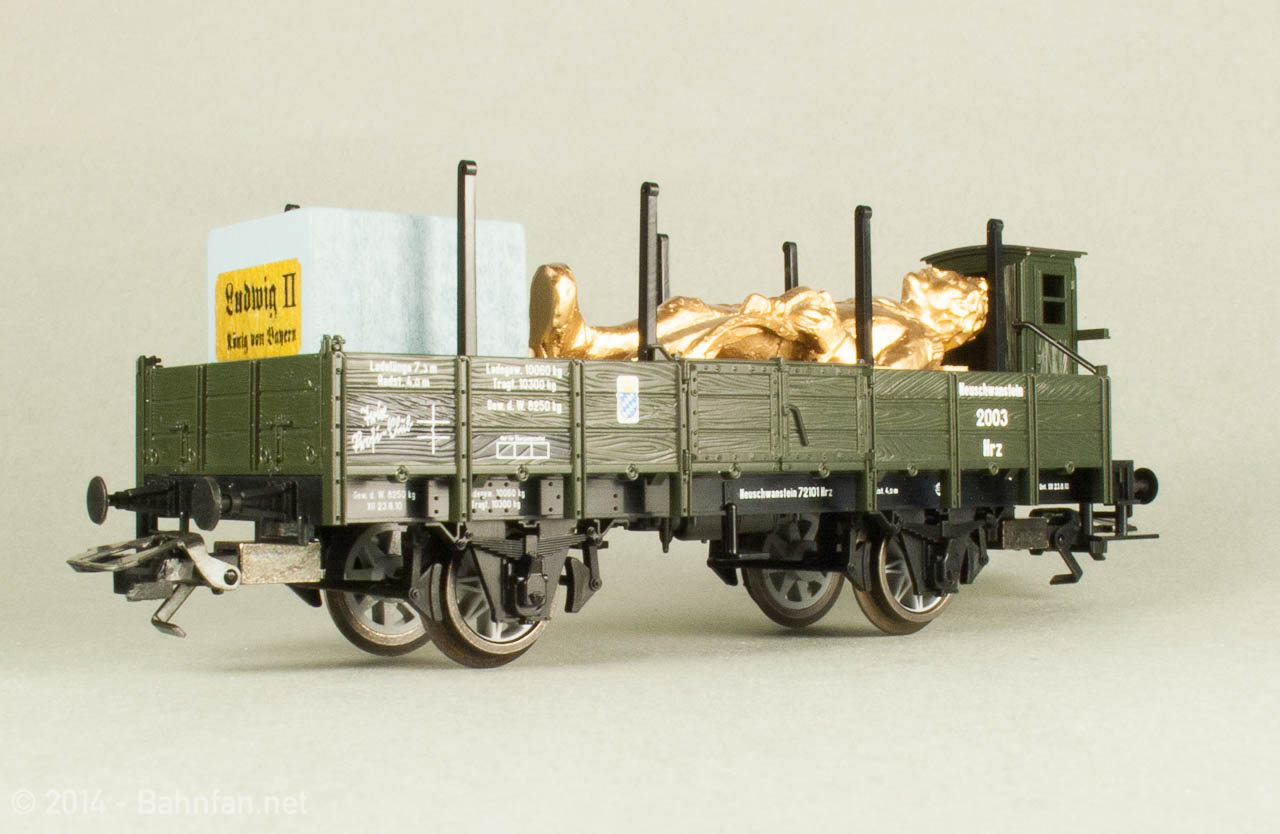 The Fürstlich Castell’sche Domänenamt is one of the oldest wineries in Germany. All vineyards are located within close proximity to the village of Castell and are influenced by the continental climate, the Keuper Soil of Franconia (sediments of an European Ocean from 250 million years ago) and their position on the slopes of the Steigerwald forest.

The club wagon of 2004 is a wine transport wagon with the logo of the winery. 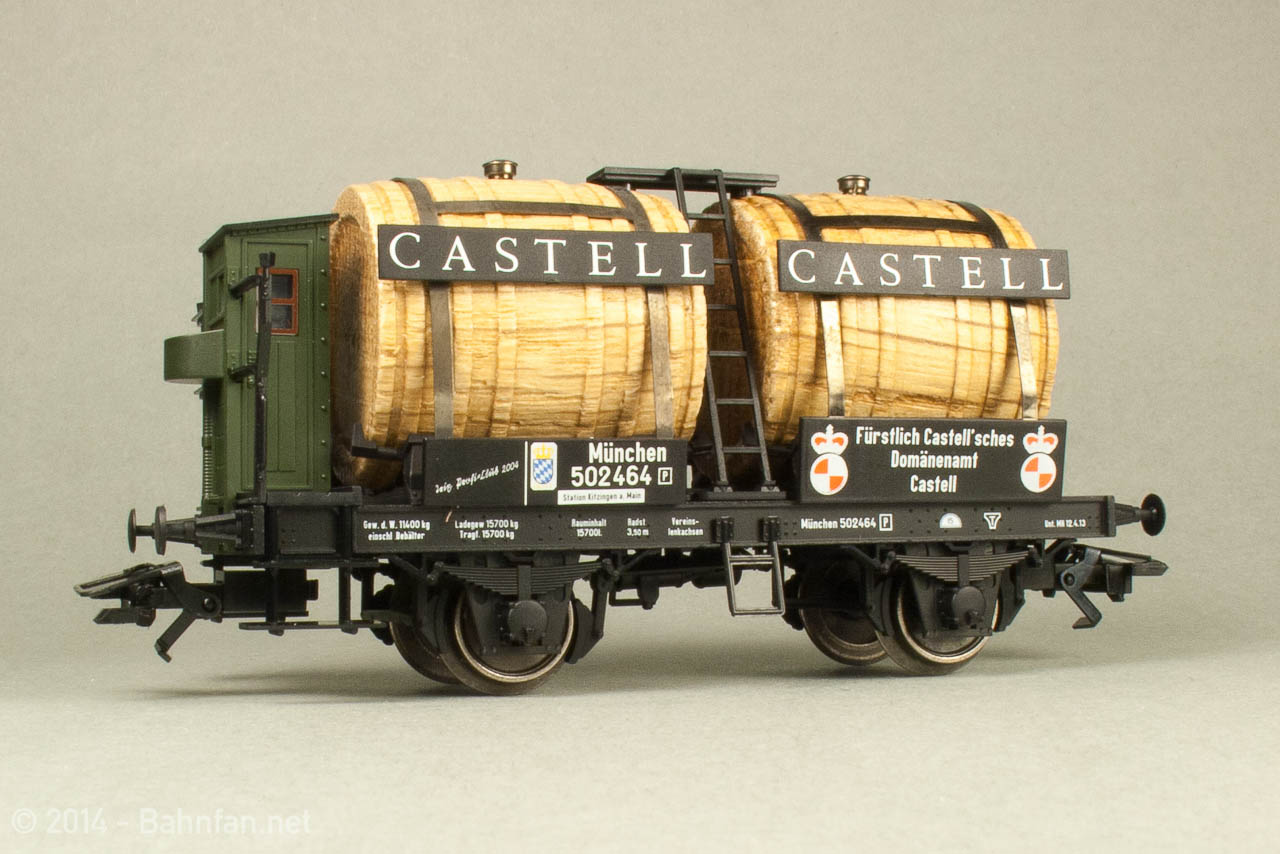 The origins of the maypole tradition is unknown, but it may have originated somewhere in the middle ages and survived Christianisation, but every knowledge of its original meaning is lost. The tradition of raising a maypole on May Day is often followed up with a maypole dance. The tradition is found within the nations of Germanic Europe.

The Trix club wagon of 2005 is a long flatbed goods wagon loaded with a maypole.

One of the most famous tents on the Munich Octoberfest is the Ochsenbrateri (Ox roasting). "Come and see the roasting of an entire ox". On a poster from 1881 butcher Johann Rössler uses these words, and invites people to see his new mechanical ox rotisserie. The 2006 club wagon is a livestock wagon with the name "Johann Rössler Ochsenbraterei" on its sides. The wagon comes with six oxes to put inside.

I don't know if the wagon ever existed, but the Octoberfest tent sure did, and still does today. Visit http://www.ochsenbraterei.de/en/ for more information.

This is one of my favourite club wagons.

Today the Stein brewery still produces beers and has done so for over 500 years. I am sure you have seen the Steiner logo, if you have ever visited Europe. 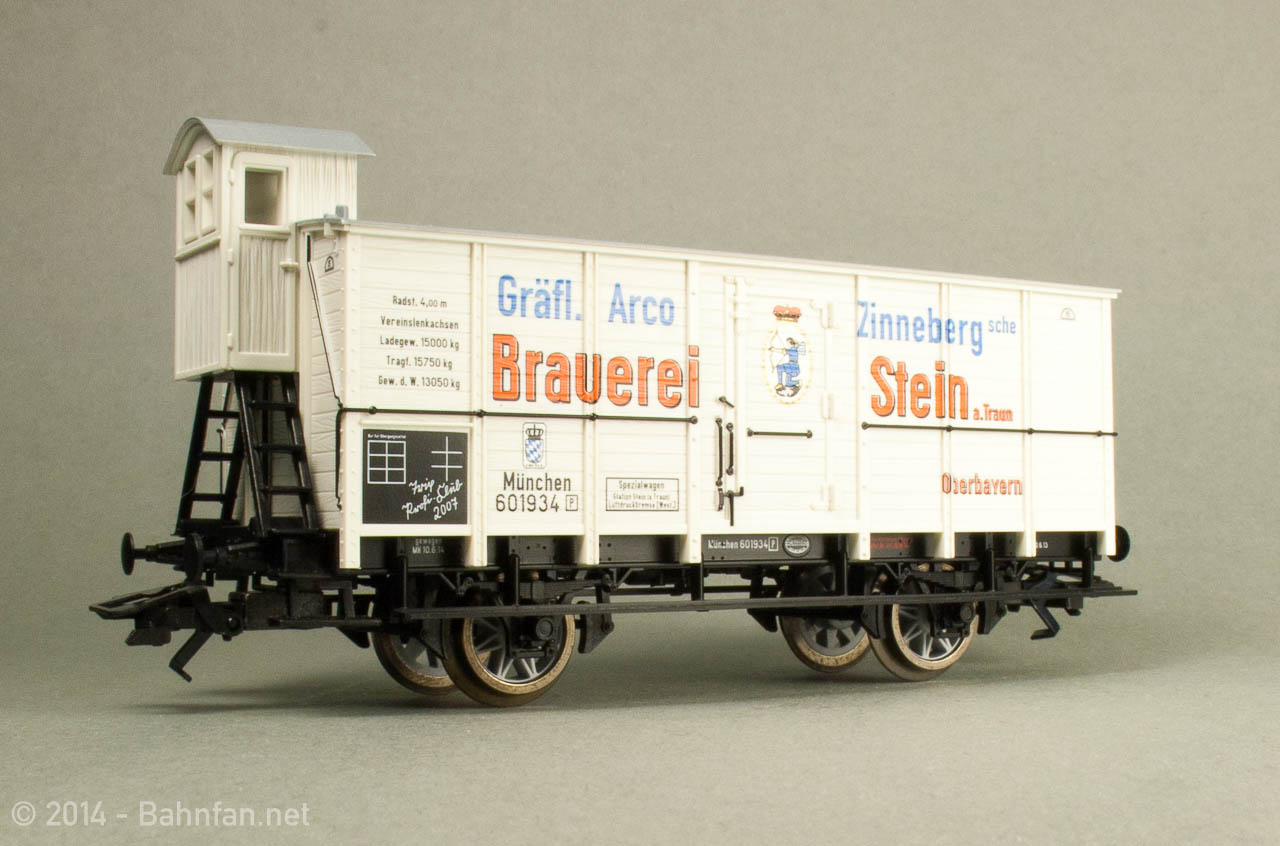 "Gesellschaft für Linde's Eismaschinen AG" (Linde's Ice Machine Corporation) is the predecessor of the Linde Group (as it is called today). The 2008 club wagon is loaded with high pressure gas tanks. 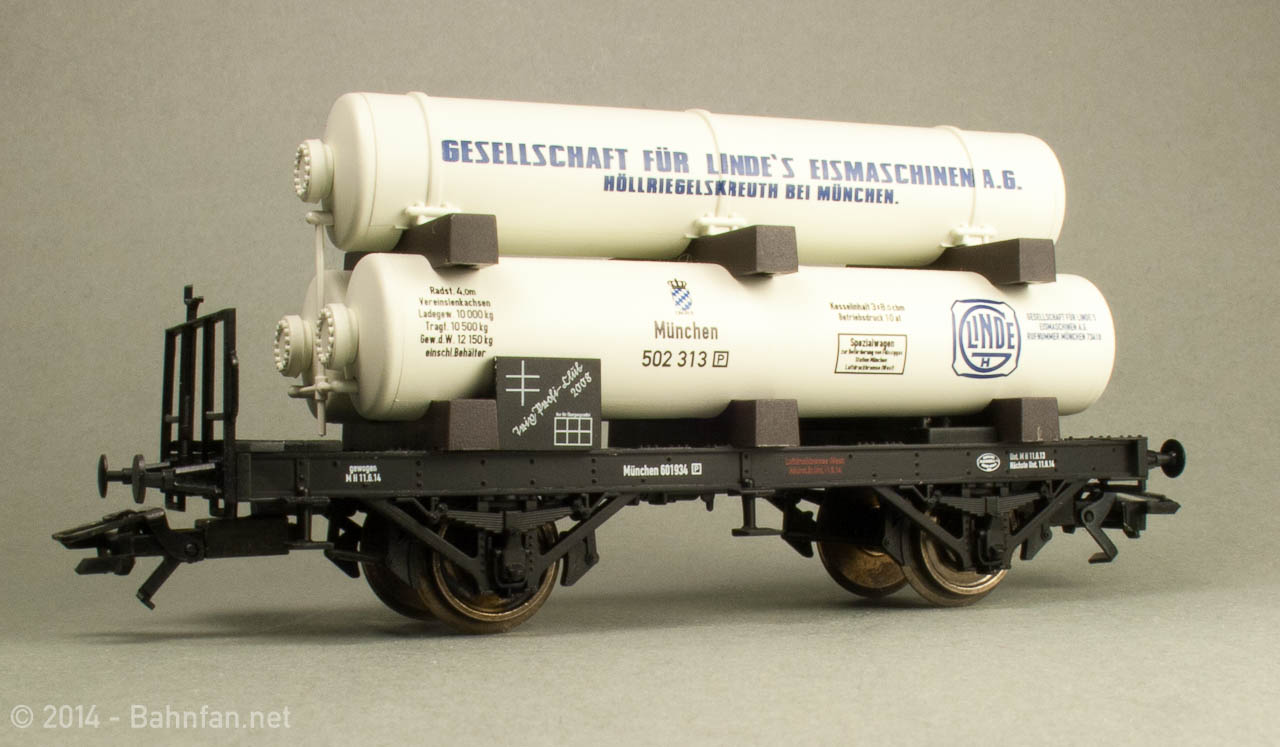 Aah milk! Don't you love it? I know I do! Milk was transported in special milk wagons and in the days of the Royal Bavarian State Railways this was no different. This very small wagon is lettered for the Bayerische Milchversorgung (Bavarian Milk Distribution). The company was founded in 1930 and had its headquarters in Nuremberg. Today only little is left of the company buildings.

The club wagon of 2009 is very, very small only 81 mm (3.1 inches) long. I like the wagon very much, because of the cute size and the detailing. 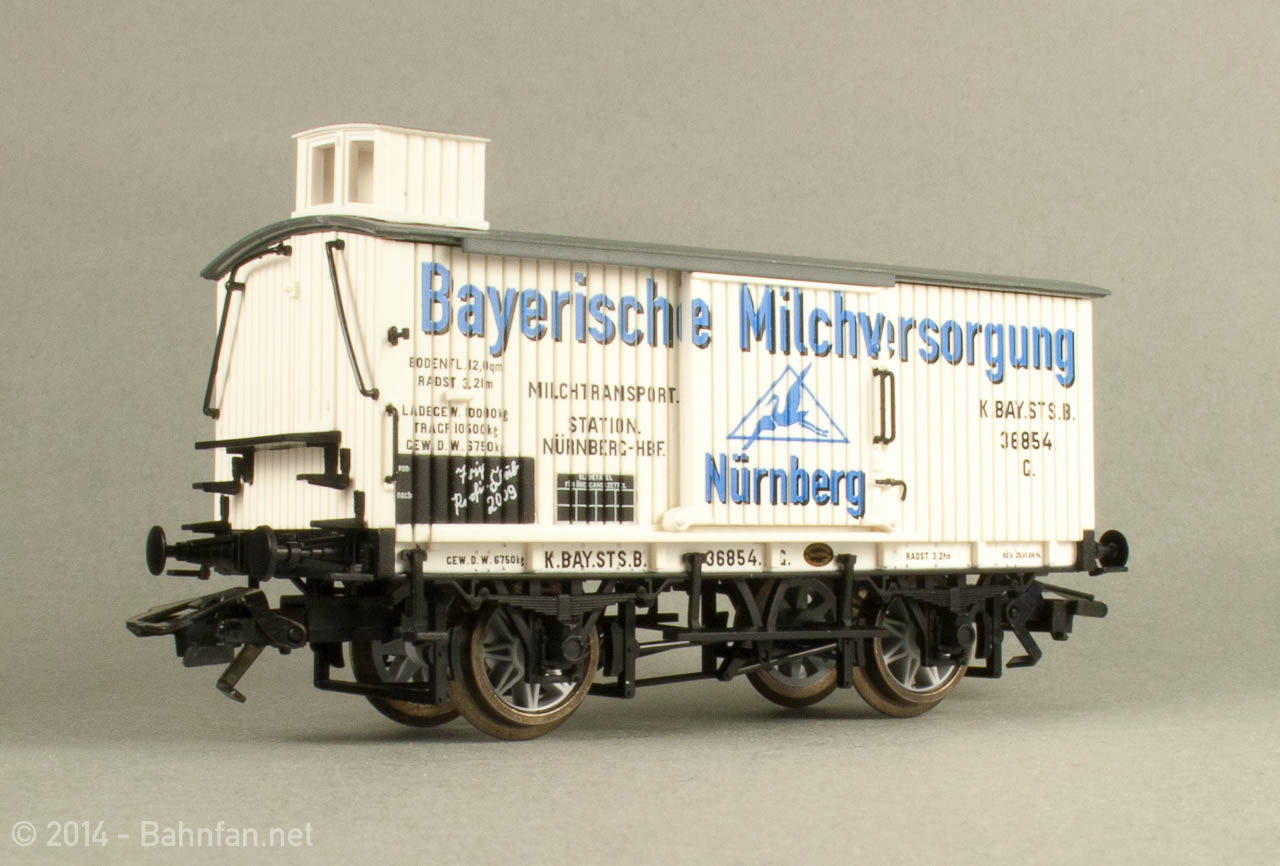 Johann Michael Bast was a businessman from Nuremberg. His factory "Presshefen- & Spiritus-Fabrik AG" (Yeast and Spirits Factory) produced, as the name implies, yeast and spirits. The story goes that the breweries went from top-fermenting production to bottom-fermenting production methods. This created a shortage of yeast in the entire region. Mr. Bast saw this as an opportunity and started to produce yeast. The club car looks as it would have around 1910. 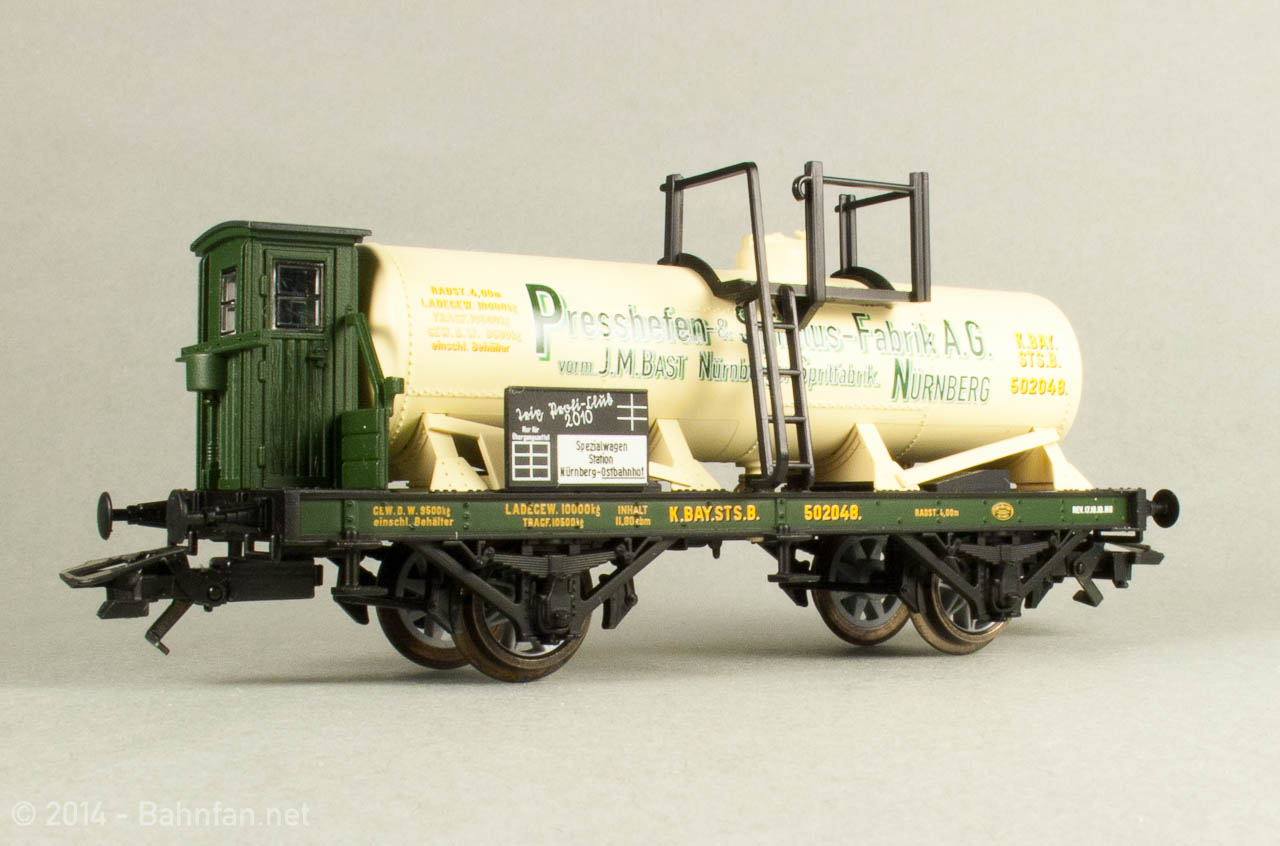 Founded in 1865 the Company "Tonwarenfabrik Schwandorf" in Schwandorf, Bavaria produced ceramics (tonwaren). The main products were bricks and tiles (roof- and floor tiles). But occasionally finer pottery and the like were also produced. The company closed in 1994.

The Trix Club wagon from 2011 is a privately owned hopper of the Tonwarenfabrik. 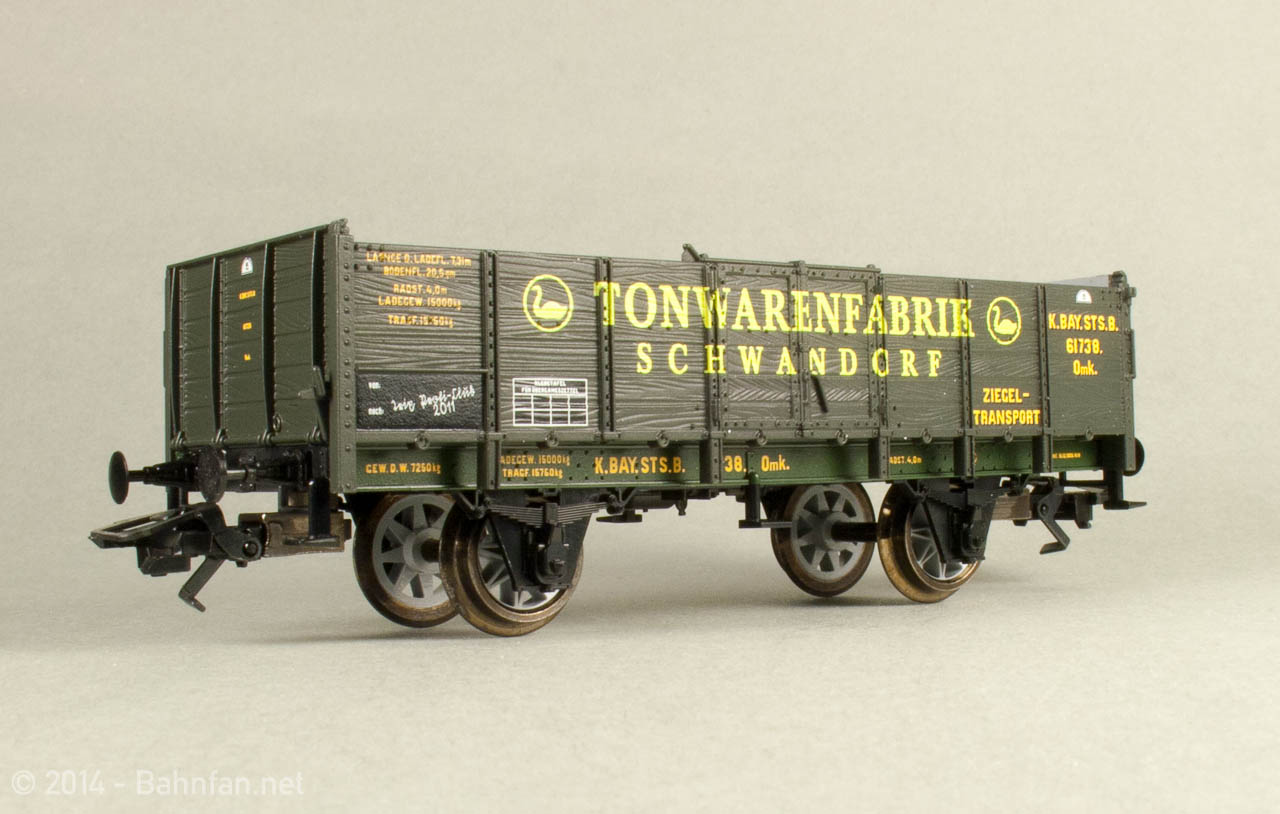 A lot of wine is produced in the Franconian region and the club car from 2012 is yet another wine transport. This time it is a privately owned wagon from the Meuschel wine company. The history of the company starts in 1826 when winegrower Johann Wilhelm Meuschel made a business of bringing wine from the Franconian region to the northern regions. This turned out to be a very good idea as the demand for wine was high.

In 1845 his son (Johann Wilhelm Meuschel Jr.) founded the company "Wilh. Meuschel jr." which is the name on the club wagon.

The name Meuschel is famous for its various wine products. You can visit the company website: http://weingut-meuschel.de/ 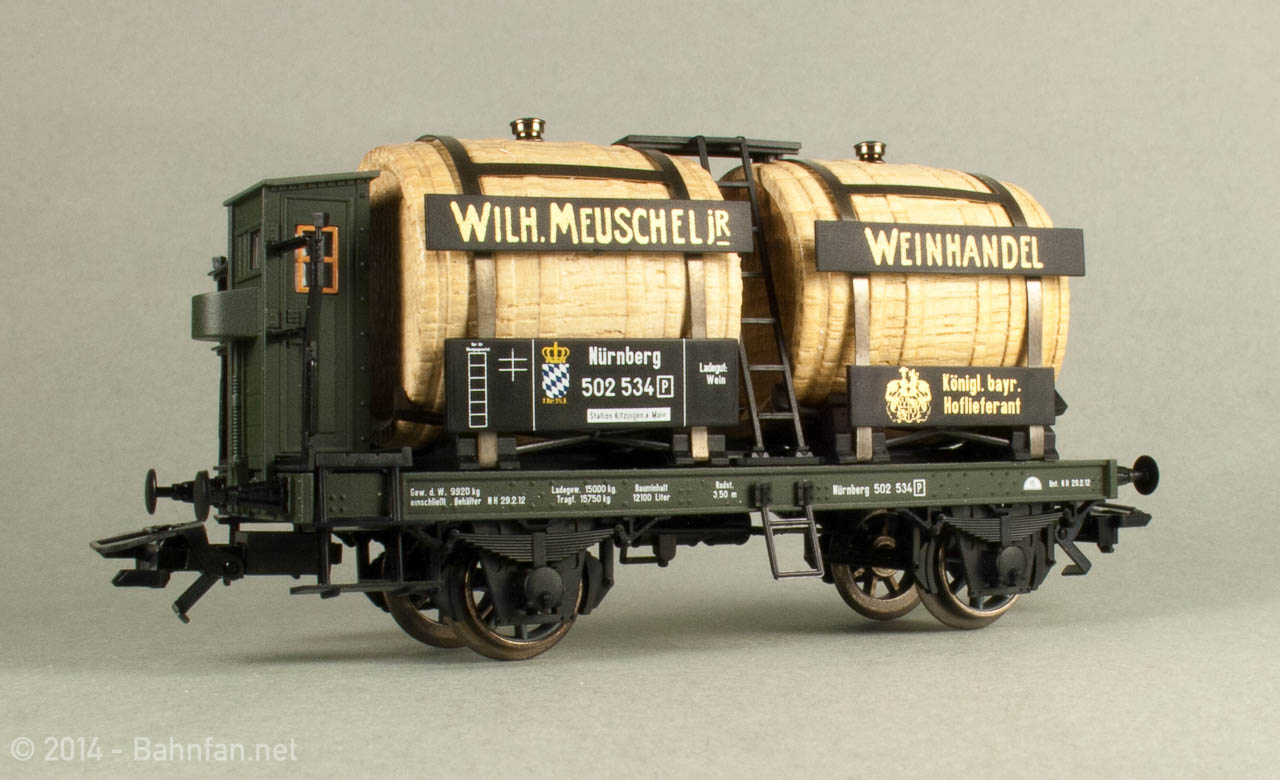 Trix announced this year, that they will change the theme for the club wagons slightly. From now on it will be a mix of wagons from different eras. Up until now, it has only been wagons from era I, but in the future we will see era III club wagons as well. I think this is a shame, but the customers have spoken.

I am planning on getting a great K.Bay.Sts.B freight locomotive to haul my club wagons, but I am still not sure which one to get.

Perhaps Trix should make a club model to haul their club cars. That's an idea! So Märklin, and I know you are reading this, now you know what to do next! :-)

Where is the club car for 2013? Yes, where is it? Truth be told, I have no clue. Märklin has yet to release the 2013 club car to the members of the Trix club - at least in H0. According to the factory spokesperson, the wagon should be available around April/May 2014.

Update: The club wagon for 2013 arrived. Check out my review!