True to scale coaches vs the shorter length coaches

For ages European model railway manufacturers have produced shortened versions of the UIC passenger coaches. This often results in discussions on various model railway forums and often the dicussions goes into a religious debate on "what is the most right thing to do".

The short version of an answer would be: We run H0 and that means everything should be in 1:87 scale and that is about it.

Of course the real answer is a bit more colourful than that: At the end of the day, model railways are always a compromise and you will have to decide for yourself what compromises you can live with on your layout. That is your choice and it should not be influenced by judgemental people or rivet counters.

The reasons for running shorter versions of the coaches are many and everybody seems to have different opinions. I for one has always been keen on the 1:87 scale coaches for no other reason than them being true to scale.

I own a few 1:100 scale coaches. Those are to me the worst compromises. Simply because they are significantly shorter than true to scale coaches. Take a look at the picture below:

The coach in the front is 1:100 in length scale and the coach behind it is true to scale.The shortened coach is around 4 cm (1.5 inches) shorter.

I never run my 1:100 coaches anymore. I just cannot come to terms with fact that it looks weird next to a train with true to scale coaches.

Some people will argue that shorter coaches looks better on smaller curves than longer coaches. While it is true that smaller coaches tends not to "hang" as much over the side of the rails, they still do. I think both coaches look equally crappy on small curves, but you can judge for yourself:

The Hobbytrade true to scale coach on a R1 C track.

I never really had any problems with my true to scale coaches. I never cared on how they looked on smaller curves, because that is kind of how it is on a model railway. I accept the way it looks, and instead I tend not to use smaller curves thus keeping the weird looking parts to a minimum. I know that not everybody can do that, and this is where the compromise comes in: What can you live with on your layout. It is up for you to decide.

If you are debating with yourself what to do, I think you should simply go with whatever choice gives you the most play value.

The main problem I have noticed with my track, tight curves and true to scale coaches are: Signals! Märklin produces some fantastic looking signals that snaps under the C track for easy installation. The problem is that a true to scale coach will never be able to pass a signal in tight curves. It will simply hit the mast.

A true to scale coach cannot get past the signal on a Trix C track R1 curve.

Surprisingly the shortened coach (1:100) does not do much better, it just barely passes the signal. 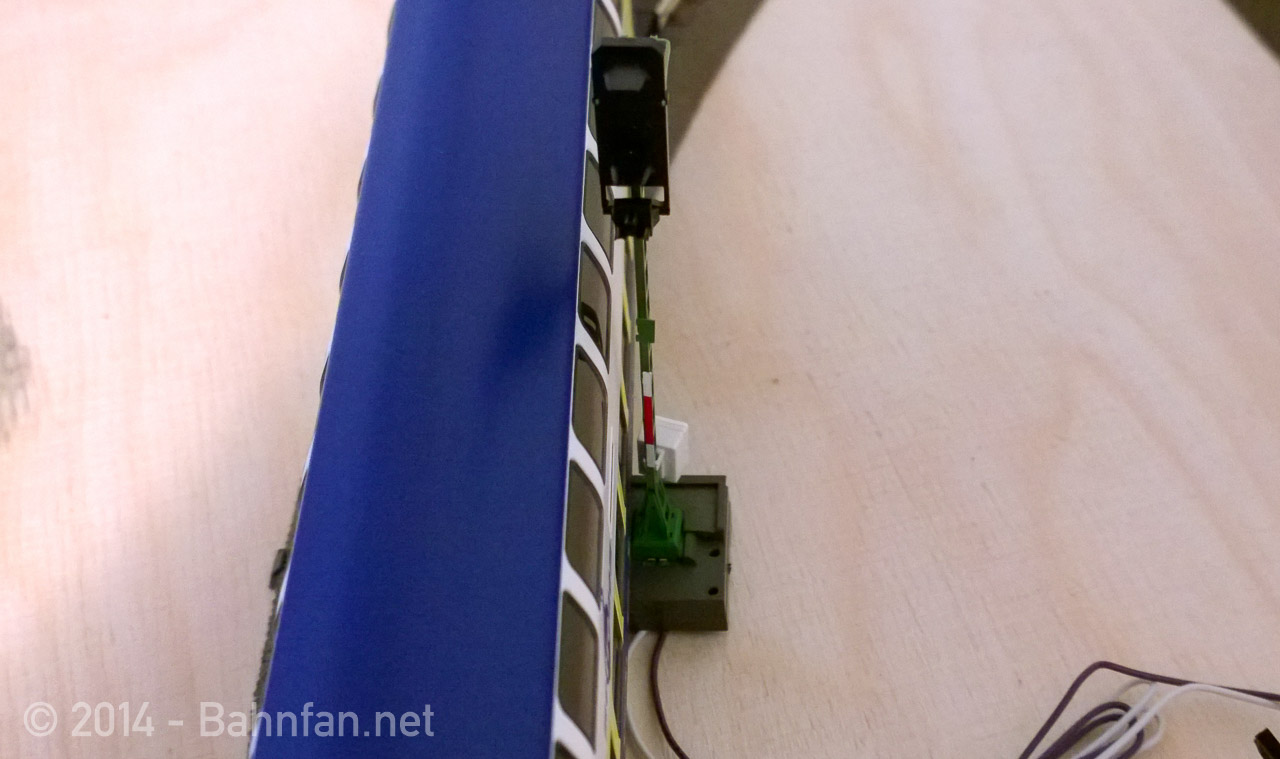 A Trix Metronom coach just barely passes the signal on a R1 curve.

If you are going for the Märklin signals, the C-track and longer coaches. Please keep this potential problem in mind. I recommend not placing signals in curves tighter than R4 (R4 is 579.3 mm / 22.8 inches). From R4 and up you will have no problems. 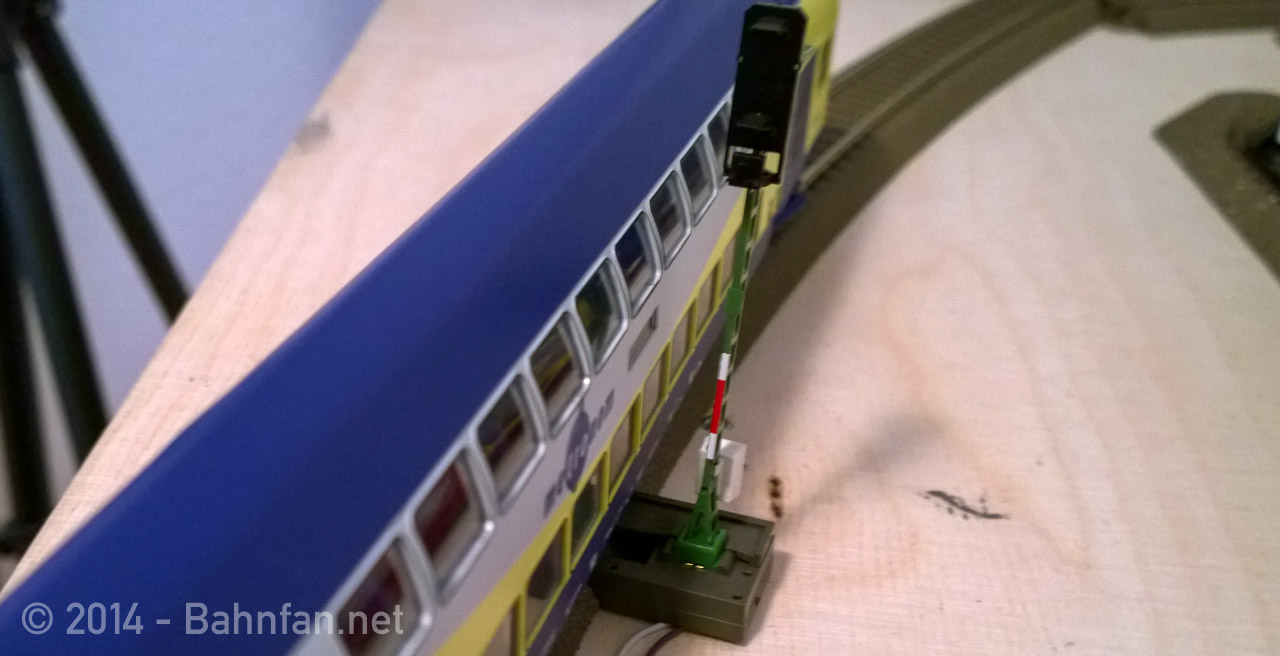 A true to scale Hobbytrade Metronom coach is passing a signal on a Trix C track R9 curve.

If you are going for other signal types you can place them far enough away from the track to be out of the way for the passing train. For my Viessmann signals I have created a small wooden foot. This allows me to use them as temporary signals as well. 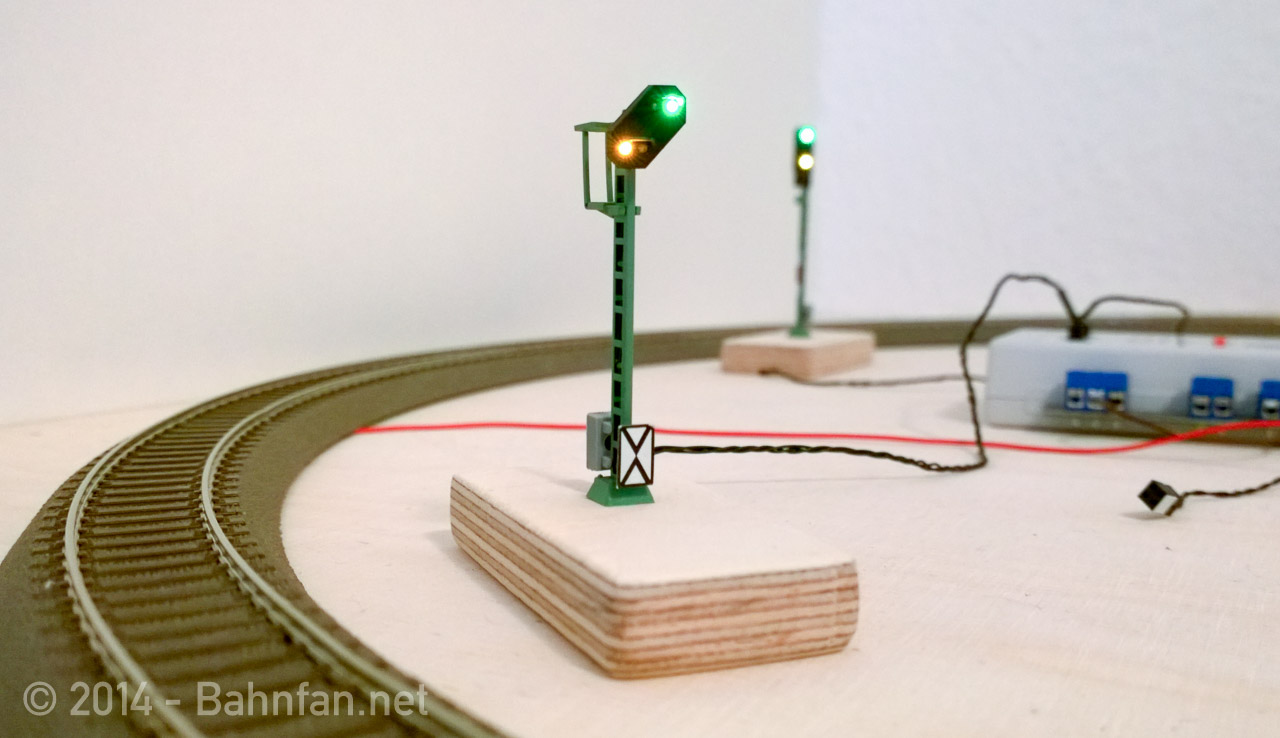 Putting a Viessmann signal on a small wooden foot can help compensate for the problems with true to scale coaches in tight curves.

Of course this could have been the end of the discussion. In the recent months though, I have looked at some 1:93,5 scale coaches and thought about whether or not they may work for me. I mean there are some really nice coaches in that range and some nice sets as well.

As part of my Trix collection I was keen on getting the "Maus Show Train" (Trix #23486 and Trix #22667). This some what historical train is only available from Trix and Märklin, leaving me with no choice to go for 1:93,5 scale coaches. I think it will be exciting to see how the train looks amongst my true to scale coaches.

The 1:93,5 scale coaches are only 2.1 cm shorter than true to scale coaches. Whether or not that would be visible when running around the layout will remain to be seen. I will update the post when I get some coaches to test.

Until then, run your trains safely and happy modelling!