In the 1960'es the German State Railway (DR, Deutsche Reichbahn) in the GDR (DDR) needed to replace several of the aging pre-ww2 locomotives. Because of the easy access to oil and diesel from the Sovjet Union, the DR decided to go for diesel locotives instead of expanding the electric railway. Which at the time proved to be problematic due to several different causes.

In the early 70'es DR ordered heavy weight diesel locomotives for use in both passenger and freight services throughout the country. The result was the class 130 and the delivery of 853 locomotives from 1970 to 1982. There are several different classes within the class 130 family and this article is about class 130.1, 132 currently known as class 232.

In 1973 Voroshilovgrad Locomotive works delivered the first locomotives with electric heating. The class was named 130.1 and the first two locomotives was named 130 101 and 130 102. They were the only locomotives in the class cabable of running at 140km/h all subsequent locomotives had a maximum speed of 120km/h. The decision about reduced speed was made because the max speed at many lines was 120km/h due to the poor conditions of the railway network. The 130 101 and 130 102 was later renamed to class 754 of the Deutsche Bahn (DB AG).

All subsequent deliveries was named class 132 and a total of 709 locomotives was built.

The class 132 was a universal locomotive for use in both freight and passenger service. They ran almost everywhere except for the small branch lines.

Märklin and Trix introduced the class 232 as a model in the Hobby-range. This means a cheap and simple model, but the models have later found their way into the professional lines, even though they are not technological wonders or especially detailed for that matter. 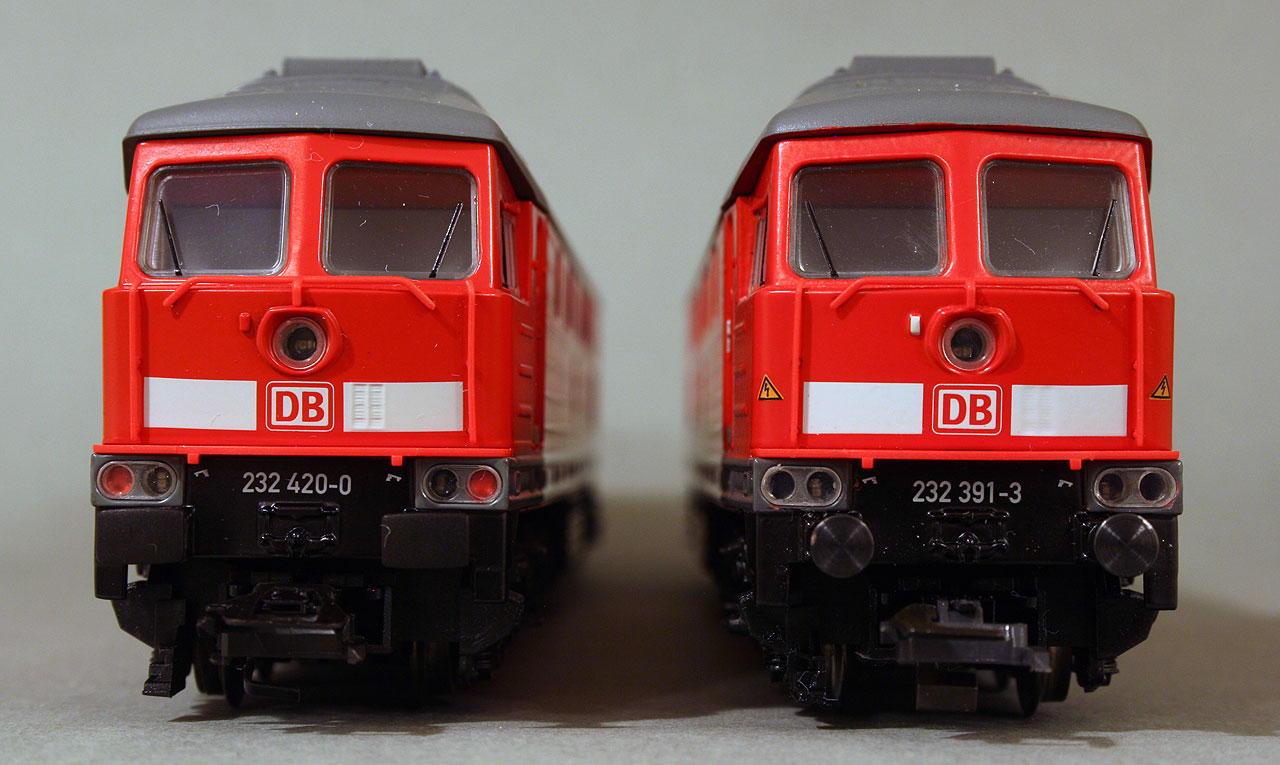 Let me be clear, the model is a hobby version, but it is in no way cheap. It cost about the same as models from other manufacturers. A shame really, because the Hobby models lack features that models from other manufacuters have by default (e.g. taillights and additional detailing). It is still a nice model though, with fine running charateristics and prepared for sound.

The model is made entirely from die cast metal, which makes it a very heavy model. It weighs in at 631 g. The detailing is sparse, but then again, so is the prototype. The roof is made from plastic and comes with seperately applied detaling.

The 232 391 is also delivered with additional roof details, whereas the 232 420 lacks those details. At first I thought it was a mistake, but the photo on the 232 420 box, does not show these details as well. I researched the matter and found images of the 232 420 prototype without these details as well. So there you go. Märklin did not, however, bother to fill the holes where the details are attached to the roof, leaving the impression that something is missing. 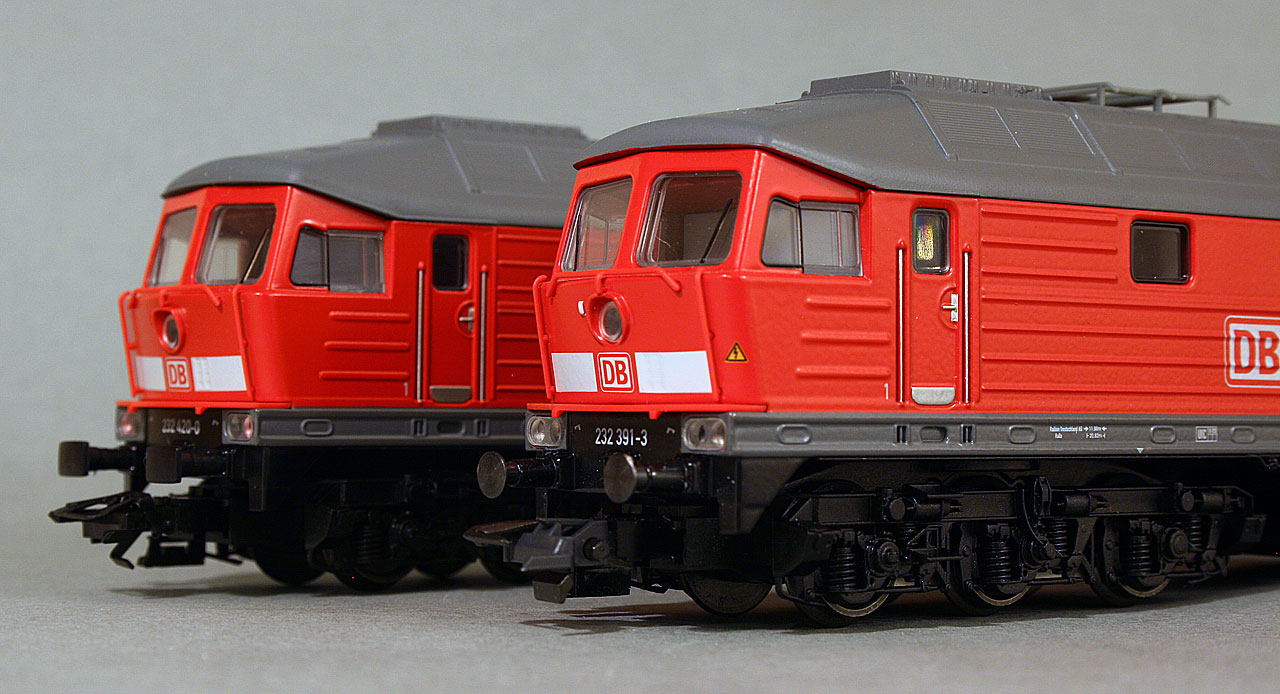 If you are in the market for a showpiece, you might want to consider more detailed versions. When watching the model from normal "model railroading distance", which I say is around 60 cm, you will have a hard time telling the difference on the Roco or Trix version (at least if you do not know exactly what to look for).

If you own any Märklin or Trix locomotive from the Hobby range, you will have an idea on how the model of the class 232 is built. The motor is the same 3-pole motor found in other Hobby locomotives. It is not going to win the "best model railway motor"-award anytime soon, but it works fairly well and with a decent decoder the motor runs fine. Even at very low speed. There is absolutely no reason to go all crazy and replace the motor, just make sure you have a great decoder and you will be just fine.

With the Hobby locomotives from Märklin and Trix, a decent decoder means a world of difference. The built-in decoder in the models without sound is very cheap and has an insanely bad motor control.

The 232 420 has a newer Märklin sound decoder and a good motor control by default. No need to be creative there.

The locomotive is fitted with LED lighting, which unfortunately is yellow. The lighting can be digitally switched off. Many customers replace the yellow LEDs with warm-white ones. I'm not a fan of yellow LEDs, but they do not bother me as much as the white-blue LEDs found on other locomotives. I guess it is a matter of taste. I might replace mine with warm white ones. 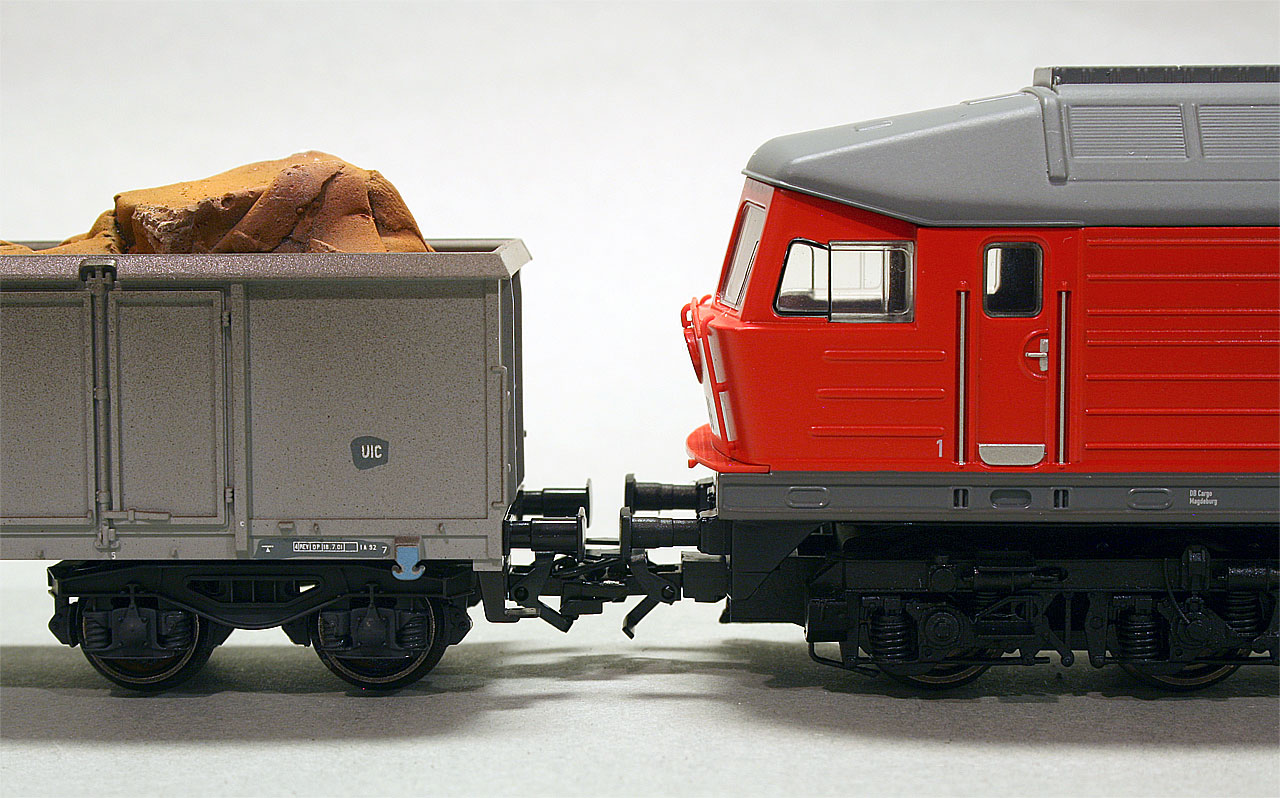 The model comes prepared for sound. There is a built-in resonance chamber for the loudspeaker. All you need to do is to buy a sound decoder with a speaker and mount them. If you own the a version with the built-in decoder, you will need to replace the main circuit board as well. Märklin makes decoder packages including replacement circuit boards, so replacing the main circuit board is no problem at all. The installation is very easy - only a little soldering is needed.

The sound in the set 232 420 is good and you really get the impression of a diesel engine running. I am not sure whether or not the sound is actually a class 232, but it does sound like one. You should turn the volume down, because it is really loud by default. As with other models, when the volume is at a tolerable level, it is barely noticeable due to the running noise of the locomotive and the train itself. The sound illusion works best when the locomotive is idle or at low speed.

The boggies have two axles powered each, the third axle is purely cosmetic. The power pickup is a clip-on power pickup which on the Trix version picks up power from the wheels, on the Märklin version it picks up power from the third rail. The system is very nice, many newer Märklin models uses the clip-on system, which means that converting Märklin models from 3-rail to 2-rail is actually quite easy. Märklin should be more informative about this fact - perhaps just throw the 2-rail power-clip along in the box. Easy, no more "2-rail or 3-rail"-versions.

The model have metal cog wheels which does create a weak grinding noise when the model is running.

If you have a LokPilot installed, you can tune the motor on a Märklin or Trix hobby locomotive by changing CV values. This will greatly enhance the running characteristics of the model and reduce the noise from the engine.

CV 2 is the minimum speed of the motor, you can change this to whatever you think is right for you.

The model is a very good model indeed. I like the fact that every model comes prepared for sound, so all you need to do is buy a sound decoder and a speaker and mount them. You do not need to do any milling or other crazy stuff to make the sound equipment fit.

The lighting is yellow LEDs, but if you have the skills, you can replace it with warm white LEDs. I hope that Märklin and Trix will one day stop putting yellow LEDs in their locomotives.

Before you buy a model of this particular class, you need to know, that there are more detailed versions on the market, and at the almost same price as the Märklin and Trix versions. I would recommend that you try out some of the different models before settling. The model from Roco is an older model, with no LEDs (but still great lighting) and you will have to be creative with the sound equipment if you want sound. So I guess it is a matter of how you look at things.

If you are in the market for a good, heavy diesel locomotive, straight from the box without having to fit additional detailing and easy upgrade with sound. The Trix or Märklin version is for you.