Here we go again, PIKO continues its venture into the market for standard models, so called "bread and butter" models, that you can buy from almost every other major manufacturer.

Once again, PIKO do this with the same approach that it has the last couple of years. The models are state-of-the-art with regards to electronics as you would expect from new models these years, they are finely detailed and they come at price point just below the established market.

I am not going to highlight every new model here, but here is my view on two models that caught my interest. 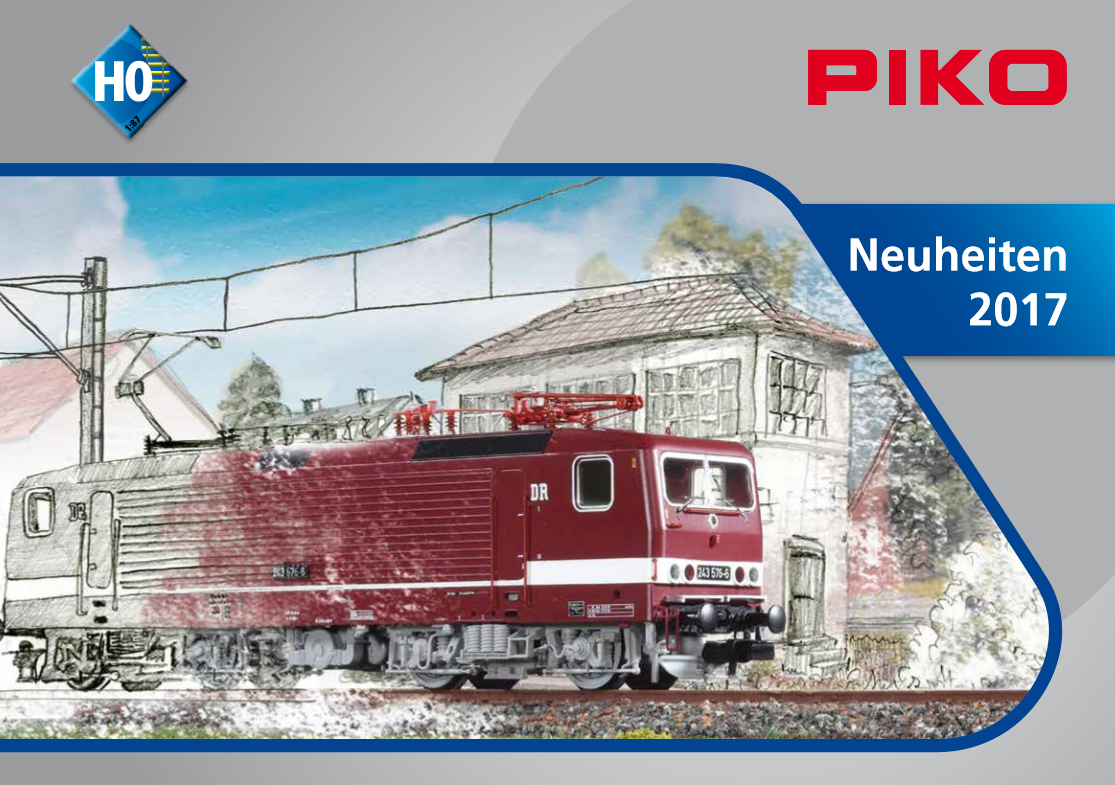 The front page of the PIKO new items brochure 2017 features a DR class 243.

The class VT 98 is the famous German rail bus, the one that you can get from every manufacturer and in later years at every price point (The Roco model starts at 99 € which is a really good bargain).

We have yet to see PIKO's model, but I assume that it is based on their experiences with the N scale version from last year. If that assumption turns out to be true, I bet you that it will be an awesome model.

According to the PIKO product database, the model will feature a Plux22 decoder plug, LED lighting, lighted destination signs, power conducting couplings, lights at the engine driver's seat. Basically all the bells and whistles that you can expect from a modern model. The non sound models starts at 199 € including a driving trailer.

Several new Ludmillas are in the new items as well!

Where does this leave us modellers? We currently have some options with regards to the VT 98.

The Roco model is old and comes with old technology. If you install sound into the model or simply install a decoder, you will loose half the interior details in the motor unit. On the other hand the model has the option to bring along a goods waggon and you can separate the driving trailer from the motor unit when it is not needed. Both of which are a must have when operating the model in a prototypical way.

The Roco model has not been updated for ages and even though the price is very good, I would rather pay a bit more and get a state-of-the-art version from PIKO. If Roco chooses to upgrade their model with newer tech like LED lighting etc., it will still be a worthy competitor to whatever PIKO comes up with. The Roco model is still that good.

There is also the Trix (Märklin) model which is a very good looking model, it does not completely suffer from the same problems with interior details as the Roco version, but it does suffer a bit when you add sound to it as you can see the resonance chamber between the seats in the motor unit. Later revisions of its sibling, the class VT 95, have been without this problem. I expect Märklin to upgrade their VT 98 in a similar way.

Compared to Roco, the price is through the roof on the Trix model and I find it difficult to justify investing in the model. I never really considered the model for myself because of the price tag. The design also lacks some features that makes it hard to operate the model in a prototypical way. One of them is the driving trailer being permanently coupled to the motor unit which is annoying. Trix and Märklin also do not provide a solution for the motor unit to bring along a goods waggon. I do not expect drawbacks like these on a 300+ € model. The model looks astonishing, but it is hard to operate it in a prototypical way and being able to do so means a lot to me.

So far the model from Roco has been my preferred choice, even though an update is long overdue. PIKO might take this market from Roco now. Knowing PIKO we will see all sorts of variants of the VT 98 in the coming years.

If the PIKO rail bus follows the fine standards of the later years, Roco will have a hard time justifying their outdated model. Trix and Märklin will need to reconsider their pricing strategy - or at least find a solution to operate their model in a prototypical way.

Another cool new item is the class 110 "Bügelfalte" and the class E 52.

The alternatives are sparse again. We have Märklin which only releases their class 111 in the AC range, so there is no Trix option here. The Märklin model is old and thus lacks some details. The model comes with the old motor design and that itself discourages a lot of people from buying it. That being said, the motor is a five pole and the model runs very well, but it is a really noisy motor design. Installing a sound decoder in the Märklin model is not something I would do, as you will only be able to hear the operating sound when the model is parked, or if you turn the volume up to a very high level. None of these solutions are appealing to me.

Later releases of the Märklin class 111 has seen technology upgrades such as moving pantographs, interior- and prototypical lighting (being able to turn off the red taillights). These are fine upgrades and it does lift the play value of the model quite a bit, but it cannot change the fact that the model is based on an old design and that an update is long overdue. Compared to what you get, the price is through the roof and that will scare potential customers away.

The Roco model is slightly more detailed, but old as well. The motor is the standard Roco five pole motor that I have come to love. The model runs very well but the lighting technology is really bad. The model is also very difficult to take apart and reassemble. Not that it matters much, but it can be annoying when chipping it. The model has a standard 8-pin plug meaning that prototypical lighting is out of the question. The price point is a good one though and you will get value for your money.

PIKO's model comes at a reasonable price point, just around the same as Roco, but the model will feature the latest and greatest with regards to lighting and this is really appealing. I am curious to see how the detailing is, it does not take much to beat the current line up, but the Roco model really looks good and basically only needs an LED and Plux22 update. If the PIKO and Roco models are comparable with regards to details, yet again, Roco will have a challenge on their hands; The only solution for Märklin would be to design a new model.

We will have to wait for the models to make the final judgement, but the PIKO new items sure draws a promising picture for 2017. I am really looking forward to seeing the models in action and I think PIKO is on the right path here. The models work great, they run great, they are finely detailed and the price is just right. Amazing!

I have a feeling that 2017 will see a dramatic increase of PIKO locomotives pulling trains on my layout. I might begin to part ways with some of my models that no longer live up to these standards.