The Märklin point mechanisms for the C track are magnetic and thus gives you the "click, click" operation of your points. With the Viessmann universal point motor (Viessmann #4554) you can now get slow moving points just like you see in real life. 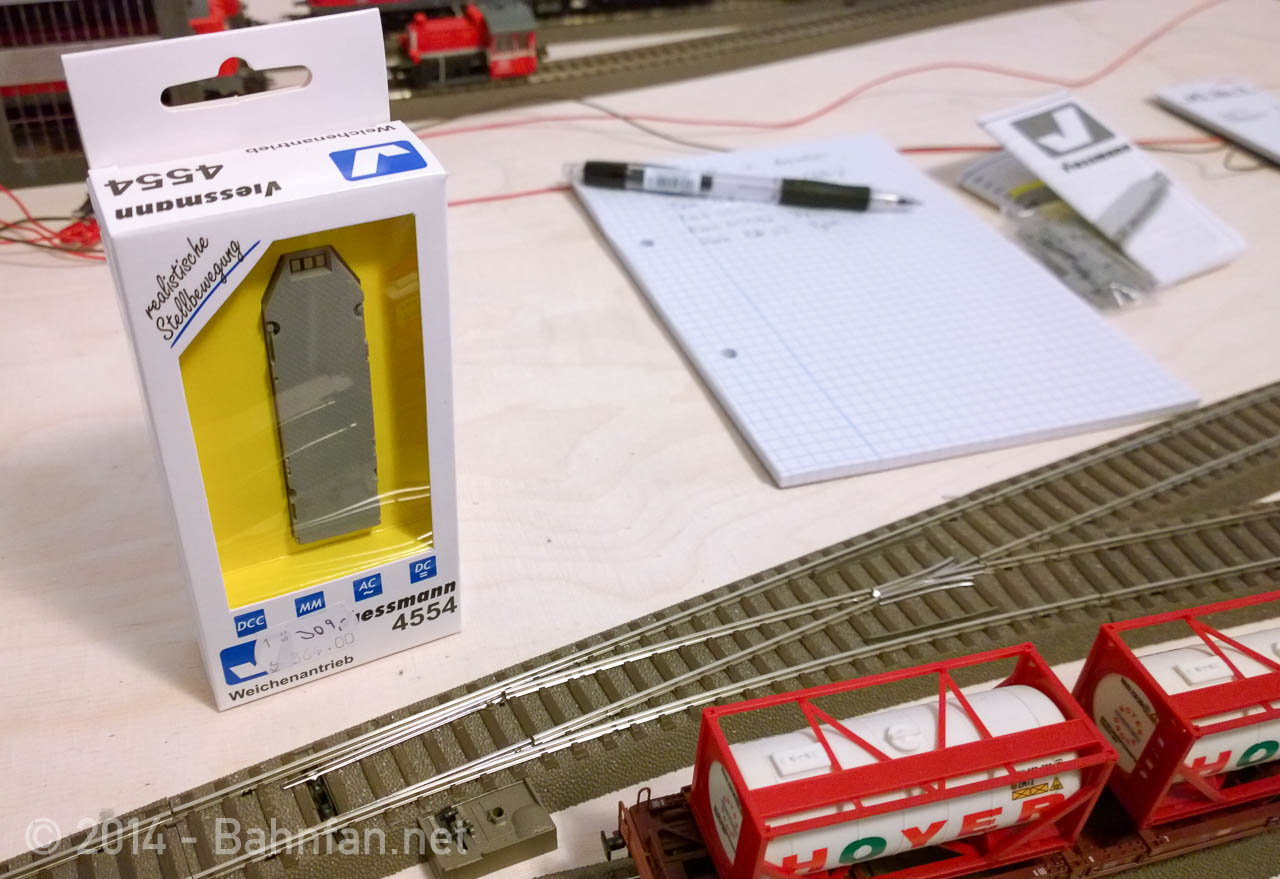 The Viessmann point motor is a universal motor. This means that it will work with a lot of different points from a lot of manufacturers.

The package contains the motor itself and an accessory bag with relevant accessories for a large amount of points from different manufacturers. 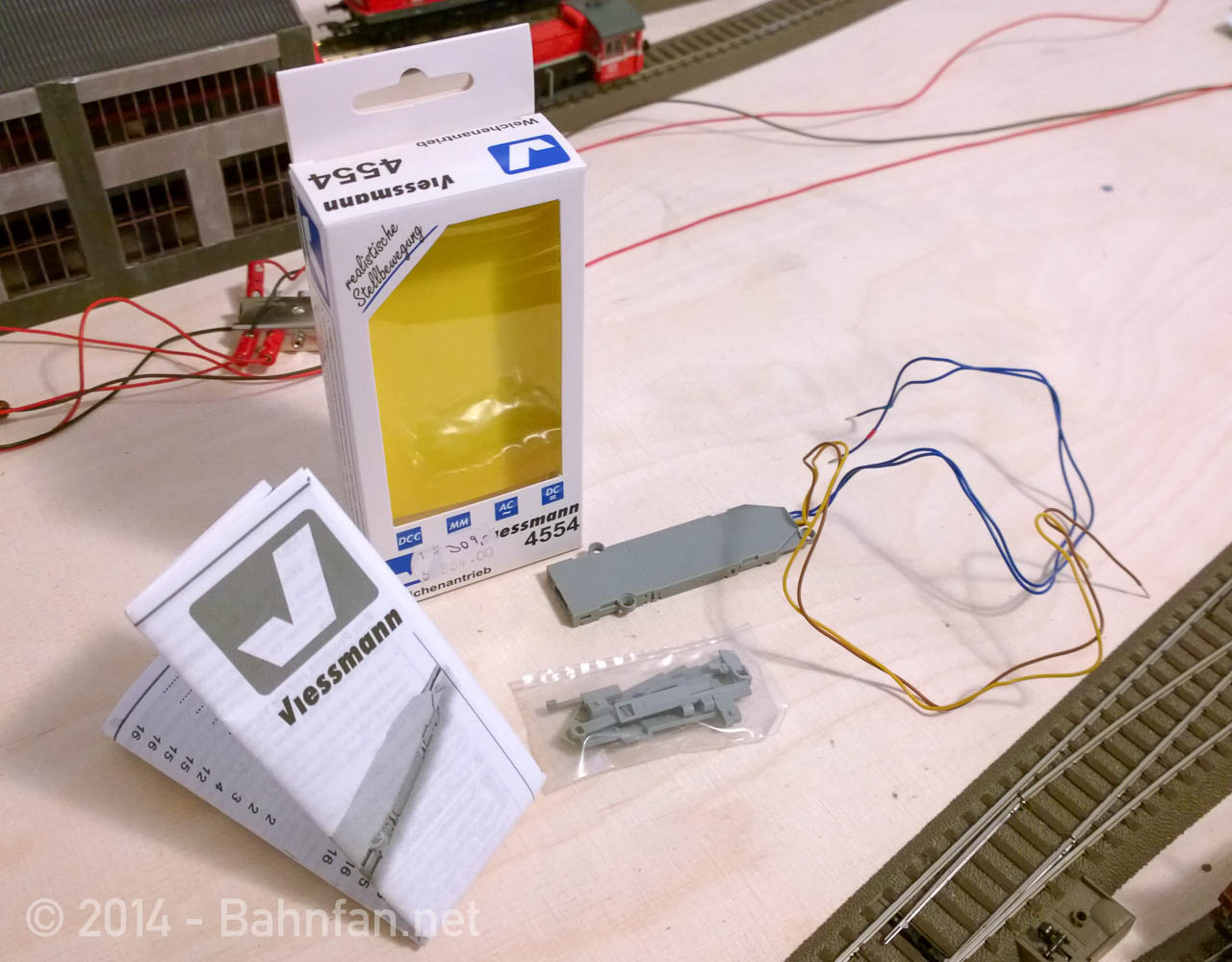 When you install the motor you simply assemple the accessories relevant for your point according to the instructions and off you go.

The accesory bag contains pieces that will allow you to operate points from:

You can possibly make it work with other tracks as well.

The point motor features built-in decoder for DCC and MM (Märklin Motorola). Can be operated analogue as well.

As mentioned you assemble the motor according to the instructions. The process is easy. For the C track I had to use lever number 3. The levers have their number printed on them so they are easily located in the bag. 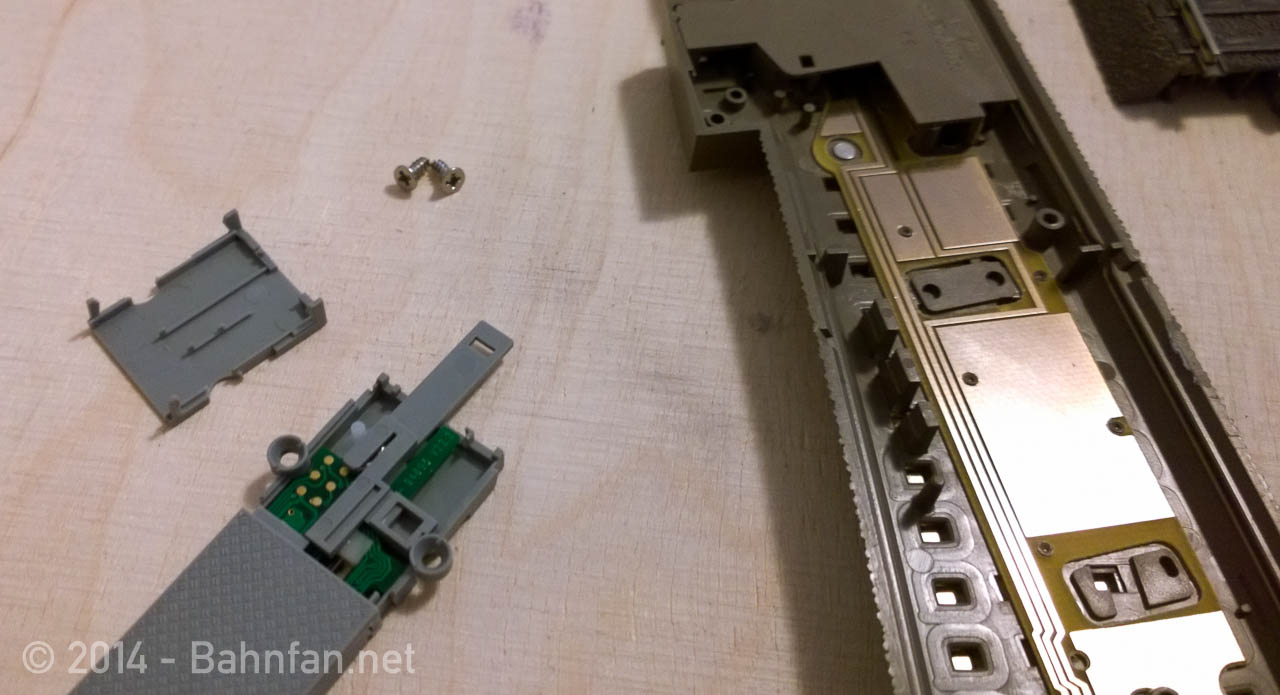 After you put the cover plate back on, the motor is ready to be mounted. This is also where the problems show up. Even though Viessmann says that the motor is compatible with all C track, it is not really the case. I was mounting my motor in a Trix slim point (Trix #62711). As the picture shows the holes for the screws are off by a milimeter. 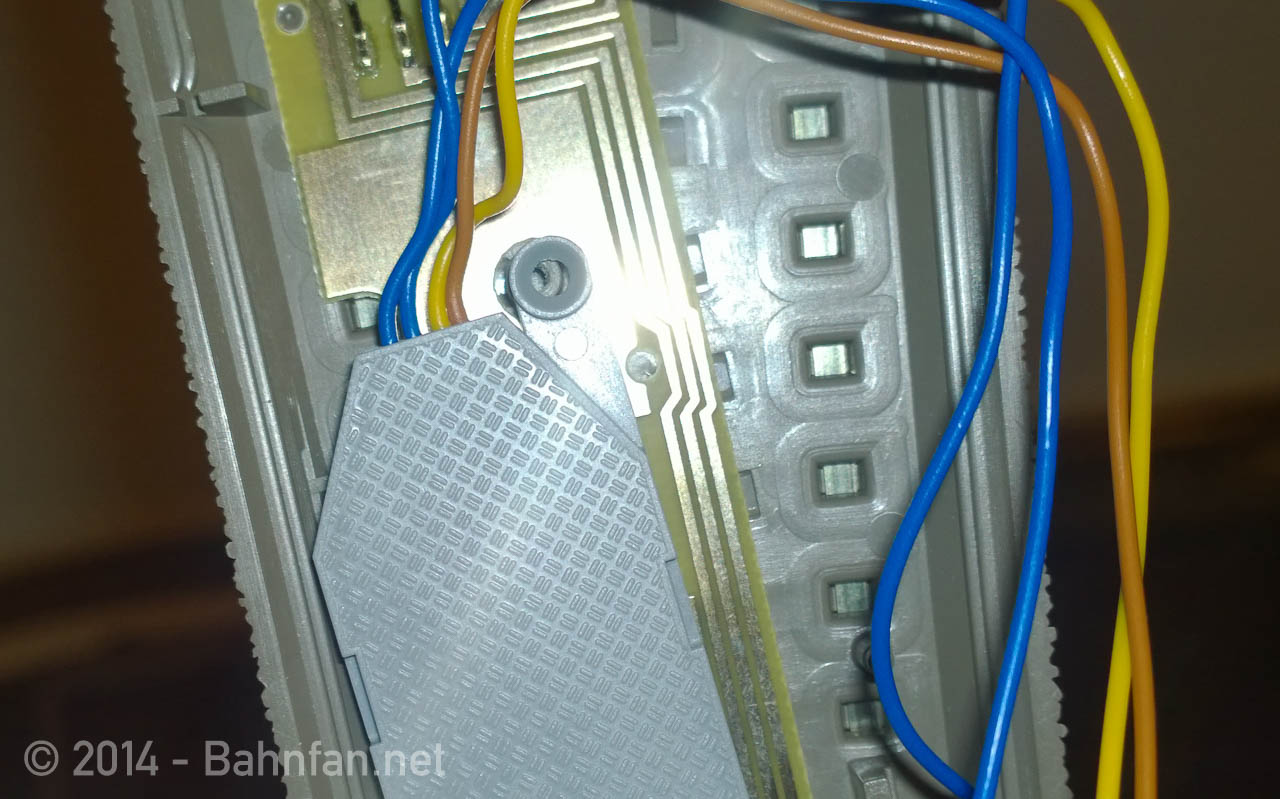 There was no way that the drive would fit into the point roadbed. This is annoyed me, I mean, you pay 49 € for the thing. I tried different solutions, but eventually I had to face the fact that the casing is badly designed. It simply would not fit. I decided to modify the casing a bit by filing some of the plastic off. 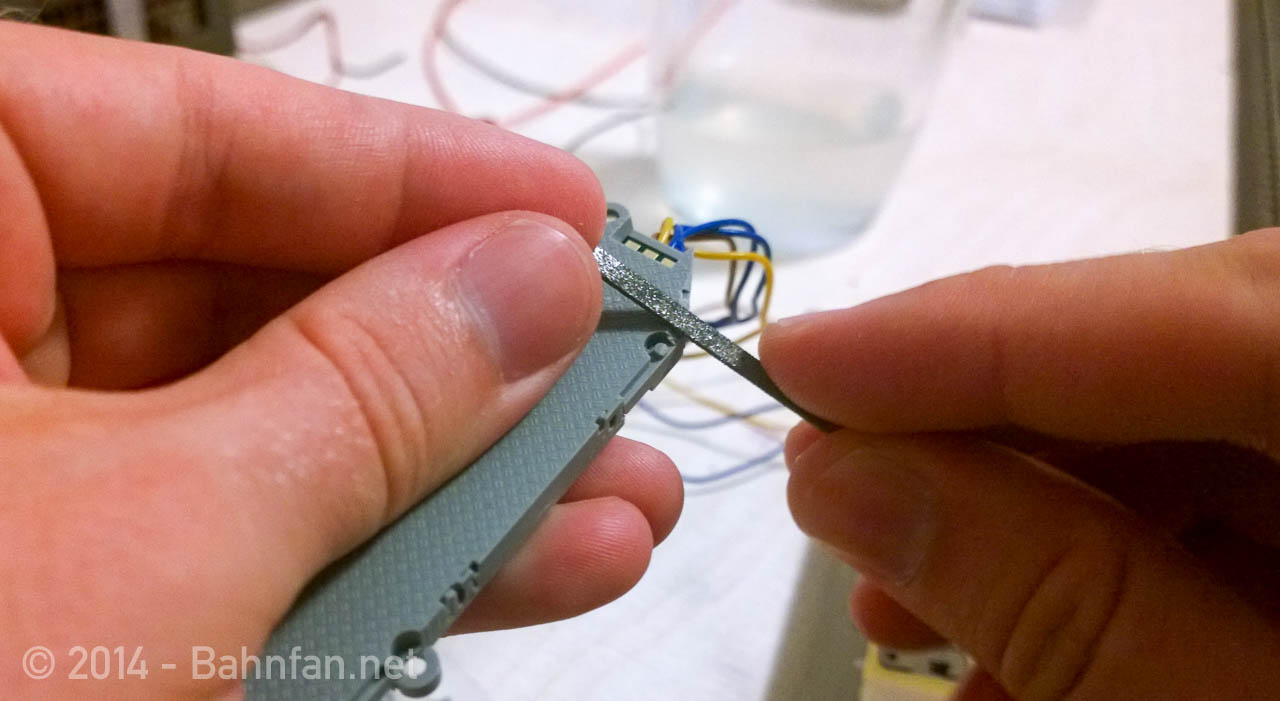 You do not need to remove much, just enough for the drive to fit into the point roadbed. 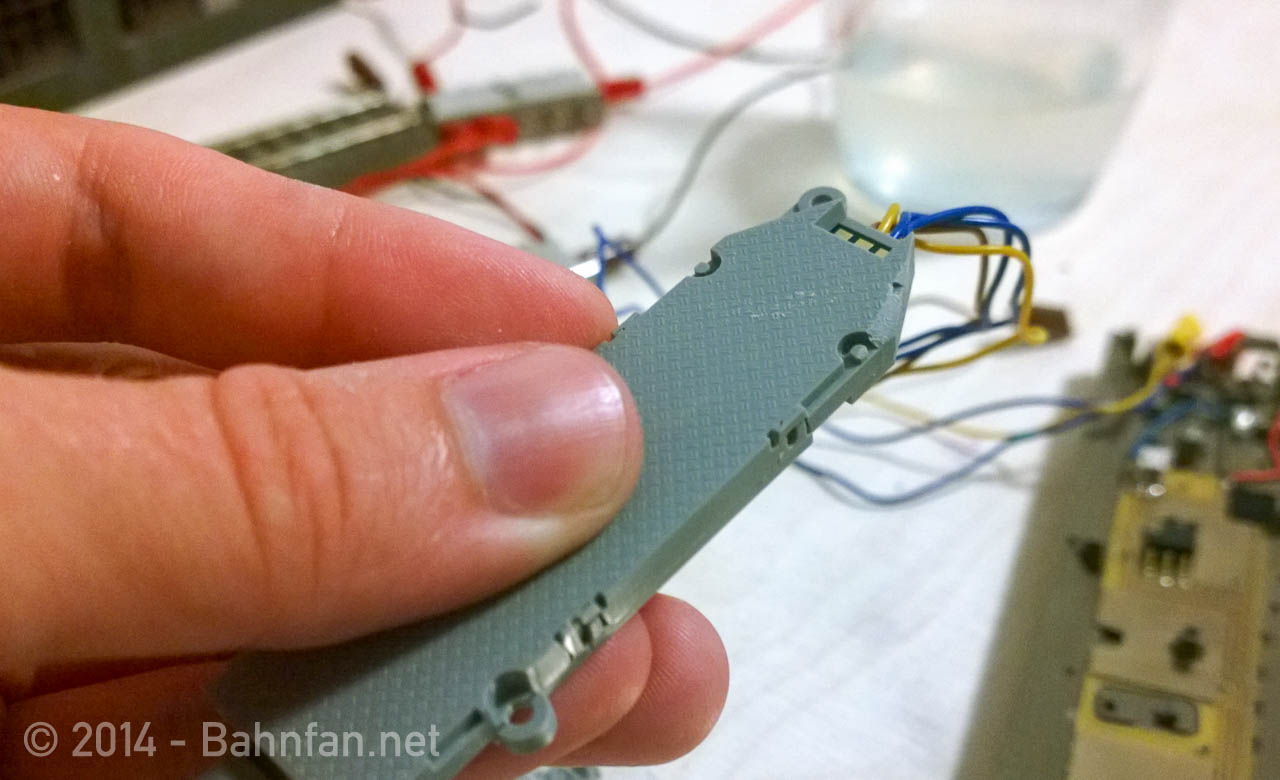 After I modified the casing the drive was easy to fit into place. 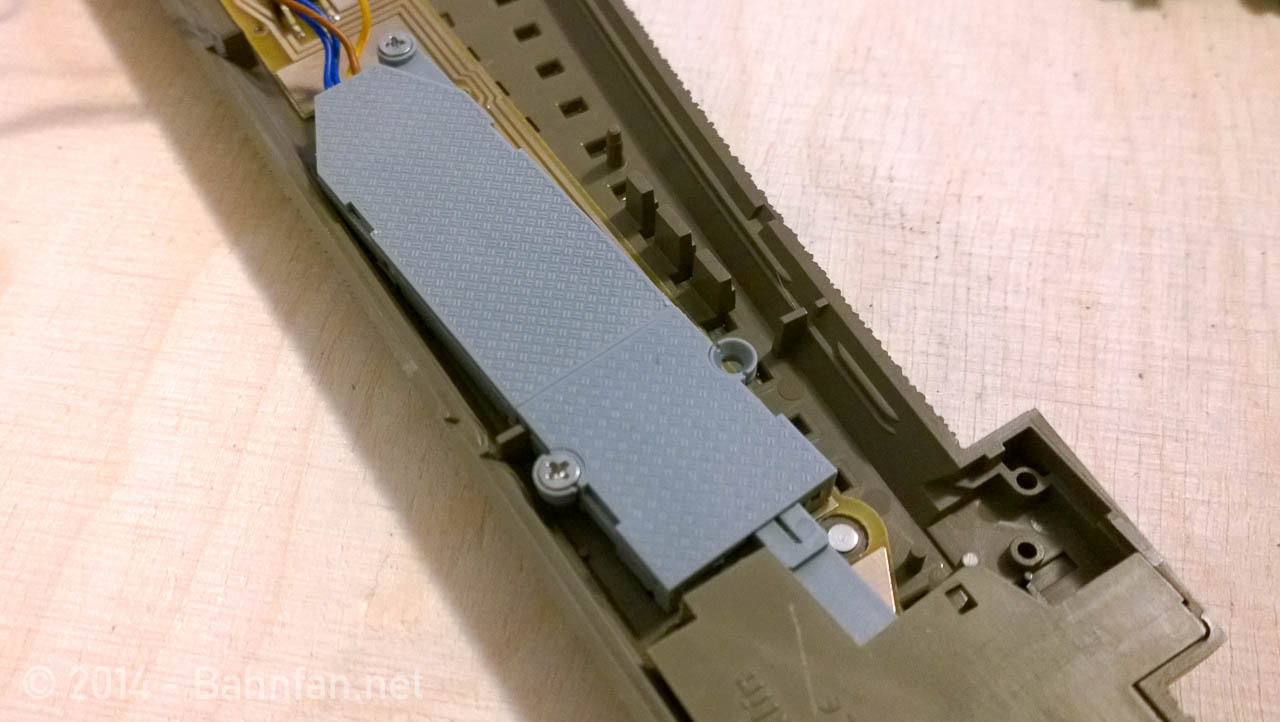 This video shows the final result. The motor is a bit noisy, but I guess this is what you would expect.

The programming is fairly straight forward. You can use either DCC or MM (Märklin Motorola). I prefer using DCC. You can program the motor using either CVs or by having it listening for a switch command. When the command appears it will take the address of the switch command sent. I prefer the latter method, because it is dead simple.

The packaging is very nice and the instructions are fairly well written and easy to understand. The programming is straight forward. I was a bit annoyed with the fact that I had to modify the drive to make it work with my C track. This is simply not good enough. When the drive is finally mounted it performs well. Time will tell how well and how long.

The decoder is built-in which means that you will have to replace the entire motor and decoder if either fails. I do not like this, because it is potentially expensive.

Can I recommend it? I do not really know. I mean, I like the concept of having a slow moving point, but I also think that the product has disappointed me a bit. I hate when I need to modify stuff to get it to work as intended. When modified it works perfectly.

My advise is this: If you want to try it out, please do so, but be advised that you might not feel that it is worth the money you pay. I might buy some more if they turn out to be reliable, but this is only because the Märklin motors are not good. If they were fine, I would use them instead. Simply because the decoder is separate from the motor itself.

Update: As of May 2015, Märklin updated their motors so they are now free of the problems that caused earlier motors to fail. I have not had any problems since. I have switched back to using the Märklin motors because of the reasons described.